Manchester City responded to Liverpool’s win over Watford earlier in the day by easing to a 2-0 victory at Burnley that sent them back to the top of the Premier League table.

Pep Guardiola’s side went into the game at Turf Moor knowing that anything but three points would see them go into next weekend’s showdown with Liverpool – live on Sky Sports – behind their title rivals.

Man City also face a Champions League double-header against Atletico Madrid in the coming weeks, but Guardiola warned before the game his side could not afford to overlook the challenge presented by Burnley.

Fortunately for the manager, his team appeared to listen to his warning, with Kevin De Bruyne giving them the lead after just five minutes when he latched onto Raheem Sterling’s cushioned pass and drilled a first-time shot into the top corner of Nick Pope’s net.

City tend to enjoy themselves against Burnley – they have now won their last 10 games against the Clarets by an aggregate score of 34-1 – and they doubled their lead 20 minutes later in similar fashion, with Sterling once again finding space on the right before squaring for Ilkay Gundogan, whose strike took a slight deflection off Kevin Long to wrong foot Pope.

With so many important fixtures on the horizon, it was perhaps understandable that City appeared to ease off after going 2-0 ahead, although they did continue to create chances.

Sterling volleyed high and wide with Pope stranded after Phil Foden found him with a clipped through ball, and Foden then saw his clever back-heeled volley from Joao Cancelo’s cross kept out by the Burnley goalkeeper.

Gabriel Jesus was introduced with just under half an hour to play and appeared determined to end his sweep run in the Premier League, with his last goal in the competition coming in September.

But the Brazilian – looking short of confidence – missed a number of chances, including an effort that came back off the post and a volley over the bar from yet another Sterling cross.

As for Burnley, they were unable to muster much of a comeback, with Jay Rodriguez’s effort from the edge of the area after Jack Grealish was caught in possession the closest they came to troubling Ederson.

The Clarets have now failed to score in their last four league games – their longest run without a goal in the competition in nearly seven years – and they remain 19th in the Premier League, four points behind 17th-placed Everton, who take on West Ham on Sunday, live on Sky Sports.

Burnley’s next game is against Everton on Wednesday, also live on Sky Sports.

Guardiola praised his Man City side’s ability to adapt to conditions at Burnley, particularly the “high” grass that greeted the champions at Turf Moor.

“After the international break you never know what is going to happen,” said Guardiola. “Especially today, the conditions of the pitch were so difficult because the grass was so high. But we adapted.

Pep Guardiola says Manchester City had to adapt to difficult conditions in their win at Burnley, but felt his side was always fairly comfortable

“In the second half we had two or three chances to kill the game, but unfortunately we couldn’t do it.”

Asked whether he felt comfortable that his side would take all three points after their early goals, the Man City boss added: “A little bit but the game was not over, and in the second half they pushed a little bit more.

“They decided to play 4-5-1, now they play 4-4-2. They were more aggressive and it was a little bit more complicated. The fact that we could not score a third goal meant it was more open.” 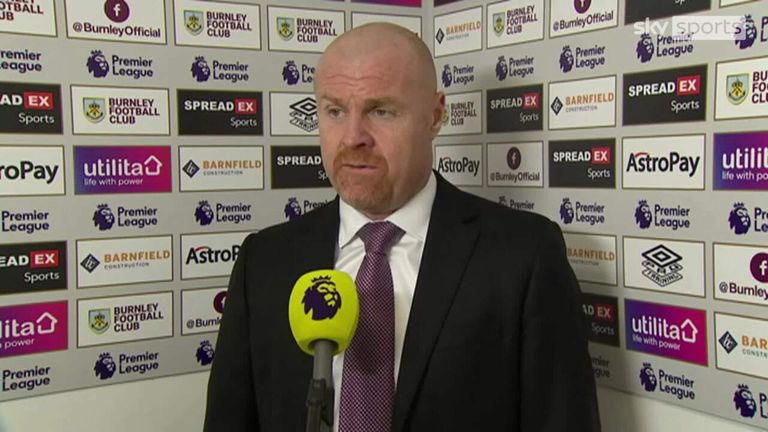 Sean Dyche admitted De Bruyne’s goal after only five minutes put paid to his side’s game plan, saying: “They’re a top side, we know that. They put out a very strong side, which they can do, of course.

“We had a game plan to try and get a foothold in the game and try to control their good play, which they often have, but when you give a goal away in five minutes, that sometimes affects that quite considerably.

“Then we gave away a second one, but I thought some of the play in the second half reminded us of what we’re about.

“We haven’t had a game for a few weeks [and it] looked like that. I thought in the first half in particular, they anticipated the game far quicker and the goal was like that. The ball goes over our heads and we’re caught a little bit ball-watching.”

Burnley moved away from their trademark 4-4-2 formation for just the third time in the Premier League this season, with Dyche’s plan to “control” Man City seeing Jack Cork starting in place of Maxwel Cornet in a bid to beef up the midfield , but the manager admitted his game plan was undone within five minutes thanks to De Bruyne’s early goal.

In truth, the chances of a home win over the champions were slim regardless of Dyche’s tactics, given Pep Guardiola’s team’s regular dominance of the Clarets, but starting with Wout Weghorst as a lone striker seemed particularly negative.

The giant Dutchman is undoubtedly a threat to opposition defences, but launching long balls towards him without anyone there to attack the second balls was a curious tactic that saw Burnley record just three touches in the opposition box in the first half.

Dyche appeared to acknowledge the issue in the second half, bringing on both Cornet and Jay Rodriguez and moving Josh Brownhill into a more advanced position, but it was too little too late, particularly against a Man City side that have not dropped a point from winning positions in the Premier League this season.

Weghorst ended the game with zero shots, zero touches in the opposition box and fewer than 50 per cent of his aerial duels won, which outlined the toothless nature of a Burnley attack that relied on his prowess in the air.

With just 10 games remaining for Burnley to make up a four-point gap on Everton – who have a game in hand – the onus is on Dyche to get more from January signing Weghorst, who was brought in to help stave off relegation but now has just one goal in 10 league games.

Player of the match: Raheem Sterling

Sterling could have ended the game with a hat-trick of assists but had to make do with two after laying on the goals for De Bruyne and Gundogan with neat passes from the right wing.

Manchester City are in Champions League action on Tuesday as they host Atletico Madrid in the first leg of their quarter-final; 8pm kick-off. Then on Sunday, April 10 it is a potential title-decide at the Etihad as City host Liverpool live on Sky Sports Premier League; kick-off at 4.30pm.