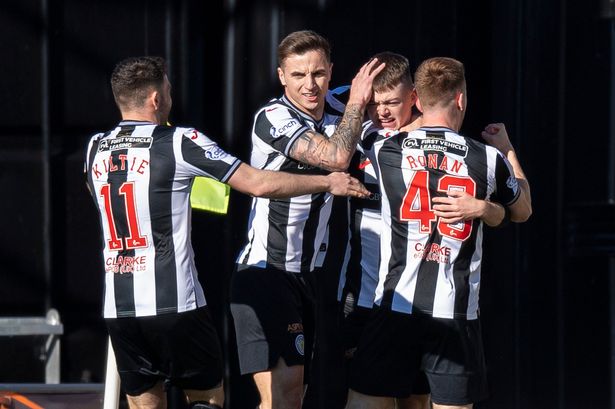 Sometimes a wee break can do you the world of good.

I was very fortunate to get some time off last week and spent most of it down with my family and friends in Cheltenham.

The trip also happened to coincide with Gold Cup week, and I was lucky enough to be in the thick of it at a gloriously sunny Cheltenham Racecourse at 3.30pm when the main event kicked off last Friday.

Of course, the two horses I backed were nowhere near first when the pack came hurtling up towards the finish post.

Such is my knowledge of horse racing, you’d be much better off avoiding betting on the ones I plumped for.

Nevertheless, with a (much) lighter wallet and a slightly more pickled liver it was still great to be able to put the out of office on and switch off from the world of work for a few days.

After the painful end to last Saturday’s clash with Dundee United, some of the St Mirren players were probably wishing they were on holiday already.

And some Saints fans would likely argue some of them looked like they’d already checked out and had their feet up in the departure lounge ahead of the summer.

The race for the top six this year looks tighter than it’s ever been, with so many clubs jostling for position heading into the last straight.

Luckily for the Buddies, most of their nearest top rivals also suffered defeat last weekend.

That means that while they didn’t enhance their own position, crucially not much ground was actually lost.

What is clear is that manager Stephen Robinson needs to whip his side into shape quickly to have any chance of keeping up with the chasing pack.

Despite racing ahead last Saturday thanks to Jay Henderson’s early strike, another beauty to add to his collection, the Buddies fell at the last when Marc McNulty netted deep into injury time.

While Robinson was quick to point out that extra-time should have finished two minutes before McNulty’s winner, he also admitted his boys didn’t deserve anything from the game after a dismal second half performance.

But all is not lost as St Mirren essentially face two cup finals before the split in the shape of Motherwell and Rangers.

Still sitting just three points behind fourth spot, everything is very much still to play for as the Saints look to pull off the result they’ve been chasing for many years now – a top six finish.

Robinson pulled absolutely no punches in his interview in yesterday’s Paisley Daily Express, revealing he is already building a squad capable of challenging for a top half berth every single season, and telling those who aren’t part of his plans their future lies elsewhere.

He also said that close isn’t good enough for him, and it’s clear he doesn’t want to be pipped at the post either this season or any subsequent campaign.

Hopefully his stirring words will have lit a fire under some of the Saints players who may need one final push to get over the line.

Several of the players in this current squad suffered last season’s painful near-miss when a late suckerpunch from Hamilton cost them a place in the top six at the death.

None of them will want to go through that heartache again, even if there are more challengers this time around.

The target was set at the start of the season and it remains tantalizingly close to being achieved.

A win at Fir Park would give the Buddies a huge boost heading into a final crunch pre-split clash with Rangers in Paisley.

St Mirren needed to take it one hurdle at a time, and picking up all three points against Robinson’s old employers Motherwell would give the Paisley club a huge chance heading down the final stretch.

One thing I would recommend is for Buddies to hold onto their hats, because there’s still likely to be a few upsets and shock results over the next two weeks.

Hopefully St Mirren can stay the course and end up the right side of the top six finishing post this time around.