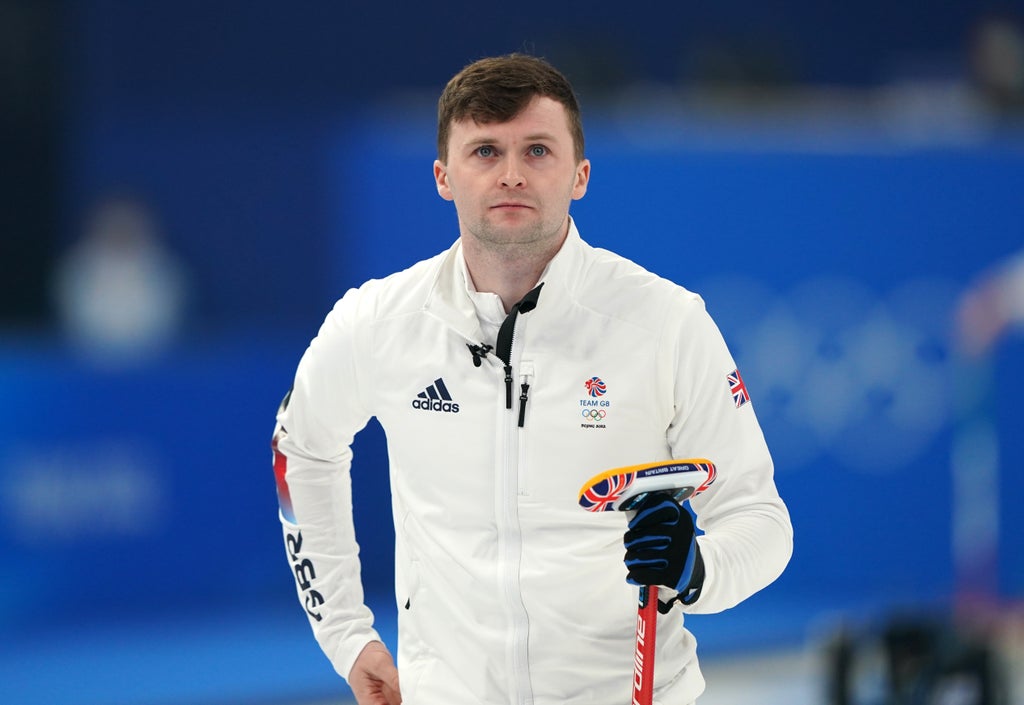 And now it really is all about Eve.

With just over 24 hours of these Olympics remaining, Great Britain are finally off the mark but it’s silver, not gold, as Bruce Mouat lost a tense and tactical men’s curling final on an extra end.

Women’s skip Eve Muirhead, watching in the crowd, now knows it comes down to her if Team GB are going to avoid leaving a Games without a gold for the first time since 2006.

Sweden’s Niklas Edin was once dubbed the ‘John McEnroe of curling’ for bad-tempered outbursts early in his career but this was an ice cool display at the expense of the youthful Mouat, at 27 the youngest skip in the entire tournament.

Edin, nine years Mouat’s senior, dominates his sport like no other player, winning five world titles but losing in the Olympic final four years ago in PyeongChang, while taking the bronze in 2014.

Mouat’s rink have been the form team at the Olympics, winning eight straight games before this final but in the end canny Edin outfought and outmaneuvered them. In a match lasting nearly three hours, tension slowly ratcheting up with every stone, he always seemed to have a vice-like grip.

“This result drives us forward, we’ve put in so much work over the last five years, we won’t let that go to waste,” said Mouat.

“We’ll be driving even harder to get that gold medal next time. Niklas has had such an impressive career and he’s one of the best in curling history, he’s an example of what we can do in four years’ time.

See also  Why you could be cleansing your face all wrong

“We just need to get to that point again but make the result different. It was pretty close but we gave them too much of a head start.”

Both men are too polite to call this a grudge match, after all this is curling, where brooms are always neatly placed and very rarely hurled.

However, Mouat and Edin’s rivalry already dominates their sport, Edin starting this match with a narrow 12-10 advantage in the head-to-head standings.

The Swede won the world title against Mouat’s rink in Calgary last year but the British skip has had his measure since.

Mouat, Grant Hardie, Bobby Lammie and Hammy McMillan beat Edin twice on his way to the European title in Norway last year and edged their round robin game here in Beijing. But on the biggest stage of all, Edin played the perfect game, dead eye unerring whenever he really challenged.

It was tight, attritional and high-quality game, one for purist said experts, with both sides looking to force each other into mistakes, Sweden stealing a shot in the third end and Great Britain nicking it back in the seventh.

Mouat played a pressure draw to force an extra end but Sweden had the crucial advantage of the hammer – the final stone – and they made it count to win 5-4.

“We’re still very proud, particularly how we played all week,” said vice skip Grant Hardie. “At the moment the overriding emotion is disappointment that we didn’t bring home the gold for everyone.”

Coach David Murdoch can certainly empathize with how his young team feels, having lost the Olympic final in Sochi eight years ago. The difference is, he was at the end of his competitive career, Mouat is just getting started.

“There’s longevity in the squad, they’re still in their 20s, Niklas is a little bit older so we’d like to think there’s years ahead for this sport,” he said.

“They’ve learned so fast to be sure, they’re already at the pinnacle of the sport and could have been champions and hopefully we’ll re-rack and go again.

“There’s no bigger stage than Olympic final and for Niklas to come out there and make some of the shots he did was incredible.

“He is the greatest in history for me. He’s won five world champions, gold, silver, bronze; there’s no doubt he’s the best.”

There was no new ‘stone of destiny’ but the future certainly does look bright according to Rhona Martin, who won Britain’s last curling gold 20 years ago in Salt Lake City

“They will be hurting right now, understandably so,” said Martin. “What a great week they’ve had. They probably can’t see it now but the future’s so bright for this young team. They are up and coming, there’s no doubt.

“They are phenomenal and it’s exciting what lies ahead of them. Our boys can be so proud of what they’ve achieved.”