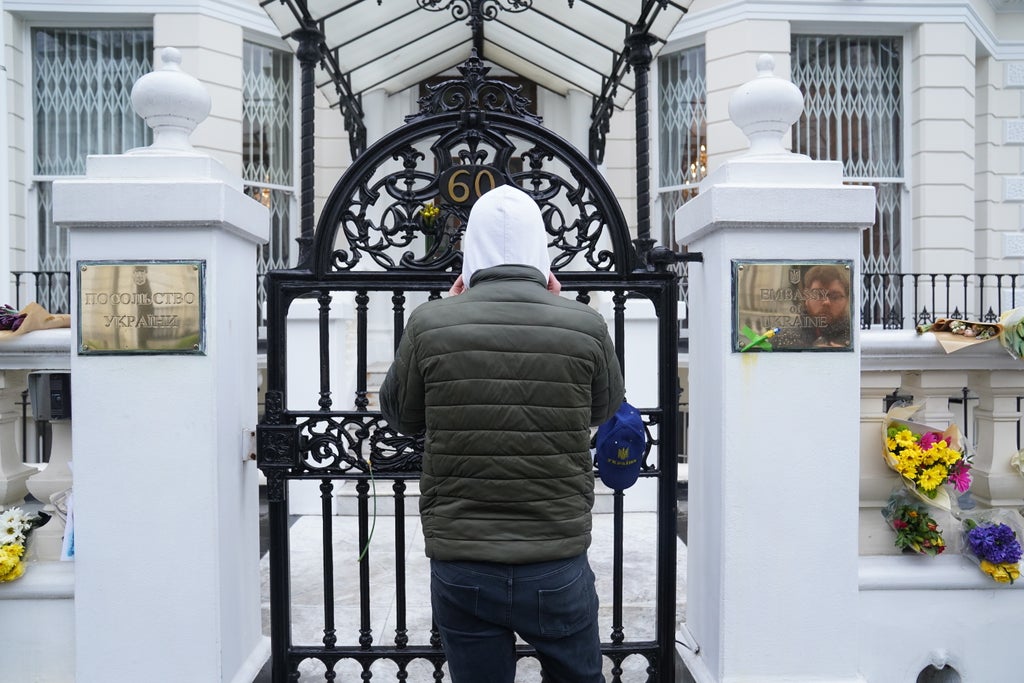 British people signing up to fight alongside Ukrainians say they are doing it out of “solidarity” and because “it’s the right thing to do”.

A steady stream of people arrived at the Ukrainian embassy in west London on Tuesday to volunteer to fight against Russia’s invasion.

Roger Conway, from Newcastle, immediately sent his information to an email address he collected at the embassy gate.

He has no Army or conflict experience but is keen to help.

He told the PA news agency near the embassy: “I’ve never been in but I’ve not got kids, I’m 34, feel fit.

“We’ve convinced ourselves that we’re stepping in and we’re helping by having Facebook photos and tweeting solidarity but it doesn’t really make a difference to anyone.

“Solidarity doesn’t look real if you don’t do anything.”

He has “absolutely no idea” where he could be sent and assumes he will receive training from the Ukrainian military.

Mr Conway, a finance contractor, said he does not need to inform anyone at work about his decision to go, and he is not really in touch with his parents.

Asked if he is scared, he said: “Possibly a little but that’s no reason not to do anything in life. I’m ready, I think.”

While he does not know any Ukrainians well, he said he has the impression they are “nice people” after spending six weeks traveling around the country in 2018, including to Kyiv, Odesa and Kharkiv.

Ukrainian President Volodymyr Zelensky has announced the formation of an “international legion” to help defend his country and appealed to foreign volunteers to come forward, promising them arms to fight against Russian troops.

Foreign Secretary Liz Truss said she would “absolutely” support British nationals who chose to go to help fight against the Russian invasion, though several of her Cabinet colleagues and Downing Street officials later effectively contradicted her, discouraging people from going.

Mr Conway described it as a “bit cowardly” of Ms Truss not to send UK troops while “egging on possibly untrained civilians”, though he said he is not “doing it for Liz Truss”.

Liam Hawkins, 30, drove to the Ukrainian embassy from Deptford, south-east London, to sign up to help refugees stuck at the border in a humanitarian capacity.

The 30-year-old father told reporters: “I haven’t slept since this invasion and I just can’t stay at home with my babies and my missus and do nothing.

“Right is right and wrong is wrong, regardless of nationality or creed or whatever.

“Sit there and count your money when this is going on next door? Doesn’t mean nothing, so I’m going to do the right thing.

“I know it’s dangerous, people are trying to talk me out of it, but I believe I can make a difference.”

Oliver Miller, 29, a mechanical engineering student from Chelmsford, Essex, said he is “hoping to go out and help somehow”.

“I don’t want to sound cliched and cheesy, but sometimes it’s something you feel like you have to do.

He said he has not told his “very supportive” family and girlfriend.

“Not sure how supportive they’ll be of this decision, we shall see.”

Andrew Duda, Wolverhampton branch chairman of the Association of Ukrainians in Great Britain, said he had “had some phone calls” from people in the UK wanting to travel to fight the Russians in Ukraine, but had referred them to the embassy in London.

He said: “Anybody that does want to fight, we’ve been told to advise them to contact the Ukrainian embassy in London.

“I’m not sure what the procedure is once people get to the embassy, ​​but that’s what we’ve been told.”

See also  Díaz reproaches Sánchez for his "incoherence" and his "opacity"