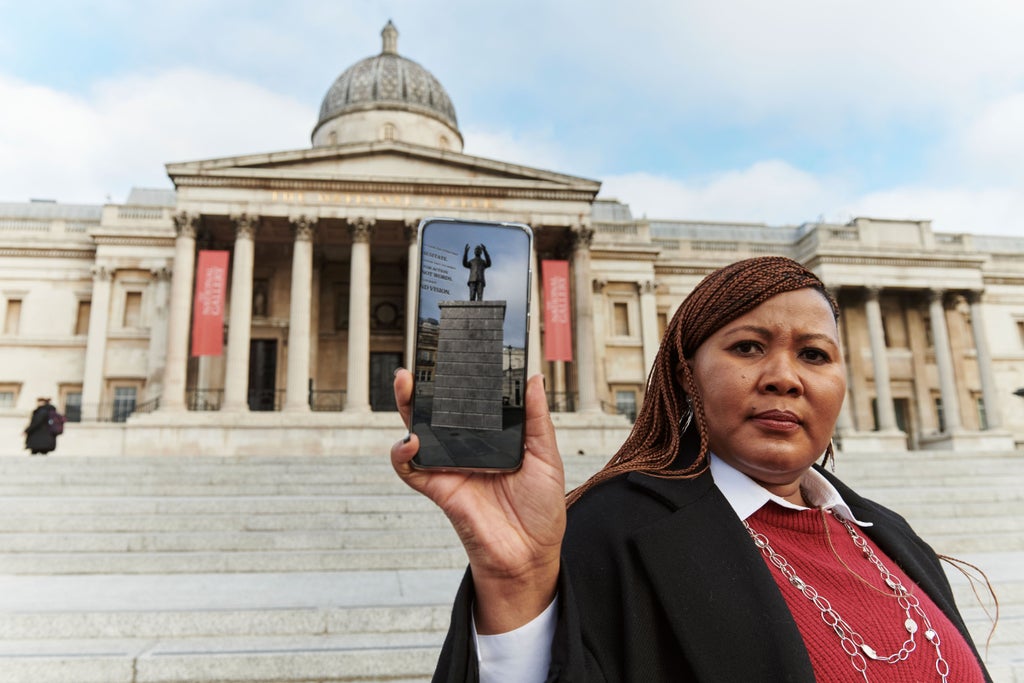 The granddaughter of Nelson Mandela has expressed concern around the lack of Black representation across the UK’s school curriculum and public spaces.

Tukwini Mandela, a businesswoman and campaigner, sat down for an interview with The Independent ahead of the 32nd anniversary of her freedom fighter grandfather’s release from prison in 1990.

The recent resurgence of the Black Lives Matter movement post-George Floyd saw numerous slaver statues toppled around the world, including in Britain.

Yet according to research, there are fewer than a dozen statues of Black people located across England and Wales – two of which are of Nelson Mandela in Parliament Square and the South Bank.

“Representation is crucial,” she said. “I think that when you’re so focused on your own story and not getting to learn others’ you forget that there’s more.

“Black history didn’t just start off with enslavement – ​​we were people before that. Nobody wants to talk about the Nubians who ruled Egypt for centuries, for example. People will talk about Black sports stars but what about Black doctors and neurosurgeons?

“People will talk about entertainment but I think it’s important to understand that we are a diverse people with many different interests and we’re not the ‘other’. We contributed to history long before the other events took place. The fight for justice is a lifelong one; it’s not just something that began recently.”

Ms Mandela, 47, went on to explain how it’s up to Black parents to educate their children about their history – particularly in light of the education system’s failure to do so.

“We have a personal responsibility to teach our children about their history and that lies with us, not the education system,” she said.

“Who is represented on school boards? Certainly not Black children or Black parents! That paradigm is not necessarily going to change; it will only change when we take responsibility for educating our own children.”

The campaigner was careful to add that she’s never saying ‘never’ but doesn’t hold much faith in mainstream schools and doesn’t “see light at the end of the tunnel when it comes to that mode of education”.

“I don’t necessarily think that a formal education is the right environment for Black children to learn about history,” she continued. “When I went to school, my Jewish friends went to Jewish school – they didn’t learn about their history from school. My Chinese friends went to Chinese schools.

Ms Mandela, whose mother Pumla is the daughter of Nelson Mandela and his first wife Evelyn Mase, also hailed social media platforms as being “important tools for amplifying positive lessons and engaging young people on the level where they are”.

This comes almost a year on from the publication of the widely contested Commission of Race and Ethnic Disparities which declared that the UK isn’t institutionally racist.

Following George Floyd’s murder in May 2020, Ms Mandela said that although it was encouraging to see young people from across the racial and cultural spectrum marching for justice, she worries about the movement’s survival.

“This is not a black and white issue, it’s an issue for all of us as human beings – if we believe in social justice for ourselves then we should believe in it for others as well. Black Lives Matter movements took place around the world including the UK and South Africa – however, my concern is the longevity of it,” she said.

“There’s been such a huge upsurge with so much media attention and then, a few months after that, things start to quieten down. I think that’s how evil persists – when we’re comfortable with where we are.”

“I don’t necessarily think that racism will ever stop, to be honest,” Ms Mandela continued. “But justice is the ability to be yourself no matter what the situation is; it doesn’t just apply to black people, it also applies to the LGBT+ community, for all people.

“It’s about being able to have honest discussions about things that are really uncomfortable for us – for people to be able to say, ‘this is what my experience has been’ and not be vilified or discounted for it.

“Justice is for people to be alive and not feel, for a Black person for example, that you can be shot by the police with impunity; it’s a sense of safety that you’re seen as a human being and not as the other or subhuman.”

This comes as Ms Mandela, along with Snap – the parent company of Snapchat – and the Black Cultural Archives on Friday announced the launch of its ‘Hidden Black Stories’ project that will unveil hidden stories of Black British and Black people in the UK through Augmented Reality (AR).

In an initiative backed by the mayor of London Sadiq Khan, the whole of Trafalgar Square will become an immersive history lesson, complete with digital statues of figures such as Nelson Mandela, Bill Richmond and Tom Molineaux, which members of the public will be able to view through Snapchat on a permanent basis.

A poll conducted by both organisations, along with Research Without Borders, found that over half of people (53 per cent) feel like they simply do not know enough about Black history, with just under half (47 per cent) agreeing that the current education system is not doing enough to teach children about Black history.

Lisa Anderson, managing director (interim) of Black Cultural Archives, said: “We are thrilled to be working with Snapchat on such an important initiative. Black Cultural Archives exists to collect, preserve and champion the histories of African and Caribbean people in Britain, so the opportunity to recognize these stories through cutting-edge AR [augmented reality] technology that reaches younger audiences is both exciting and powerful.

“British history is full of incredible Black people and hidden stories that deserve to be told. This Trafalgar Square lens is a dynamic, virtual sign of recognition, the second in a series through which Snapchatters will be able to learn about people they may not have heard of or know very little about.”

A Department for Education spokesperson said: “We want every young person to benefit from a broad and balanced curriculum, which helps them to thrive and achieve their potential.

“Pupils already have the opportunity to study significant figures from black and ethnic minority backgrounds and the contributions they have made to the nation, as well as helping them understand our shared history with countries from across the world.”