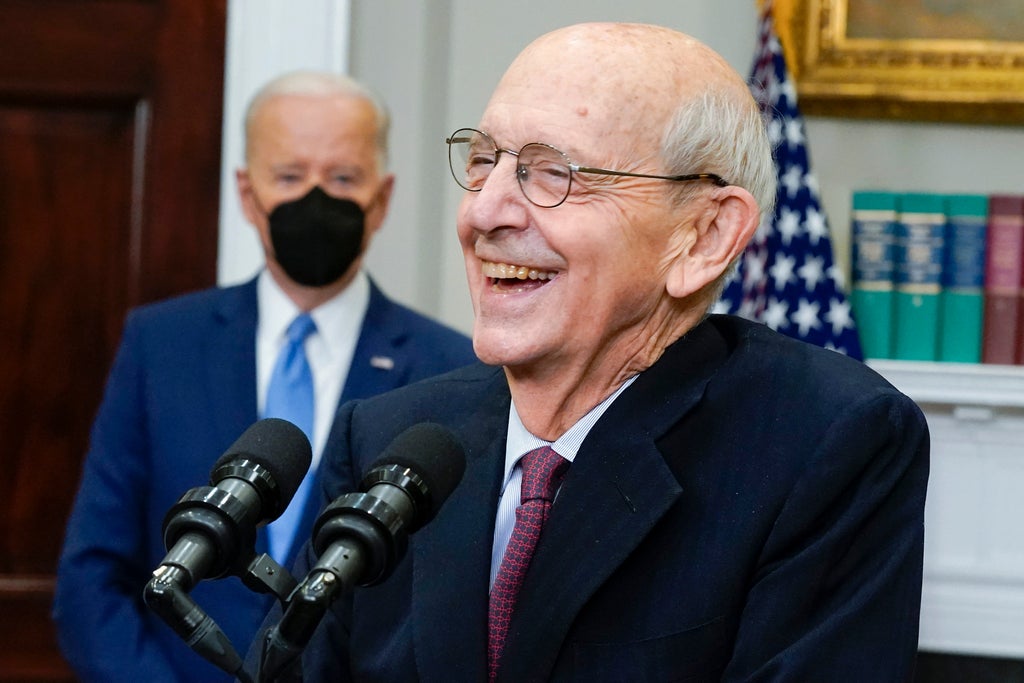 The court’s rapid rightward shift in recent years was a change for the liberal jurist, who early in his career sat with the same group of eight other justices for more than a decade. But Breyer, who announced his retirement Thursday, said repeatedly that the court should not be seen as political. Judges, I liked to say, are not “junior-league politicians.”

In recent years, as his more moderate colleagues were replaced by more conservative ones, Breyer seemed in public to maintain his good-humored nature. But there were occasional glimpses of frustration that he couldn’t get conservatives to see things from his point of view of him, and that the court was moving too quickly to the right.

Those frustrations surfaced in 2007. It was a year after the departure of Justice Sandra Day O’Connor, the court’s first female justice and a moderate who was replaced by the more conservative Justice Samuel Alito. Breyer had found himself on the losing end of a string of 5-4 rulings during the term. He was grim.

“It is not often in the law that so few have so quickly changed so much,” Breyer said while summarizing his dissent from a decision that invalidated public school integration plans.

In 2018, when she announced that she had been diagnosed with the beginning stages of dementia, she wrote in a tribute that the years they served together were “so happy for me.”

Breyer enjoyed a period of incredible stability his first decade on the court with no changes in the court’s makeup.

In that era, O’Connor was at the ideological center of the court and it was often her views that controlled the outcomes in close cases. But the conservative majority at the time also included Anthony Kennedy another moderate, along with Clarence Thomas, Antonin Scalia and Chief Justice William Rehnquist. Breyer’s more liberal colleagues were John Paul Stevens, David Souter and Ruth Bader Ginsburg, who like Breyer was nominated by President Bill Clinton

Jonathan Molot, a clerk for Breyer during his first year on the Supreme Court, said the court then may have been divided between five liberals and four conservatives, but there was still “a little more fluidity.”

It was a court where being “optimistic about human nature, being able to see the other side’s perspective, being able to communicate on good terms with everyone I think made a genuine difference,” he said. That was Breyer, he said, who was liked by his colleagues regardless of judicial philosophy.

The composition of the court began to change in 2005, however, when O’Connor announced her retirement. Soon after, Rehnquist died of cancer, leading to the confirmation of Chief Justice John Roberts Kennedy became the new ideological center of the court.

While Kennedy was more conservative than O’Connor, there were still times when he was willing to join his more liberal peers to form a majority. And even Roberts sometimes joined with the court’s four liberals, voting in 2012 to uphold President Barack Obama’s health care law, for example. Liberals also won major gay rights cases with votes from Kennedy, culminating in the 2015 case in which the court said gay couples had a right to marry nationwide.

But deaths and retirements over the past six years have transformed the court more fundamentally.

First came the unexpected death of Scalia in Texas in 2016. Replacing a conservative justice during Obama’s presidency might have been expected to make the court less conservative. But Republican senators held the seat open until after the 2016 presidential election. And instead of a Democrat selecting Scalia’s successor it was a Republican, Donald Trump, who chose conservative Neil Gorsuch.

Gorsuch’s confirmation didn’t change the balance of the court, but Kennedy’s retirement in 2018 did, when he was succeeded by the more conservative Brett Kavanaugh. The death of Breyer’s friend Ginsburg in 2020 was even more consequential. The liberal justice was replaced by Amy Coney Barrett, giving conservatives a 6-3 advantage on the court.

Already in recent months the court’s conservatives have let a restrictive Texas abortion law take effect and kept Biden from enforcing requirement that employees at large businesses get vaccinated against COVID-19 or test regularly or wear a mask on the job. Breyer opposed both outcomes. Before he leaves at the end of the term the court has also signaled it could overturn the nationwide right to abortion that has existed for nearly 50 years.

The American public has increasingly negative views of the court. In September, a Gallup poll found 54% said they had “a great deal” or “fair amount” of confidence in the Supreme Court, down from 67% in 2020. Only one other time in five decades has that confidence fallen below 60% .

In remarks Thursday at the White House, Breyer described America as a “complicated country” and an “experiment that’s still going on.” He said future generations would ”determine whether the experiment still works. And of course, I’m an optimist, and I’m pretty sure it will.”