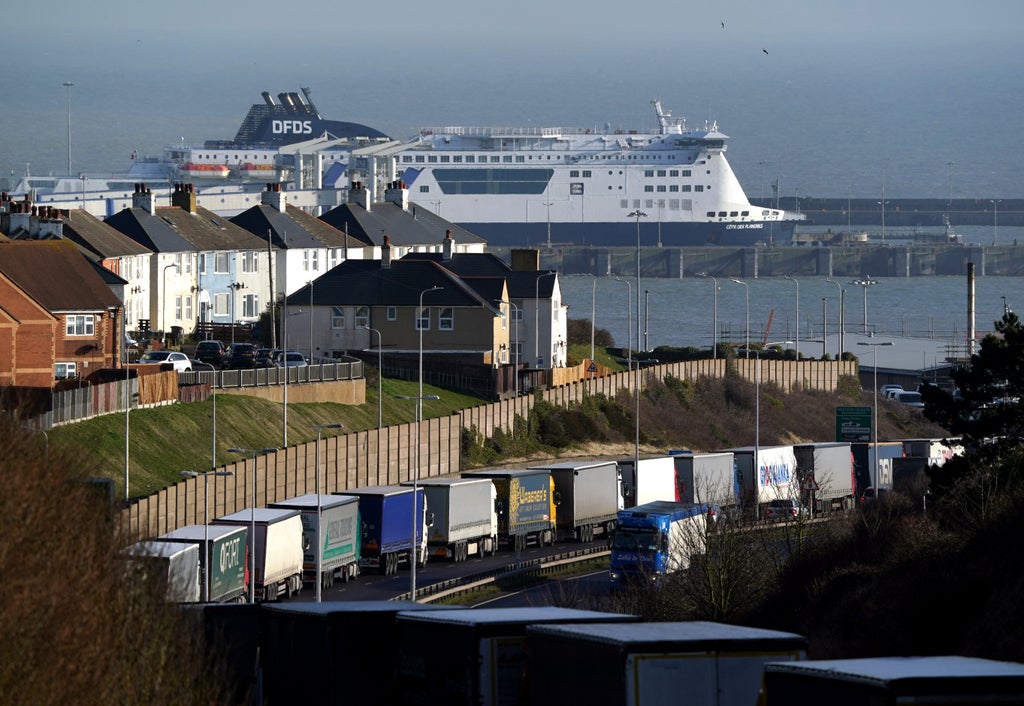 UK port operators have slammed the government for leaving them in the dark about crucial arrangements for new Brexit-related checks and red tape to be phased in this year.

The UK Major Ports Group, which represents 40 ports around the UK, said there was still no clear plan or estimate of charges for customs and food safety checks at new government-funded border posts.

The group’s members fear confusion will lead to yet more disruption to supply chains already under severe strain as lorries back up for thousands around the UK’s Channel ports.

Port operators are concerned they face a big hit to their revenues this year when new controls are phased in after being repeatedly postponed.

Despite months of pleading from the ports industry, ministers have yet to reveal how much they will charge for processing imports at border control posts, including a major facility at Sevington in Kent that will handle goods going through Dover and Folkestone.

Port companies fear the government checkpoints will undercut their rates for providing checks. Companies running ports outside the Channel ports believe the market could be distorted, handing Dover and Folkestone could an unfair advantage.

“We need to know what the government is going to charge because it may be less than port operators are currently charging which could then disrupt trade flows,” said Tim Morris, chief executive of the UK Major Ports Group.

“The industry still doesn’t know what percentage of goods are going to be checked.

“It’s a concern for everywhere that handles EU trade. These are very price-sensitive routes.”

There are also concerns that lorry loads of goods flagged for checks at the new inland facilities present a risk that shipments could evade customs.

“There are 25 miles between Dover and Sevington. If there’s any indication that a blind eye might be turned when lorries are pinged for customs checks but don’t show up that is a concern. That is clearly an issue for Portsmouth, Hull and others.”

Mark Simmonds, director of policy and external affairs at the British Ports Association, said he had been pushing for months for clarity on the costs of new checks. He also warned that the worst disruption would come in July when physical checks will begin on food and plants.

“The checks being introduced in July are much more intrusive and more time-consuming than customs checks, which are mostly about documentation,” he said.

A spokesperson for the Port of Dover rejected the suggestion that new arrangements would unfairly benefit Channel ports, and said the issue was “not a priority”.

Despite ministers’ claims that any border problems would be short-term, port operators are now being bombarded with requests from multiple government departments about border changes stretching out to 2025, indicating that years of upheaval lie ahead.

It comes after a damning report from the Public Accounts Committee which found that the “only detectable impact” of Brexit was more paperwork, higher costs and delays.

Mr Morris said that – two years after the UK left the EU – various government departments were only now launching calls for evidence and pilot schemes.

“Port operators are still working out how they are supposed to implement what’s been brought in on 1 January and what is going to happen on 1 July [when new checks on food begin],” he said.

“At the same time, we have four consultations about what may or may not happen in 2025.

The government has said it wants to have “the most competitive border in the world” by 2025 but has yet to establish how it will achieve the aim.

Mr Morris added understanding the government’s plans for 2025 onwards, let alone preparing for those arrangements, “is not helped by the current frenzy of ‘future borders’ initiatives across a number of government departments and agencies”.

In a report published this week, the Public Accounts Committee said it had “repeatedly” raised concerns about the impact of new trading arrangements and that it remained concerned, with disruption expected to worsen as the pandemic subsides.

The PAC said Brexit’s impact had been partially obscured because Covid-19 had led to a big decline in passenger numbers.

If cross-border passenger volumes recover as expected this year “there is potential for disruption at the border”, exacerbated by “further checks at ports as part of the EU’s new entry and exit system”, the committee said.

It warned problems would be particularly acute at ports like Dover where EU officials carry out border checks on the UK side. Dover has been beset by long queues of lorries backed up along roads leading up to the port.

Government accused of ‘spectating from sidelines’ amid rising food costs