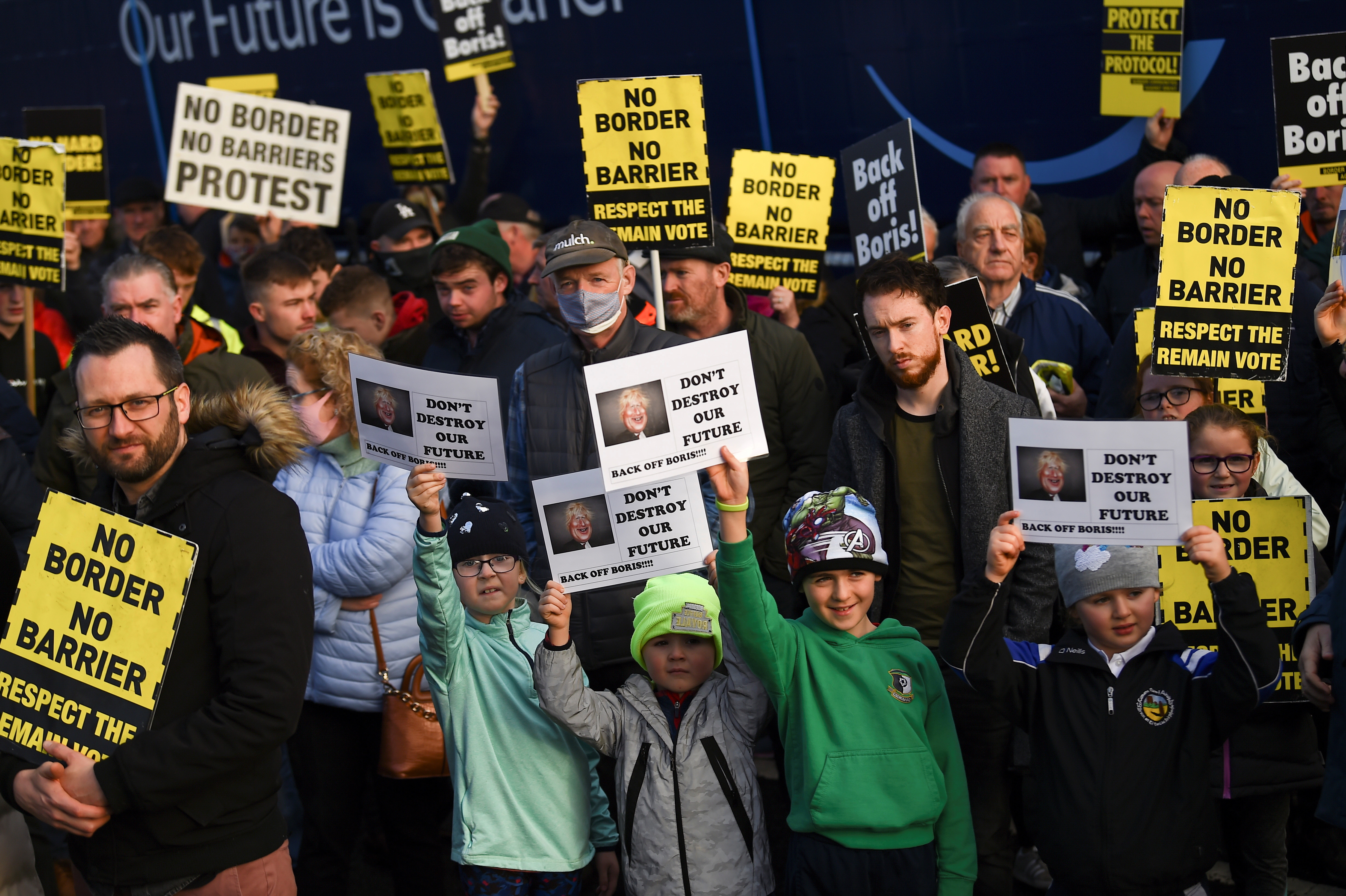 Patrick works behind the counter at the butcher shop Clooney Meats, in the Protestant area of ​​Londonderry (Derry, for Catholics), Northern Ireland. You couldn’t be more British, with your straw hat and striped apron, like all the UK butchers who pride themselves on their trade. The best one, without a doubt, to comment on the “sausage war” that has faced London and Brussels in recent months. The renegotiation of the Irish Protocol, which has once again soured the relationship between the two blocks.

-“War? What a war? If all our products are local ”, he wonders at the question.

– Hasn’t the protocol affected you at all?

– “That would rather be asked of those across the street, those of the Tesco supermarket,” he suggests.

The problems around protocol, which now threaten to unleash a trade war between London and Brussels, and to reawaken sectarian violence in the streets of Northern Ireland, actually began with very prosaic, almost irrelevant frictions. With Brexit, the Republic of Ireland became the only community border territory with the United Kingdom (Northern Ireland, to the northeast of the island, is British). The EU’s precious internal market had to be preserved without re-establishing a hard border in Ireland that would jeopardize the peace reached in the 1998 Good Friday Agreement.

Every day the citizens of the island cross an invisible border that avoids the memory of partition and feeds the pleasant fiction that they are all simply Irish. In exchange, the Irish Protocol, a document annexed to the EU Withdrawal Agreement – and with the same legal force as an international treaty – established that Northern Ireland would remain within the EU’s customs space and internal market. The new border, the new customs controls, would be set in the Irish Sea, the space of water that separates Ireland from Great Britain.

It was when large British supermarket chains, such as Tesco, discovered the cumbersome customs procedures they had to go through to ship products and fill the shelves of their stores in Northern Ireland, that the nerves and protests began. Or when the National Health Service (NHS) had difficulty shipping some generic drugs to its Northern Irish facility. “It is true that the Protocol presented some problems to the business community from the beginning, as the European Commission has recognized. Because [Bruselas] has presented very important flexibility proposals –to avoid unexpected problems or difficulties with products such as food or medicines–, while protecting the internal market of the EU ”, says Thomas Byrne, Irish Secretary of State for Affairs of the EU. “By the way, access to that internal market is very important for Northern Ireland,” he recalls.

See also  Support Ukraine through some of our favorite Edinburgh restaurants, cafes and food businesses

He was trying to explain all this this week to the Northern Irish unionist deputies with whom he met at the Dundalk Institute of Technology, a city close to the border – if one gets carried away by the map – or halfway between Dublin and Belfast – if you get infected with the mentality of the islanders. The Irish Executive skillfully intervened a little over a week ago to prevent negotiations between London and Brussels from going overboard. Boris Johnson’s government, driven more by ideology than pragmatism, despised the generous offer from Brussels, pulled out a new excuse and threatened to unilaterally suspend the Protocol, through a forced interpretation of its Article 16.

The excuse was now the Court of Justice of the EU (CJEU). According to Downing Street, an interference by a “foreign” court in British sovereignty. The Protocol makes it clear that the CJEU is in charge of supervising its application in Northern Ireland. “No business owner in Northern Ireland has ever raised this issue,” says Byrne. “Northern Ireland has access to the internal market, and the CJEU is an integral part of that internal market. But at no time has it been raised that the court may have any jurisdiction in purely Northern Irish matters. I trust that it will not become the stumbling block of the negotiations, because it would not be practical ”.

Practical or not, the Protocol has become the workhorse of Northern Irish unionist parties. They see the Irish Sea border as further distancing them from the UK, they believe London has betrayed them, they threaten to abandon the institutions of Self-Government if the treaty is not removed, and they use savage rhetoric that has contributed to its return to the streets, especially in Protestant areas, youth and sectarian vandalism.

In Shankill Road, the street that symbolizes like no other the current resignation of the Protestant population of Belfast, a special abandonment and poverty is perceived. Posters against the Protocol adorn its walls. The ACT Initiative office, the organization created to rehabilitate “ex-unionist fighters” into society after decades of sectarian violence, has also bought into the idea of ​​betrayal. “For people, the day-to-day problems on the street are much more important than what a document says that they are not going to read. It is much more relevant that the medicines do not arrive, that the products from the Mark & ​​Spencer stores have to undergo dozens of checks, or that the supermarket shelves are empty ”, explains Ian Shanks, the association’s project coordinator. “For many people, all of this is the last straw. His identity was already being usurped by Republican nationalists, who are increasingly pushing the idea of ​​unification. For those who voted in favor of Brexit, it was a very simple question: stay in the EU or leave. That this situation has lasted for more than five years, and continues to continue, only generates new frustration, more anger ”.

It is the rage that drives young people to burn containers or buses on Shankill Road (Belfast), or Waterside (Derry). “I neither despise nor want to be condescending with those responsible for this vandalism, but no one is going to convince me that these people have started burning buses after carefully analyzing the articles of the protocol and detecting specific constitutional problems”, jokes John Finucane, autonomous deputy of Sinn Féin in the constituency of North Belfast. This party has an increasing chance of being the most voted in the two Ireland. It has been a demographic question – there are more and more Catholics than Protestants. Also temporary: almost a quarter of a century of peace has erased from the memory of a new generation that Sinn Féin was the political arm of the terrorist organization IRA. And strategy: the formation opposed Brexit but embraced the advantages offered by the Protocol. “I think there are underlying issues that have to do with economic and social deprivation, and that the protocol is being used in a very cynical way to fuel tension,” says Finucane.

Paul Dawney, one of the coordinators of the Our Space youth center in Derry, has no doubt about it. He believes that it is the Protestant paramilitary organizations, which still survive, that are prodding young people to burn the streets. “It’s the usual, they can’t stand the past getting out of hand, and any excuse is good to get it back,” he says.

London and Brussels have given each other another opportunity to try to negotiate a practical solution. The Johnson government has lowered its rhetoric and the EU has, for the moment, parked the threat of a trade war that no one benefited. In the coming weeks – there is a consensus that Christmas is the deadline – it will be seen if pragmatism reigns, or if Brexit fanaticism will once again shake the always unstable Northern Ireland.