Skip to content
Home News BREAKING: Young man who died after stabbing in Ancoats named as second arrest made


A man who was killed after a double stabbing in Ancoats has been named as 24-year-old Neri Morse. A second arrest has also been made in the investigation.

Police launched a murder investigation on Wednesday (20 April) after the man was found fatally injured. Emergency services rushed to the scene on Pollard Street at the junction with Carruthers Street, near Manchester city centre, after reports that two men had been knifed shortly after 6.30pm.

A man in his 20s – who has now been named as Neri Morse – was sadly pronounced dead at the scene. Another man, also in his 20s was taken to hospital with a stab wound to his leg.

Dozens of floral tributes have been left at the scene of the tragedy, with tea lights spelling out the name ‘Neri.’ One card placed on the pavement nearby reads: “To a deeply loved son, so sorry for your loss, rest in peace.” Another says: “May you rest in peace now and for eternity. Such a sad young loss.”

A friend of Neri, who asked not be named, told the MEN: “He was such a joyful boy, a loud soul with a large mouth who just lived for living. He was such a creative, fun and loving character. To know he’s never coming back is so sad.”

Members of the local community have also come out to pay their respects, with one woman laying floral tributes next to the blue police tape on Thursday (April 21). Others stopped by for a minute or so to reflect on the tragedy.

One woman, who lives several yards away from the scene, told the MEN: “We didn’t see anything happen. We just saw an ambulance and a white car at about 7pm. Then an hour later there was a white tent. We only moved here a week ago but I thought it felt pretty safe around here.”

Another resident said: “We just heard the police helicopter but assumed it was something to do with the Manchester City game so didn’t think anything of it. It’s pretty quiet around here usually. There’s not been anything like a stabbing around here in a longtime.”

Carruthers Street was taped off by police on Wednesday night and for much of the day on Thursday as detectives carried out their investigations. A white screen and blue tent could be seen inside the scene which was being guarded by police officers. Two forensic officers could also be seen carrying out investigations inside the cordon.

Detective Chief Inspector Wes Knights, of GMP’s Major Incident Team, said: “Our thoughts are with Neri’s loved ones at this heart-breaking time. As our investigation continues, specially trained colleagues are supporting them. “Since Wednesday night, we have built a detailed picture of the events leading up to this incident and, though we have two males in custody, inquiries are ongoing to ensure those involved are brought to face justice. 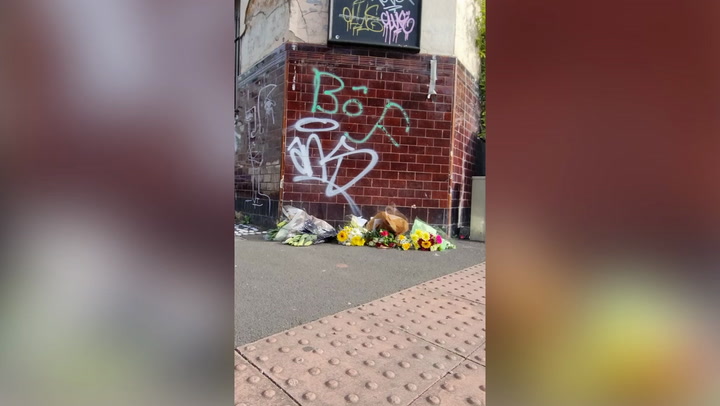 “I would like to use this opportunity to thank members of the public who’ve already shared information with us. We have now activated the Major Incident Public Portal: https://mipp.police.uk/operation/06GMP22A50-PO1 and I encourage anyone who knows something which might assist us to contact us or Crimestoppers without hesitation.”

DCI Knights said in an earlier statement: “We can now reassure members of the public that we do not believe there is any threat to the wider community, that being said, extra officers will remain in the area in the coming days. As always, I would like to use this opportunity to appeal to anyone with information, particularly dash cam footage from Ancoats between 6.15pm and 6.35pm last night, to share it with us – this can also be done anonymously via Crimestoppers.”

Anyone with information should contact police via the Major Incident Public Portal or 0161 856 5413 quoting Operation Southsea. Information can also be shared anonymously via the independent charity – Crimestoppers on 0800 555 111.