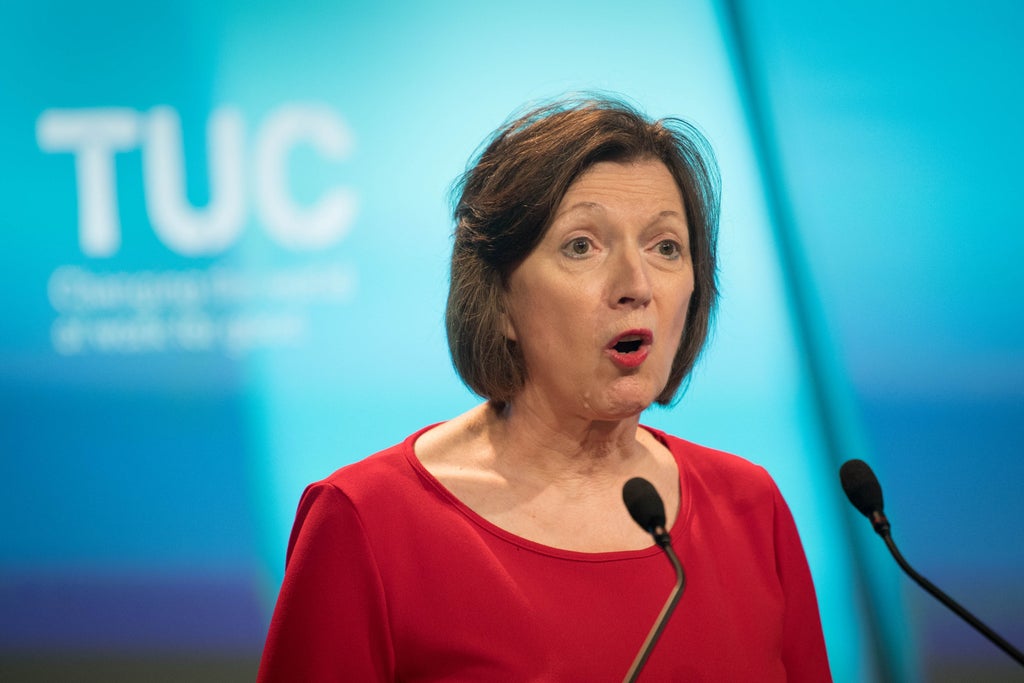 Scrapping free Covid tests will be “madness” and disproportionately hit frontline workers in the midst of a cost-of-living crisis, Boris Johnson has been warned by the Trade Union Congress leader.

Frances O’Grady, the general secretary of the TUC, told The Independent the prime minister must not “gamble” on public safety, as he prepares to publish a strategy for ending England’s legal restrictions.

She also stressed that ministers must improve the UK’s “pitiful” sick pay – currently amongst the lowest rates in Europe – and said it would be an “unnecessary risk” to end self-isolation payments.

The intervention from the TUC chief comes ahead of Monday’s publication of the government’s “living with Covid” blueprint.

Mr Johnson is expected to reveal his final decision on whether to end all domestic legal restrictions, including the legal requirement to self-isolate after a positive test.

There is also speculation the government will set out plans to end the provision of free lateral flow tests for asymptotic individuals and scrap self-isolation payments for people on low incomes in order to save the Treasury billions of pounds.

“I think the key point here from my perspective is that if they are going to lift restrictions they can’t gamble on people’s safety,” Ms O’Grady said. “It can’t be a license to rip up, or cut corners in terms of people’s safety and public health.”

Insisting she was “worried” over reports the government will announce plans to end free Covid tests, she said: “The very people who most need those tests are frontline workers, who are very often amongst the lowest paid.”

See also  iPad Pro 2020 review: Deeply upgraded new tablet is closer than ever to a full laptop experience | The Independent

Describing it as a “false economy”, Ms O’Grady said in an interview with The Independent: “I really hope the government does not move to scrap free tests because I don’t know who else in the middle of a cost-of-living crisis is expected to pick up the bill.

“Who can afford it? Again, it’s unnecessary gambling. It would be madness to do so in my view. It’s so much better to be safe than sorry.

“It will cost us dear in the long-term if we don’t get this transition right. Nobody wants care workers going into care homes who are unable to afford testing. I don’t want any worker to be in that position”.

Her call comes after a survey by the NHS Federation of more than 300 senior staff in England found 79 per cent strongly disagreed with any plans to stop free access of Covid tests for the public. A further 94 per cent said testing for health staff and other key workers must all continue.

Earlier this week, Sir Keir Starmer, the Labor leader, also said it would be a “mistake” to end the free provision of lateral flow and PCR tests while papers released by a sub-group informing the Scientific Advisor Group for Emergencies (Sage) on Friday suggested that Covid cases could rise “rapidly” if there is a sudden end to testing and isolation rules.

In a stark finding, the experts added that transmission could rise by between 25 and 80 per cent if people “return to pre-pandemic behaviors and no mitigations”.

The TUC boss, who worked alongside the chancellor, Rishi Sunak, during the initial days of the pandemic to devise the furlough scheme, also stressed it would be an “unnecessary risk” for ministers to scrap self-isolation payments next week without first “fixing ” the UK’s statutory sick pay system.

Under the scheme — introduced in September 2020 — individuals on low incomes who have been told to self-isolate after a positive Covid test, are eligible for a £500 payment after applying through their local authority.

Ms O’Grady, however, described it as a “failed system”, saying many workers were unaware of its existence due to a lack of promotion.

“Instead of messing about with self-isolation payments, which have been proven not to reach those who need them the most, why not sort out our sick pay system?” she added, citing the TUC’s demands for the £96 per week statutory sick pay to increased to the levels of a real living wage.

As the government prepares to unveil its strategy the TUC chief also raised concerns that provisions in the Coronavirus Act — providing sick pay from day one, rather than day four — could be repealed.

With families across the country face a sharp hike in the cost of living, she said: “If they were to remove that day one provision that would be catastrophic for a lot of family budgets. What are you supposed to do in the meantime?

Mr Johnson’s surprise announcement last week of his intention to lift remaining restrictions — a month earlier than planned — comes at a turbulent moment for the prime minister, with deep unease over his leadership among Conservative MPs amid the police investigation into allegations of parties held in No 10.

“The worry, obviously, is that currently Boris Johnson is more concerned about what his backbenchers think than he is about what’s best for public health,” Ms O’Grady added.