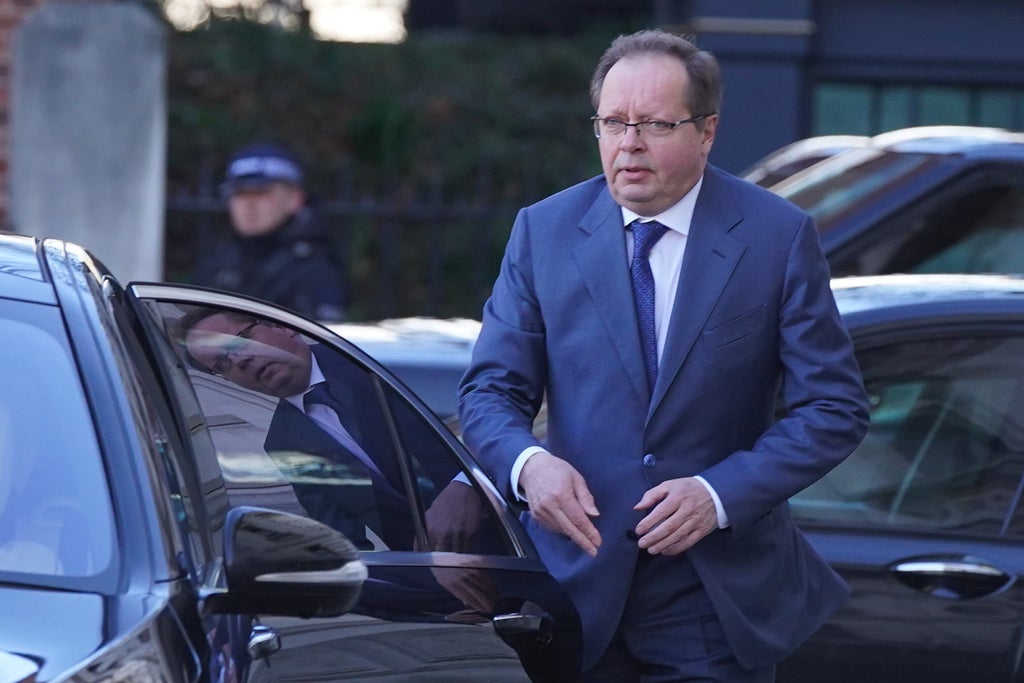 Boris Johnson is brought by opposition parties at Westminster and a senior Tory MP to expel Russia’s ambassador to the UK over the Kremlin’s bloody invasion of Ukraine.

As Vladimir Putin’s military offensive entered its third day, Ukraine’s foreign minister called on allies to “fully isolate” Moscow through a raft of measures – including the expulsion of ambassadors.

Dymtro Kuleba, who posted an image of a residential block damaged by missile fire, said: “Kyiv, our splendid, peaceful city, survived another night under attacks by Russian ground forces, missiles.”

“One of them has hit a residential apartment in Kyiv,” he added. “I demand the world: fully isolate Russia, expel ambassadors, oil embargo, ruin its economy. Stop Russian war criminals!

“The Russian ambassador is parroting the lies of Putin’s rogue regime, which is waging an illegal war against Ukraine,” he said. “The government should now expel Andrei Kelin from the UK.”

The senior Conservative MP Tobias Ellwood, who chairs the Commons defense committee, also replied “100 per cent” when asked by The Independent whether the ambassador should be expelled.

“All Nato countries could do this with immediacy,” he said. “We’ve just seen a completely illegal invasion of a sovereign state in Europe.”

He added: “I think there needs to be a series of measures of which this should just be one that continues to the non-lethal pressure on Russia, to isolate Putin from the international community. We need to make it harder, not easier, for Russia to operate outside of its state.”

While insisting “backchannels” for ministers should be retained, Mr Ellwood also suggested: “I would like to see GRU, FSB [intelligence] officers in embassies dismissed as well. We know who these people are. We did it with affect after the the novichok poisoning.”

The SNP’s Westminster leader Ian Blackford backed the call, posting on social media: “Russia needs to face the full force of sanctions whilst we must do all we can to supply Ukraine what they need to defend themselves.

“With Russia now targeting hospitals and civilians we need to step up. Boris Johnson should now expel Andrey Kelin the Russian ambassador to the UK”.

Earlier this week, Liz Truss, the foreign secretary, told Moscow’s top diplomat in London Mr Kelin he should be “ashamed of himself” over the “illegal, unprovoked” invasion of Ukraine.

During the heated meeting on Thursday, Ms Truss also told the ambassador the Kremlin had “repeatedly lied about having no plans to invade” — before kicking him out of the Foreign Office.

After the meeting, a Foreign Office spokesperson said: “She reiterated there would be severe sanctions in retribution for the invasion, which will inflict pain on the Russian economy and those closely associated with the Kremlin.”

“She added that Russia should expect a long, protracted conflict that would inflict a huge human, economic and political cost on the Russian government. She said allies and partners are united in support for Ukraine, providing economic and defensive support.”