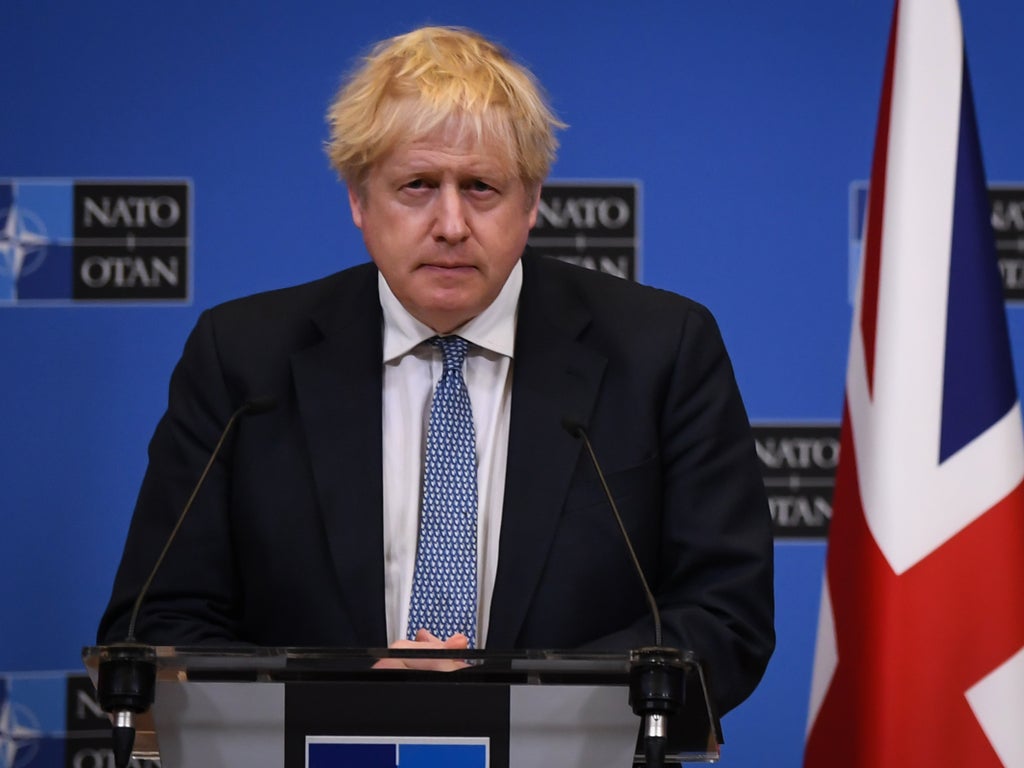 Boris Johnson has refused to say whether he will resign if he is fined by police for breaking lockdown restrictions, as Partygate dogged his appearance at a Nato press conference on the Ukraine crisis.

The prime minister was speaking alongside Nato secretary-general Jens Stoltenberg in Brussels, but continued to be asked about the Metropolitan Police probe into Downing Street parties.

Asked by the BBC’s Laura Kuenssberg if he would quit if found to have broken the law, the PM said: “On what’s going on at home – that process must be completed.”

He added: “I’m looking forward to it being completed. That’s the time to say more about that.”

Asked again if he would consider stepping down if fined, Mr Johnson said: “We’re going to wait for that process to be completed.”

According to reports, Mr Johnson will not resign even if he received a fine fixed penalty for any breach of lockdown rules at the end of the Scotland Yard investigation.

But some Tory MPs have suggested such an outcome would be the end for the prime minister. Asked on ITV’s Peston if the PM would have to go if fine, Treasury minister Simon Clarke refused to say.

“The prime minister has been very clear that if there is any action taken against him by the police, then he will make it public,” said Mr Clarke. “I’m not going to get drawn into hypotheticals on what he would need to do.”

The PM is under more pressure after the Metropolitan Police said inquiries would be widened to cover a No 10 quiz night, after a photo emerged of Mr Johnson and colleagues near a bottle of bubbly.

See also  Mysie: 'You dream about the future of a relationship – it's easy to forget the reality'

Defense secretary Ben Wallace suggested that Mr Johnson’s enemies are plotting to bring him down with a “constant” leak of Downing Street party photos.

“The constant leaking is clearly designed for a purpose,” Mr Wallace told Times Radio, suggesting some were conspiring against Mr Johnson by sharing photos.

He said: “Yes, there could be a photograph tomorrow, the next day or the day after – that’s clearly what’s behind some of the people’s motives.”

Attorney general Suella Bravermantold MPs the law officers’ convention prevented her from commenting on the “fact or content” of any legal advice provided to members of the government.

It comes as former Tory prime minister Sir John Major launched an astonishing attack on Mr Johnson over the saga – saying it is clear he broke Covid rules at No 10 parties.

Sir John condemned the “unbelievable” excuses used to deny that rules were flouted, arguing that “deliberate lies to parliament have been fatal to political careers – and must always be so”.

Meanwhile, Mr Johnson did not rule out going further in giving Ukraine military support in the event of an invasion by Russia. He said: “We will consider what more we can conceivably offer.”

The prime minister warned that the next few days were “probably the most dangerous moment … in what is the biggest security crisis Europe has faced for decades”.

Asked if a Russian invasion was inevitable, Mr Johnson replied: “I honestly don’t think a decision has yet been made, but that doesn’t mean it is impossible that something absolutely disastrous could happen very soon indeed. Our intelligence…remains grim.”