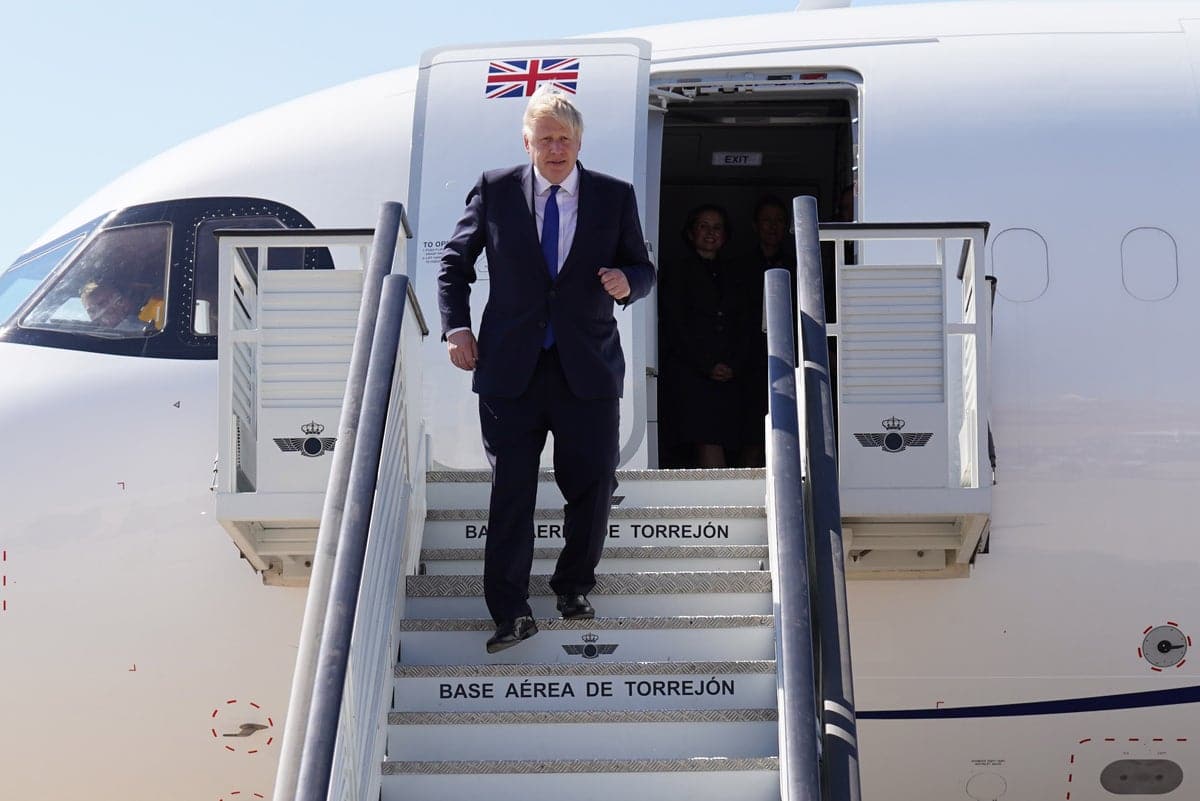 A bid by Tories to block a Labor MP from charing an investigation into whether or not Boris Johnson misled parliament over Partygate has failed.

Harriet Harman has been confirmed as the lead on a Commmons probe into Covid lawbreaking parties in Downing Street during lockdown.

The prime minister will not face the committee until the autumn, it was revealed as the inquiry was formally launched on Wednesday afternoon.

Earlier, Dominic Raab ruled out enshrining women’s right to abortion in law, as he stood in for Boris Johnson at prime minister’s questions.

Mr Raab, the deputy PM and justice minister, said the legality of abortion in the UK was settled, when he was asked to support an amendment on the issue to his proposed Bill of Rights.

He was filling in for the prime minister, who is at the Nato summit in Madrid.

Images capture Queen Elizabeth II receiving first minister Nicola Sturgeon during an audience at the Palace of Holyroodhouse in Edinburgh, as part of her traditional trip to Scotland for Holyrood Week.

Britain’s policing minister has claimed that Sadiq Khan should “share responsibility” for the Metropolitan Police’s slide into special measures.

Kit Malthouse suggested that, as police and crime commissioner (PCC) for the force, the mayor of London should “consider his position”.

But four of the six police forces currently in special measures have Conservative PCCs.

Boris Johnson has described the invitation granted to two Nordic countries to join Nato a “great step forward” for the military alliance, No 10 says.

“He described their accession as a great step forward for Nato and welcomed the progress made since his visits to Sweden and Finland last month.

“The prime minister said that the membership of two more pro-peace democracies will permanently strengthen our defensive alliance, helping to keep us all safe.

“The prime minister updated on his recent visit to Kyiv. The leaders discussed the need to oppose Russian threats and intimidation in all its guises.

“That includes by ensuring that the people of Ukraine have the tools they need to turn the tide in Putin’s futile war of aggression – they agreed that (Vladimir) Putin is offering Ukraine no other option.”

No 10 staff have been told they will be able to submit evidence anonymously to the committee investigating whether Boris Johnson lied to the Commons over Partygate.

Subject to Privileges Committee chair Harriet Harman being able to identify the individuals in discussions with committee staff, the panel determined it would be willing to take written or oral evidence from people who wish to remain anonymous.

The MPs gave until 29 July for witnesses and evidence to come forward, saying it can be submitted to the committee website.

Labor grandee Harriet Harman has been selected to lead the Commons investigation into whether Boris Johnson lied to parliament over Partygate.

The privileges committee issued a call for witnesses to come forward with evidence of the prime minister’s knowledge of rule-breaking gatherings in No 10.

Ms Harman, a former acting leader of the Labor Party, was unanimously elected to chair the committee, which will be advised by Sir Ernest Ryder, a former lord justice of appeal.

Our politics editor Andrew Woodcock will have more on this story as it comes in:

A full 16 per cent of the British public still believe Brexit is going well, a new poll has been found.

A new survey by pollsters YouGov found a significant majority of people, 54 per cent, think Britain’s EU exit is going badly, with 20 per cent saying neither.

More than half of voters support Brexit’s NI protocol

A majority of voters in Northern Ireland support the Brexit protocol, according to a new poll.

Some 55 per cent said they viewed the new trading arrangements as appropriate for managing the impact of being outside of the EU.

Meanwhile, some 53 per cent said, overall the trading arrangements are a “good thing for Northern Ireland.

38 per cent and 37 per cent of respondents respectively are of the opposite view, according to the survey by Lucid Talk and Queens University Belfast.

The prime minster has ruled out a British boycott from the forthcoming G20 summit, indicating that he would go even if Russian president Vladimir Putin chose to turn up.

The prospect of an extraordinary showdown between western leaders and the Russian president was raised after the Kremlin said Mr Putin would go to November’s conference in Indonesia.

Boris Johnson says he is keen to forge a loose political alliance of European and North African leaders – comparing it to the Roman Empire in its pomp.

French president Emmanuel Macron raised the idea of ​​a new “European political community” with the prime minister when the pair met at the G7 summit in Germany.

It’s no wonder the PM has fled the country, claims Rayner

Angela Rayner said it was no wonder Boris Johnson had fled the country after Labour’s victory in Wakefield, as she clashed with Dominic Raab over strikes, taxation and the prime minister’s job.

She said she would “revel in the opportunity” to have more than just by-elections, adding: “Call a general election and see where the people are.”

She added: “This is the man who once said a high level of Government taxation was hurting UK competitiveness. Now he is backing the Prime Minister who wants to put taxes up 15 times. At this rate, working people will be paying £500 billion more in tax by 2030.

“How high does he think the burden on working people should get before he says enough is enough?”

Dominic Raab replied the Government were “the ones helping working people with a tax cut of £330”, and listed a series of other measures the Government has taken to help with the rising cost of living.

He added: “We are the ones with a plan for low unemployment, a high-wage, high-skill economy, and Labor – it is back to year zero.”