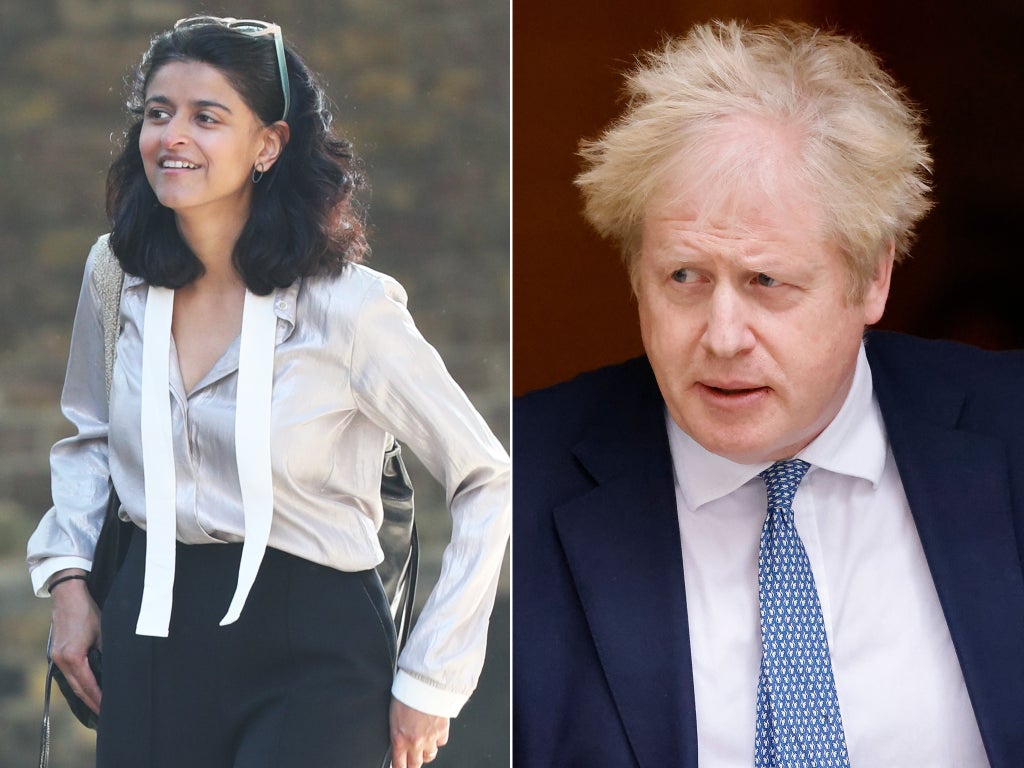 Boris Johnson ‘toxic’ even to his allies, says Malcom Rifkind

Four key members of Boris Johnson’s team resigning on Thursday was the result of the prime minister “taking charge” in the wake of Partygate, a minister has claimed.

Energy minister Greg Hands said on Friday: “The prime minister was absolutely clear on Monday that there would be changes at the top of No 10 and that is what he has delivered.”

Mr Johnson’s director of policy Munira Mirza was the first one to quit yesterday, telling her boss his Jimmy Savile smear against Sir Keir Starmer was “inappropriate and partisan”.

It has been reported that her shock resignation sparked a clear out of No 10 as Boris Johnson tried to take back control of events.

Rishi Sunak, the chancellor, has been tipped as Mr Johnson’s most likely successor if he is forced from office.

Full report: Boris Johnson suffers another resignation from No 10 team

Our corresponding politics Ashley Cowburn has more details on the resignation of No 10 aide Elena Narozanski:

Fifth aide leaves as No 10 as exodus continues

Another aid to Boris Johnson has quit her job as the exodus from No 10 Downing Street continues.

Policy unit member Elena Narozanski is the fifth government official to walk out in the space of 24 hours, Conservative Home reports.

See also  Border agency chief faces challenges from within and outside

The Conservatives have held on to the seat of Southend West following a by-election triggered by the killing of Sir David Amess.

In a contest that Labor and the Liberal Democrats along with other mainstream political parties, chose not to contest, Tory candidate Anna Firth ran out as a comfortable winner with 86% of the vote.

The remarks — echoed by some Tory MPs loyal to the prime minister on social media — follow an evening of turmoil at the top of government, with the departure of No 10’s director and of communications, and head of policy.

Tory MP: PM needs to ‘ship up or shape out’

In a slightly mixed up warning to the PM, Mr Merriman said: “We all know that if the prime minister doesn’t ship up, then they have to shape out [sic], and that’s exactly what happened when this prime minister took over.”

He added that he was “deeply troubled by what’s going on.”

Speaking on Sky news, Mr Hands said Boris Johnson was making changes to his top team in the way of Sue Gray’s report on Partygate.

“The Prime Minister was absolutely clear on Monday that there would be changes at the top of No 10 and that is what he has delivered.

“The Sue Gray report update said that there were failing at the top of the operation. This is the Prime Minister taking charge.

“This is a wider issue than just the Sue Gray report. This is about saying we need changes at No 10, which is what the Prime Minister said on Monday.”

Tory whips are preparing for ministerial resignations, The Daily Telegraph you have reported.

The paper reports that Alex Chalk, the Solicitor General, could be someone who could quit soon because of unhappiness over how Partygate was handled.

Boris Johnson and Priti Patel have been criticized by the statistics watchdog for “misleading” claims that crime has failed under their leadership.

The prime minister claimed in the House of Commons last week that the government had “been cutting crime by 14 percent.”

Pen Farthing’s dog scandal: What you need to know

Boris Johnson ringed in the new year with a rocky start and trouble seems to be increasing for the prime minister after four top No 10 officials resigned on Thursday.

Political commentators, however, have also pegged the Pen Farthing animal evacuation as a political controversy that could have marked the beginning of the end of Mr Johnson’s time at Downing Street.

The PM has been accused of lying to the public after new evidence emerged suggesting he personally authorized the controversial evacuation of 173 dogs and cats from Afghanistan.

Mr Johnson had previously said on 7 December last year that it was “complete nonsense” that he had intervened to have the animals evacuated and that he had “no influence on that particular case”. “Nor would that be right,” he added.

The Independent‘s associate editor Sean O’Grady writes how an attack carries a lot more weight when delivered by a long-time ally, referring to Munira Mirza’s resignation and cited the example of when Geoffrey Howe turned on Margaret Thatcher in 1990.

After about 15 years of association with the old monster, on and off, through City Hall to Downing Street, she’s [Munira Mirza] finally had enough. The Jimmy Savile smear on Keir Starmer was too much for her.

It’s difficult to believe that after all she’s put up with, all the stuff about letter boxes, picanninies, bum boys in tank tops, that this admittedly exceptionally offensive quip was the one thing that she found so inhuman she had to leave the building. It’s more, perhaps, a case of this being the straw that finally broke the camel’s back. Anyway, she’s out.