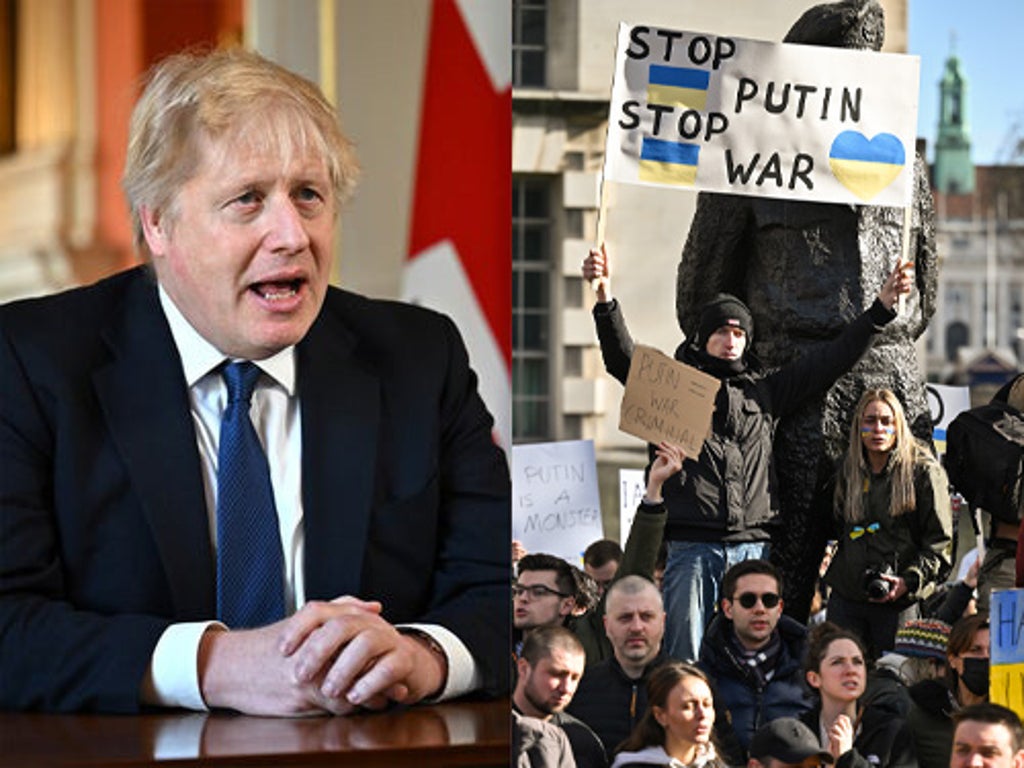 Prime minister Boris Johnson has applauded Ukrainians for “fighting heroically” as the US, Canada and the European Union backed the UK’s bid to eject Russia from the major international payment network, Swift.

“It is incredibly important for tightening the economic ligature around the Putin regime,” the PM told broadcasters.

“Let’s be in no doubt, things are not going all the way of president Putin, very far from it.

“The Ukrainians are fighting heroically, and in some places with great success, as many of us thought they would because they’re a great country and a very brave country.”

Meanwhile, the foreign office is drawing up a “hit list” of Russian oligarchs it will hit with sanctions every few weeks, Liz Truss has said.

In an interview withThe Sunday Timesthe foreign secretary said the government would “make it deeply painful” for the hundreds of oligarchs living in the UK “that support the Putin regime.”

“Nothing is off the table in terms of who or what we are targeting. We are very clear about that – we are very prepared to do what it takes.”

Police said they were investigating after protester threw paint at embassy

Germany has announced it will provide anti-tank weapons to Ukraine, a major shift in policy for Berlin.

The German economy and climate ministry said in a Saturday evening statement that Germany is allowing the Netherlands to ship 400 German-made anti-tank weapons to Ukraine.

“The Russian invasion of Ukraine marks a turning point. It threatens our entire post-war order,” said German Chancellor Olaf Scholz. “In this situation, it is our duty to do our best to help Ukraine defend itself against Vladimir Putin’s invading army.”

Germany had long stuck to a policy of not exporting deadly weapons to conflict zones, including Ukraine. As recently as Friday, government officials said they would abide by that policy.

It is thought Germany will supply 1,000 anti-tank weapons and 500 stinger missiles.

Pressure is growing on the Irish Government to expel the Russian ambassador, as protests continued in Dublin against the invasion of Ukraine.

On Saturday afternoon, dozens of protesters once again gathered outside the Russian Embassy in south Dublin to call on Russia to end the attacks on Ukraine.

It comes amid growing calls for the Russian Ambassador to be expelled from Ireland.

Patel clashes with Labor over visas for people fleeing Ukraine

A furious war of words has erupted between the government and Labor over Britain’s treatment of people fleeing the fighting in Ukraine.

Labor said the government’s refusal to relax visa restrictions for those seeking sanctuary in the UK was “immoral” at a time when the country was under fire.

But Home Secretary Priti Patel hit back, accusing the opposition of “appalling misinformation” and saying the claims were “simply untrue”.

Speaking during a visit to Birmingham, Labor leader Sir Keir Starmer urged ministers to adopt a “humanitarian approach” to people “fleeing for their lives”.

There was a contest affecting both ends of the Premier League table at Goodison Park on Saturday evening; dimmed by the seriously more significant fear, hurt and helplessness affecting Everton’s Vitaliy Mykolenko and Oleksandr Zinchenko of Manchester City.

The Ukrainian pair, who engaged in a pre-match embrace, were understandably enveloped in emotion as Goodison Park supplied a strong, moving show of support to their country – victims of a war materializing from Vladimir Putin’s poisonous megalomania.

In scenes soundtracked by ‘He Ain’t Heavy, He’s My Brother,’ Mykolenko was fighting back tears as Zinchenko succumbed to them.

Everton’s players had entered the pitch draped in Ukraine flags, while City had the horizontal bicolour of blue and yellow painting their jackets above a ‘No War’ cry.

‘Inconceivable’ that sporting relations can continue with Russia, says Johnson

Boris Johnson said it is “inconceivable” that sporting relations can continue with Russia under Vladimir Putin.

Asked if the UK should break off sporting connections with Russia following Poland and Sweden’s refusal to play the national football team in the World Cup play-offs, Mr Johnson called the situation “sad”.

“I mean, it’s a sad thing because I don’t think we’ve had a situation like this for a very, very long time,” the Prime Minister said.

“But it’s inconceivable to me to imagine that normal sporting relations with Putin’s Russia can continue.”

Boris Johnson said President Putin’s engagement in diplomacy was a “charade” and that he has a “weird, semi-mystical view of Ukraine as part of Russia”.

Speaking on Saturday night, the prime minister said: “I think we have to face the hideous reality that the diplomacy, as far as President Putin was concerned, was a charade.

“He never really intended to alter his course. You read the article that he wrote many months ago – it was clear that he’s attached to a weird, semi-mystical view of Ukraine as part of Russia.

“And that is a view that the Ukrainian people fervently, passionately reject and they’re showing that they will fight to reject it.

“Our job now is to help them, to help change the very heavy odds they face and that’s why we’re sending the support their way.”

Speaking at RAF Brize Norton, Boris Johnson said: “Let’s be in no doubt, things are not going all the way of President Putin, very far from it.

“The Ukrainians are fighting heroically, and in some places with great success, as many of us thought they would because they’re a great country and a very brave country.

“But as you rightly point out, there are some terrible atrocities being committed and there will be some very grim days ahead for Ukraine.

“We’ve got to do everything we can to change the heavy odds that Ukraine faces and to help them, and so that’s why we’re sending humanitarian supplies, we’re sending financial supplies and military supplies as well.

The Queen has postponed a diplomatic reception at Windsor that was due to be held on Wednesday.

Buckingham Palace said Her Majesty had accepted the foreign secretary’s advice to delay the event, which would have seen her meet hundreds of members of the Diplomatic Corps.

It is understood the postponement is because of the conflict in Ukraine.

Downing Street said Boris Johnson and Volodymyr Zelensky “agreed on the need for the international community to isolate Russia completely diplomatically and financially” in their call today.

In a statement, No 10 said: “The prime minister spoke to Ukrainian President Zelenskyy this evening.

“He paid tribute to the incredible heroism and bravery of President Zelenskyy and the Ukrainian people.

“The leaders agreed that President Putin is being met with a greater Ukrainian resistance than he calculated on.

“The prime minister updated on the UK’s support to Ukraine and the progress rallying international partners to hold Russia to account for their campaign of destruction.

“The leaders agreed on the need for the international community to isolate Russia completely diplomatically and financially. They welcomed the increased willingness to take action on excluding Russia from SWIFT.

“The prime minister and President Zelenskyy expressed their mutual concern about the role Belarus is playing as a conduct for President Putin’s violence. ”