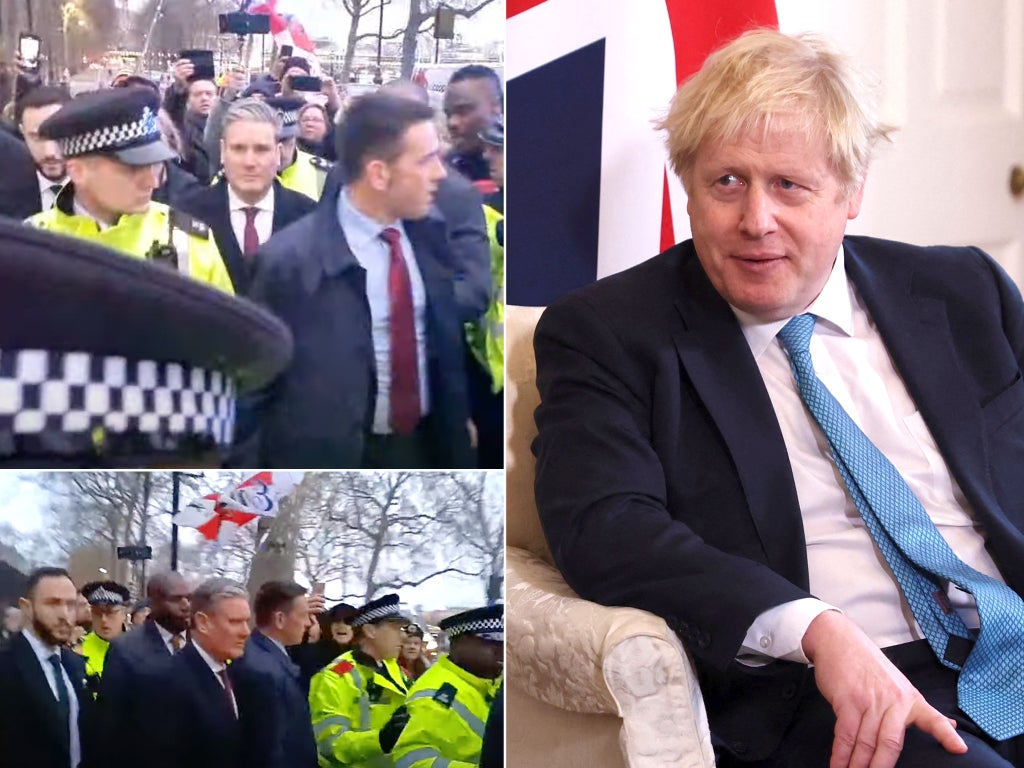 Leveling up secretary Michael Gove has urged people to “move on” from the row over false claims Boris Johnson made about Sir Keir Starmer’s failure to prosecute peadophile Jimmy Savile.

It comes a day after Sir Keir was rescued by police after a crowd of mobsters heckled him outside parliament, including slurs about Savile and the Labor leader being a “traitor”. Asked about the situation on Tuesday, Mr Gove described it as a “uniquely sensitive issue” but said only “the sooner we move on the better.”

Earlier, Commons speaker Sir Lindsay Hoyle intervened to warn Mr Johnson that his “words have consequences”, branding the remarks “inappropriate”. Senior Conservative MPs have also asked the PM to apologise, but Downing Street insisted earlier this would not happen.

Nicola Sturgeon, Scotland’s first minister, today described the abuse Sir Keir suffered as “sickening”, claiming it “is a reflection of the toxic cocktail of conspiracy theories, smears and lies that swirl around our politics now”. She added the PM had “weaponised” such issues and urged him to “fully, unreservedly and unequivocally apologise”.

PM’s reshuffle ‘will improve links between No 10 and parliament,’ says spox

Back on Boris Johnson’s mini reshuffle, Downing Street says the moves are designed to improve links between No 10 and parliament.

In a statement, the PM’s official spokesman said it is “important that we make immediate changes to improve both how the No 10 operation works and the work of the Cabinet Office”.

“We have changes to the whips’ office, improving engagement with MPs and helping to drive the Government’s ambitious agenda.

“We have a new Brexit opportunities minister, a role that’s been created to drive forward the changes we are able to make now that we have left the EU, delivering on our post-Brexit agenda across Whitehall.”

Senior Tory backbencher Sir Bernard Jenkin sounds skeptical about the mini-reshuffles and change of personnel at No 10 – saying many MPs are looking for change in the “character” of government.

See also  From SNL and his Kanye feud to flying into space: How Pete Davidson became the center of absolutely everything

“He’s got to sort this out, we are not interested in the optics, in some impression of a reset,” the liaison committee chair told Sky News.

“We’re looking for a change in the capability and the character of the government, so that we can have confidence that nothing as mortifying as this partygate episode will happen again.”

An update on the PM’s mini reshuffle now, not long after it was revealed that the Tory MP at the center of Islamophobia allegations now has a role overseeing parliament’s complaints system.

Mark Spencer, who was chief whip, was made Leader of the House of Commons on Tuesday, replacing Jacob Rees-Mogg. Among the responsibilities of the job is “upholding the rights and interests of the backbench members of the House”, according to the government’s own description.

The Commons leader is the custodian of the complaints system, as well as all standards-related matters. Yet, Mr Spencer was criticized last month after a fellow Tory MP claimed he told her the fact she was a Muslim was making her colleagues uncomfortable.

Our politics reporter adam forrest has the following:

Cabinet minister Michael Gove has been talking about inequality and his leveling up plan at the Convention of the North in Liverpool.

“We simply can’t go on with the gulf between rich and poor, north and south, growing. It’s a matter of social justice, it’s also a matter of economic efficiency,” he said.

Challenged about the role the Tory government has played in that gulf, Mr Gove pointed to the delay caused by the Covid pandemic.

“But I can understand why communities who faced a tough time during austerity will be, at best skeptical, at worst cynical about the government’s commitment,” he said, adding the government would be “held to account” over its leveling up plan.

Asked about Boris Johnson’s Savile smear against Keir Starmer, he said: “It’s a uniquely sensitive issue, and the sooner we move on the better.”

See also  Teenager makes £1,000 profit after setting up trainer business with birthday money from his parents

Scotland’s first minister has described the abuse Sir Keir Starmer suffered on Monday night as “sickening”, insisting Boris Johnson must “fully, unreservedly and unequivocally apologise” for the remarks he made about Jimmy Savile.

Speaking from “personal experience” of far-right attacks, Nicola Sturgeon said no political “should have to put up with what Keir Starmer experienced last night”.

“It is a reflection of the toxic cocktail of conspiracy theories, smears and lies that swirl around our politics now,” she said, before accusing Mr Johnson of “weaponising” such issues “in the full knowledge that that can and does stir up the kind of hatred and abuse and harassment that [Mr] Starmer experienced yesterday”.

She told Sky News that if the PM “has a single shred of decency, he will withdraw his comments”.

Ms Sturgeon went on to praise Mr Starmer and David Lammy, who was also mobbed by protestors, “for the way they conducted themselves”.

“I have had some personal experience of being confronted on the streets by the far right, it’s not pleasant, it’s deeply unpleasant, and I’m sure they will have been deeply shaken by it,” she said. “I think they deserve credit for the way in which they handled it.”

‘Operation shag a dog?’: MPs’ confusion over plan to save Johnson

Let’s start with this. The Downing Street operation to save Boris Johnson’s job was mistakenly referred to as “Operation Shag a Dog” in the Commons amid confusion over nicknames and accents.

Labor MP Jim McMahon, opening a debate on the cost of living, said the government was “too busy saving the job” of the PM to get on with the job of running the country. The shadow environment secretary said: “Operation Shaggy Dog in full force. I think it is absolutely outrageous.”

Hello, I’m taking over our live politics coverage now, and will be with you until around 9pm (GMT).

Stay tuned for all the latest Westminster updates, including any information we get on Boris Johnson’s mini-reshuffle.

Jacob Rees-Mogg said he did not collect feeding the PM the debunked jibe about Sir Keir Starmer failing to prosecute Jimmy Savile while the Labor leader was director of public prosecutions.

Asked about a report in The Sunday Times that suggested he gave Boris Johnson the idea for using the attack line in the Commons last week, the new “Brexit opportunities” minister told Conservative Home’s The Moggcast: “That isn’t my recollection.

“What was going on at the time was a very noisy chamber and people were shouting things out.

“I think it came from behind us, but it seemed to me a perfectly fair point to use.”

Pressed on whether he was sure it did not come from him, the Cabinet minister replied: “I certainly mentioned the point about journalists in the back and forth across the chamber, but I think it came from behind both of us.

“I wasn’t sitting next to the prime minister, so I wasn’t in a particularly good position to be feeding him lines.”

James Cleverly MP will become Minister of State (Minister for Europe) in the Foreign, Commonwealth and Development Office as part of the shake-up of the government frontbench, Downing Street said.

New polling by Savanta/ComRes reveals more than two-thirds of people (69 per cent) say Boris Johnson is responsible for the behavior of protestors that harassed Sir Keir Starmer.

That figure includes 54 per cent of 2019 Conservative voters.

Some 68 per cent the prime minister should publicly apologize to Sir Keir for his comments in the Commons about Jimmy Savile, and a similar figure say politics has got “nastier” over the last five years.

The polling was carried out on February 8 of 1,094 adults.