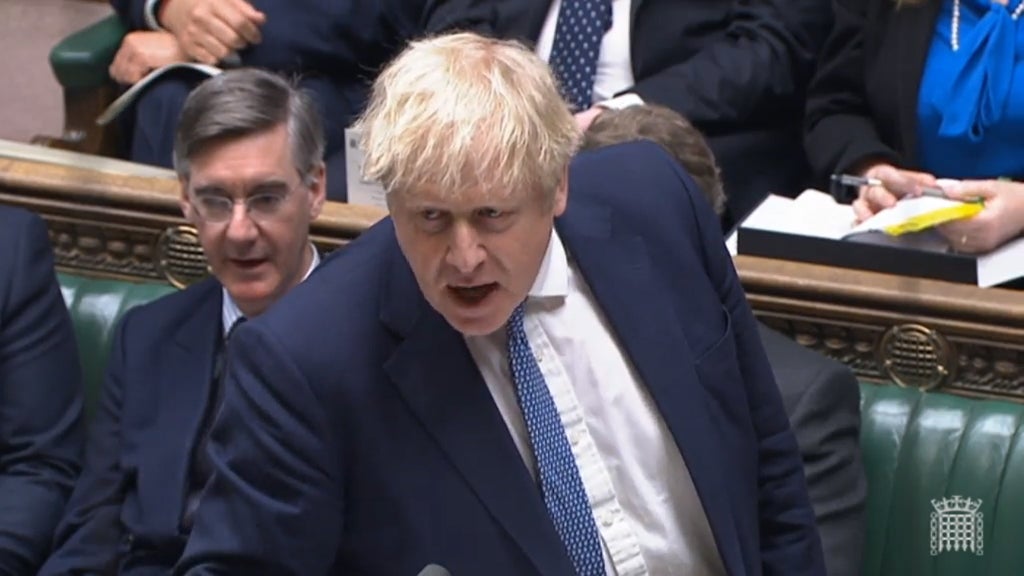 Related video: PM refuses to say if he was at lockdown ABBA party in own flat

Three Tory MPs have announced submitting letters of no confidence against Boris Johnson in a single day, bringing the total number to publicly call the prime minister to resign amid the Downing Street parties scandal to 12.

As Mr Johnson prepared to face Sir Keir Starmer at PMQs on Wednesday, former minister Tobias Ellwood announced he was sending a letter to 1922 Committee chair Sir Graham Brady – 54 of which are needed to trigger a leadership vote.

The influential Tory MP was followed by Anthony Mangnall, who said the PM’s “actions and mistruths are overshadowing” the work of his colleagues. Shortly afterwards, veteran Tory Gary Streeter said the same, saying: “I cannot reconcile the pain and sacrifice of the vast majority of the British public with attitude and activities of those working in Downing Street.”

Meanwhile, the Belfast government announced that Brexit port food checks in Northern Ireland will be halted from midnight on Wednesday – reigniting the battle with the EU over the inspections. It came as leveling up secretary Michael Gove delivered his long-awaited statement to MPs on how the government intends to close the gap between richer and poorer regions.

In his latest column, The Independent‘s political sketch writer Tom Peck suggests that Boris Johnson’s “personal popularity has always depended on people never actually knowing who he really is”.

He writes: “But the never-ending saga has very publicly killed off the clown act at the worst possible time – when absolutely everybody is watching.

“That he doubled down on his Jimmy Savile slander at PMQs will have surprised no one. That is the level to which he has been reduced. But what will surely have worried the Conservatives more are the other accusations Starmer was able to level at him, which ring more than a little bit true.

“… They will have to ponder whether they’re really going to get as much payback as they thought from this guy whose most recent budget was mourned on the front of The Daily Telegraph as the ‘death of Conservatism’.

“Are they absolutely sure the guy who’ll promise absolutely anything to anyone if it gets him through the next 20 minutes won’t, by the time of the next election, be juggling too many plates, spinning too many lies, that the whole Ponzi scheme of bulls*** promises just comes crashing down.”

You can read his full take on the situation here:

See also  Price of petrol soars to record high at £1.99 a liter but wholesale prices begin to slump

Ministers ‘can’t have it both ways’ on NI protocol, Labor warns

Labour’s shadow Northern Ireland secretary has said that “ministers can’t have it both ways”, after his opposite number Brandon Lewis suggested the DUP’s decision to order a halt to Brexit checks on agri-food at ports was “a matter for” Stormont.

“Why are the EU negotiating with Liz Truss if it’s “a matter for the Northern Ireland Executive?” asked Peter Kyle.

After some confusion, The Sun‘s political editor has clarified that Boris Johnson has said he is focused on the “next election”, which as things stand is due to be held in 2024, rather than 2023 – as previously reported in his interview with the PM tonight.

Hours ahead of the planned phone call between Vladimir Putin and Boris Johnson today, Russia said it will hold diplomatic talks with anyone – even the “utterly confused”.

“It makes sense to speak to anyone. Russia and President Putin are open to communicating with everyone. Even to someone who is utterly confused, he is prepared to provide exhaustive explanations,” Kremlin spokesperson Dmitry Peskov said.

Russia’s foreign ministry went even further with the insults, mocking foreign secretary Liz Truss for saying Britain was sending supplies to its “Baltic allies across the Black Sea” – two bodies of water that are on opposite sides of Europe.

“Mrs Truss, your knowledge of history is nothing compared to your knowledge of geography,” Russian Foreign Ministry spokesperson Maria Zakharova wrote in a blog post. “If anyone needs saving from anything, it’s the world, from the stupidity and ignorance of British politicians.”

My colleague Rory Sullivan has the full report here:

Johnson warns Putin any Ukraine invasion would be ‘tragic miscalculation’

Our political correspondent Ashley Cowburn has more details on Boris Johnson’s phone call with Vladimir Putin today, which had been delayed due to the prime minister’s domestic Partygate troubles.

After the call, which lasted around 45 minutes, a No 10 spokesperson made clear the “right to aspire” to Nato membership applied to Ukraine – a move strongly opposed by Mr Putin.

Labour’s shadow transport secretary Louise Haigh has claimed the “cat is out of the bag” on “lost” funding previously pledged by Boris Johnson to transform the country’s bus networks.

“We need to see first and foremost a proper plan to deliver bus connectivity and actually the cat’s been let out of the bag today – the transport secretary’s revealed that the £3bn-worth of funding for bus transformation that was promised just last year by the prime minister actually only amounts to £1.2bn,” Ms Haigh told the BBC.

“So we’ve lost over half of that funding, which means vast swathes of the country are not going to see any investment at all in bus services.”

She alleged that over recent years there has been a “managed decline of bus networks across the country”, adding: “It’s astonishing to me that coming out of the pandemic we wouldn’t be seeing investment in public transport.”

Here’s footage of leveling up minister Neil O’Brien telling LBC about the benefits of the government’s new strategy:

He said: “The four pillars of that strategy are, firstly, about getting more good jobs, more high-paid jobs, particularly in areas where there are not enough.

“The second bit is about uplifting people’s skills and spreading opportunity and improving public services. The third is about regenerating the public realm, restoring pride in place – whether it’s sorting out run-down town centers and high streets, or sorting out anti-social behavior and disorder.

“And the last thing is about empowering local areas, because this is a terribly, terribly centralized country. Too many decisions are made in Westminster and there’s not enough power for local leaders.”

‘I’ve got a lot more to do,’ Boris Johnson claims

Boris Johnson has insisted “I’ve got a lot more to do” and said he will seek re-election in 2023, in an interview with The Sun.

But the paper reports that the prime minister is at a loss to explain how his popularity has plummeted in just a few months, saying: “I make no commentary but I am focused on the next election.”

Speaking after the government set out its flagship leveling up plans today, Mr Johnson said: “The gap between the London and South East and the rest of the country is bigger than the economic gap in any other comparable country. We have a bigger productivity gap than any such country; but we can fix that.

“Do you seriously think that people in these areas are possessed of any less imagination, energy? Drive? Zap? cool? gumption? Flair? No no no. They are not.

“They just haven’t been given the chances, and they haven’t been allowed to believe they can do things and we need to change that.”

Asked about the DUP’s decision to halt Northern Ireland Protocol checks, an Irish government spokesperson said: “The Protocol is part of an international agreement agreed and ratified by the UK and EU to protect the Good Friday Agreement in all its dimensions.

“The UK has an obligation under international law, and domestic law to give proper effect to the terms of the Protocol.

Westminster will not intervene in DUP’s Brexit gambit, minister indicates

The UK government will not intervene in the DUP’s decision to halt Brexit checks in the Irish Sea, the secretary of state for Northern Ireland, Brandon Lewis, has indicated.

“Obviously this is a matter for the Northern Ireland Executive, it is something that is within their legal remit,” he told ITV’s Robert Peston.

“Obviously we’ll be looking at the outworkings of that, exactly what the legal advice is they have taken.

“One of the frustrations is, this I have to say, is something we have been saying to the European Union for some time, was the kind of thing that we could see happening.

“It’s exactly the sort of thing we have been warning about, in terms of the stability of the Executive and the decisions the Executive ministers will take in order to ensure that products can move from Great Britain to Northern Ireland in a way that they always have donate.”