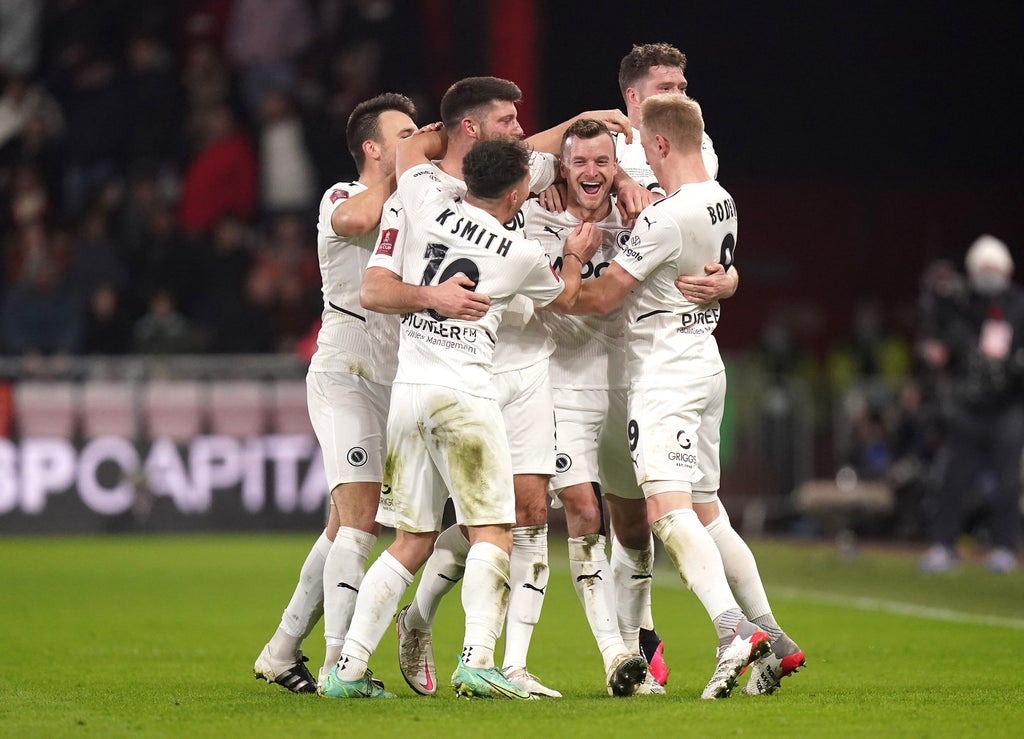 The National League side will now travel to Premier League Everton in the fifth round without having conceded a goal in their five matches in the competition so far, with this momentous win extending their unbeaten run to 17 games.

All of the club’s players and coaching staff ran onto the pitch to celebrate their well-deserved 1-0 win with the jubilant traveling crowd.

Boreham Wood showed few signs of nervousness in the early stages and even spooked their hosts when Josh Rees tripped over Nathaniel Phillips’ outstretched leg, prompting massive appeals from the visitors. Referee Graham Scott was unfazed.

The Woods have the best defensive record in the top five leagues behind Manchester City and they were set to frustrate the Cherries. Undefeated in 16 matches, they were undeterred on their trip to the South Coast.

Manager Luke Garrard selected three central defenders with full-backs Jacob Mendy and Kane Smith transitioning quickly to make it a five-man defense when Bournemouth were in possession, which they usually were.

The visitors then gave quite a scare when they took the lead in the 38th minute. Mendy broke down the left and took the ball to the near post where a sloppy clearance from Gavin Kilkenny fell to Ricketts, 37, on the edge of the area and Ricketts he scored on a low shot to the post to send the 1,500. wild visiting fans.

Choruses of “que sera sera” rang out from the other side as the rest of Vitality Stadium looked horrified. The complaints were beginning and it took until the 45th minute for Bournemouth to register their first shot when Lewis Cook fired high over the crossbar.

The halftime whistle blew and boos rang out.

Scott Parker responded by making two changes with Todd Cantwell making his debut alongside Ryan Christie with the ineffective Cook and Ben Pearson breaking through.

Boreham Wood again had the first chance of the second half when an ill-advised cross from Ricketts nearly caught Bournemouth keeper Freddie Woodman at the far post before the hosts had put the ball to safety.

The frustration continued for Bournemouth, who struggled to overcome the sheer desire of their humble opponents. Parker brought in substitutes three and four of his five allowed with Philip Billing and Jack Stacey tasked with sparking an upgrade.

However, the only major chance until the closing stages came when Christie ran inside the field to pass a pass to Billing, but his lob attempt fell over the roof of the net.

Parker’s final throw of the dice saw him bring in top scorer Dominic Solanke for the final 15 minutes and moments later Bournemouth had the ball in the net.

Christie cut inside again and fired into the right corner where Boreham Wood goalkeeper Taye Ashby-Hammond deflected the ball onto the crossbar.

Billing held on to the rebound and headed against the post before Jaidon Anthony pushed the ball over the line before Billing was properly called offside.

Solanke’s moment came during an exciting five minutes of stoppage time at the end, but he took his shot inches from the far post as the Boreham Wood bench breathed a sigh of relief before they could celebrate a famous FA Cup upset.