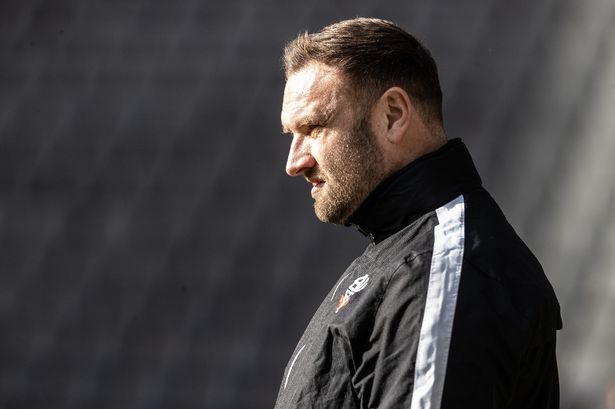 Bolton Wanderers ended February on a defeat with a disappointing 2-0 loss on the road.

Mo Eisa put the hosts ahead in a first half where for most of it, Wanderers were second best.

Amadou Bakayoko struck the bar with a powerful header from Declan John’s corner before the break, before skipper Ricardo Santos headed over from another delivery in the second half.

But the hosts got their second goal when James Trafford’s pass out from the back was pounced upon by Kaine Kesler Hayden and Scott Twine’s deflected effort went in, as Wanderers now sit seven points from the play-off places.

After the boss, Wanderers boss Ian Evatt spoke to the press and here’s his immediate reaction.

Evatt also alleged that match referee Sebastian Stockbridge made comments during the game which the Wanderers camp deem as ‘not acceptable’ in terms of their nature as the Bolton boss suggested the complaints could be reported and taken further to the appropriate channels.

Evatt said that the referee did apologize for whatever was said, but suggested that Bolton could take the issue further.

“I’m not happy. I think the first 20 minutes and a moment of madness in the second half has cost us the game. I think other than the first 20 minutes, we then controlled it for probably 25 minutes. Second half I think they’d gone, I think we’re starting to completely dominate and it was a matter of time and then we just pressed self-destruct and then it was game over. We’re better than that.

“We looked a little bit jaded like it’s been a long month and probably MK are the worst team to play in the eighth game of eight games in a month because they test you physically, but I don’t think we were in any way inferior I think other than 25 minutes first half, we didn’t quite figure out what to do and how to press and how to get pressure on the ball, but once we did that there was nothing and no dangers really.

“We just had to score. We hit the bar with Baka and probably should score, had a chance with Dion, should take a touch and score and then second half we were in complete control. It’s all us, our fans are getting excited and then we just pressed self-destruct.”

Any complaints about handball for their first goal?

“There’s more complaints from the handball from the penalty. It clearly hits his hand which is above his head. I’ll deal with the officials after but for now we’re not happy.”

Do you put that down to the amount of games you’ve had?

“I would say other than 25 minutes and a poor second goal we have dominated the second half. The last 15 minutes of the first half we were in control, we just didn’t start well and were too passive, a moment of self-destruction gifted them the game.”

You made three changes, was that big call or very straightforward?

“MK test you defensively and we needed to play the extra midfield player to give us that defensive security. Jon looked jaded and hadn’t played a lot of games.

“Kyle came in for Dapo and Rico was going to play anyway, he’s our captain.”

You said before this game whatever happens, it’s not the end and you’ve got to go again?

“We feel we have a strong squad now. We are excited to get them on the training pitch because there is loads we can improve on.

“I am just disappointed with the manner of the way we lost the game. Just when we were getting back into it, we self-destructed, and it is disappointing.”

On the comments alleged the referee made during the game…

“We will release something later but for now I need to speak with the officials and the assessor.

“The fourth official heard it and the referee has apologized at half time but that is not good enough, it is not acceptable, and we will be taking it further.”