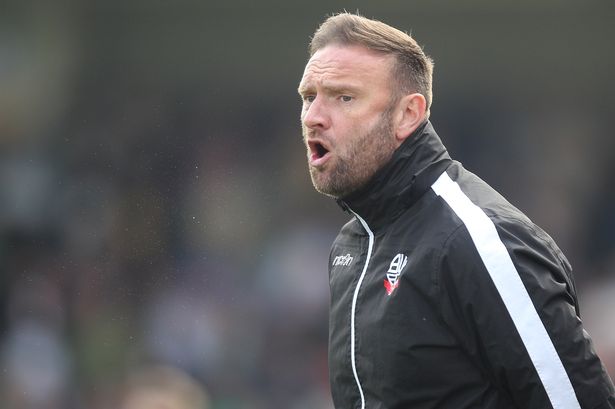 Bolton Wanderers play their final game of the season this weekend in League One when they host Fleetwood Town.

The Cod Army travel to the University of Bolton Stadium this weekend with their status in the third tier still not secure.

Stephen Crainey’s side are outside the relegation zone on goal difference alone ahead of Gillingham as the battle to stay up will go down to the final day.

For Wanderers, they are set for a top 10 finish and can finish as high as ninth if they pick up three points and Portsmouth suffer defeat by a sufficient enough margin.

Ahead of the game, Wanderers boss Ian Evatt spoke to the press and here’s a transcript of what he had to say to broadcasters.

“Yes, obviously the most important thing is that we finish strongly. We’ve done well in recent weeks, in fact we’ve done well since the middle of January, but we want to finish as high as we possibly can. There’s still an opportunity to finish ninth, providing we do our job and fingers crossed we can do that on Saturday.”

Is there already pressure for next season even though this one is not yet over?

“Not necessarily. I think we have to embrace it. I think we are a fantastic football club with a rich history and you’re expected to win, it’s just the way it is.

“The second half’s been really, really positive. We’re happy potentially with our points total as 73 points for a newly promoted team – we have to remember that – is very good and I think six out of the last seven seasons would have been good enough to get into the play-offs.

“Unfortunately not our year but very much looking forward to next year.”

You mentioned last week about approaching this game in a professional manner?

“Absolutely. Do not doubt about that. We have a duty to ourselves and our own fans. We are expected to win. We want to win and we’ve trained really, really well this week and I can see with the players and the mindset and mentality there’s been no holiday mode.

“They’ve been at it, they all want to play and we’ll pick the strongest available team to try and win the game.”

People talk about footballers at this time of the season and flip flops being on and they’re on the beach – but there hasn’t been any illustration of that at all with your team?

“We won’t allow it, as simple as that. I believe that standards come from the top and our owner sets those very well and then it’s down to me as head of the football to set our own standards and make sure that the players know every day, whether it’s a simple passing drill or any other phase of possession that they’re doing, they just have to give it the utmost importance.

“It’s just not accepted any other way and I think they’ve embraced that and you can see from our performances that they still very much are in this season and want to win as many as possible.”

“No, everyone is okay. Rico and Kieran are stepping up their rehabilitation but they won’t be available for Saturday. MJ has got a nasty break from his hand but it is nothing too serious really.

“He has got a bit of a cast which will enable him to fit in a pint glass come the end of the season, which is good for him when he is on his holidays! But other than that, we are all good to go.”

With one game to go with next season in mind, what’s your message to the Bolton Wanderers supporters?

“Massive thank you for an unbelievable support this season, one more to go and we hope we can finish on a high, but I think we’re really proud of the connection that we’ve rebuilt with our supporters and fanbase.

“I think they’re really proud of their team and we’re really proud of them. Three or four years ago it was the complete opposite to that so we must remember how far we’ve come. We know the journey, we know what we’re trying to do, and it’s great that everyone is on board for that journey.”

How have you been training this week?

“I’ve ever been so busy to be honest. Of course we’ve been preparing the players to win the game on Saturday. We’ve got lots of things happening with the B team, things are progressing with that all the time, so things have gone really well this week and it’s been a bit of a hectic week.

“I think in this division what we’ve all learned is that it’s very much two divisions split into one really. You’ve got the top half which are all monster football clubs and predominantly are ones that have been in the Premier League in the not too distant past and then you’ve got teams that have been in the Championship for significant periods of time, spending vast amounts of money, obscene amounts of money really for this level.

“It’s challenging, it’s competitive, but it’s a very good standard. It asks you different questions. People think and speak about the Championship and rightly so that it’s a crazy league and one of the best leagues in the world because of its competitive nature. It offers different challenges and tasks and this league is no different.

“You could be playing Sunderland away one week in front of 40-odd thousand and the next week, you could be at Morecambe away and it’s a completely different game and you’ve got to adapt yourselves to win both games. We’ve learned from that this season but always the philosophy will remain the same. We want to dominate the ball and dominate possession and control that way but you have to find different solutions in those different challenges in games. As the season has worn on, we’ve learned our lessons and found those solutions.”

Are you looking for more possession based football for next season when the transfer window opens?

“Absolutely. I think what I’ve developed is I have a belief and a brand and an identity that I’ve brought here. It started at Barrow and it’s continued here and it’s very much a work in progress.

“We’re adapting and progressing all the time. We want to control the ball and have possession but it has to be with a purpose. At times this season, it hasn’t been that but we’re still going through our education. It all depends on the opposition and the players have to find those in game solutions. We can do all the analysis in the world but opposition are now respecting what we do and changing for us so everything that we worked on, it might be different come Saturday.

“The players have to understand ‘if they do this, we do this’ and we’re continuing that education all the time. If they’re a high press and the space is the third line, then we play over the press. It’s still possession football, it’s still with quality but it’s understanding the look of the opposition and where they’re pressing the ball and then where the space is and then identifying that and playing with progression accordingly. That’s what we’ve developed and improved on the second half of the season.”

Bolton can still have a part to play in who stays in this division and that is the case against Fleetwood Town – what test will they offer?

“I watched the game the other night against Sheffield Wednesday and they scored from a high press situation and a set play. Other than that, they sacrificed the ball and were hard to beat and worked their socks off because they’re fighting to stay in this division. I would be amazed if they came here and threw the game open.

“I can’t envisage that happening because I think what we have come from is if you go toe to toe with us, you can get hurt and I think they’re in a position where they have to only match Gillingham’s result so I think it would be pretty crazy for them to come here and go all guns blazing and all out attack because we have attacking weapons that can hurt you.

“I think it’ll be cautious from them. I think they’ll keep their eye on the Gillingham score and then they’ll adapt their gameplan accordingly but I would think fundamentally they’ll play on the counterattack, sacrifice the ball and be hard to beat.”

There will be a lap of honor afterwards which is going to be nice – how much are you and the players looking forward to that?

“That will be so much better with a win and I think that’s the message to the players really for the player of the year do, the lap of honor after the game, the entire summer, I don’t want to go away with a bitter taste in my mouth and I certainly do not want to watch another team celebrating on my football pitch.

“It’s as simple as that and I just don’t want to see it. We have to make sure that doesn’t happen on Saturday and if it happens because Gillingham haven’t done their job but we’ve done ours then that’s different to if we don’t do our job and win the game.