Callum McGregor believes it’s now more important than ever for everyone connected with the national team to show Gilmour some love as the 20-year-old Chelsea midfielder looks to put a dispiriting loan spell at Norwich City behind him.

Gilmour became a target for criticism from some Norwich supporters as the Carrow Road finished bottom of the English Premier League and dropped out of the top flight once more.

That won’t alter the high regard Scotland manager Steve Clarke has for Gilmour who is set to win his 13th cap for his country in Wednesday’s World Cup play-off semi-final against Ukraine at Hampden.

There is certainly no doubt in McGregor’s mind that his young central midfield partner’s career can continue to flourish, so long as he receives the unconditional backing of those around him in every aspect of his time with the national team.

“Listen, he’s a young kid and everybody goes through this,” said McGregor. “You come in, you start on fire, you have a little dip and then you come back.

“I watch Billy every day in training and he’s top level.

“He’s confident with the ball. He can take it under pressure, he can play one or two touches. His performances of him for Scotland have been first class.

“Everybody has difficult spells in their careers. With Billy, because everyone hyped him so highly at the start it’s inevitable he’s going to have a dip in form at some point.

“What we have to do as a nation is help him. Give him the confidence and tools to go play. Tell him, ‘this is your stage, go enjoy it. We’ll look after you’.

Callum McGregor (centre) with Billy Gilmour (right) during a Scotland training session at Oriam in Edinburgh on Sunday ahead of the World Cup play-off semi-final against Ukraine at Hampden on Wednesday. (Photo by Paul Devlin/SNS Group)

“He has been exceptional for us and has shown that ability. So this season is maybe a little bit of a blip.

“Circumstances – in terms of the team you are playing in – can kill you a little bit as well.

“But he is a top player and if he comes through this little sticky spell then he will come back again. The strong ones come back and go again and I’m sure Billy will.

“He absolutely has a strong mentality in any case. You don’t get to this level without being mentally strong and being able to go again every three days with all these big games.

Billy Gilmour experienced a difficult loan spell at Norwich City as they were relegated from the English Premier League. (Photo by Marc Atkins/Getty Images)

“The situation at Norwich will help him even more as well.

“You have to face adversity in your career to learn. When it’s all going well it’s brilliant. You think it’s never going to end.

“But then one day, bang! You get a slap in the face and that brings you back down to earth.

“But that allows you to learn and I’m 100 percent sure he feels that way too.

McGregor has often credited his own loan spell at then English League One side Notts County nine years ago, where he was embroiled in a relegation battle, as a crucial part in his development.

“You go away, you live in a different place, all of that has an impact,” says the Celtic captain.

“It’s similar for Billy who moved away from London and had to find his feet in terms of his personal life.

“All of that is a big challenge. He goes from playing for one of the top teams in the country in Chelsea having the ball every week to going and playing for a team that doesn’t have the ball a lot.

“It becomes difficult, especially for someone like Billy who likes having the ball a lot.

“He then has to adapt his game and become a little bit more defensive and read the game slightly differently.

“And then when you get the ball you have to look after it.

“So it is two totally different ends of the spectrum he has been exposed to and I am pretty sure that he will now appreciate having the ball when he plays for the top teams.

“That maybe didn’t happen so much at Norwich. But that’s a brilliant learning curve for him as well.”

McGregor has formed a potent partnership whenever he has played alongside Gilmour for Scotland, one they are likely to be asked to reprise against Ukraine with the other leading contender for a central midfield role, Ryan Jack of Rangers, having been forced to withdraw from the squad because of injury.

“We just play it simple,” says McGregor when asked why he and Gilmour have hit it off so well. “Modern day football is one and two touch all the time.

“You very rarely see players dribble with ten or 11 touches unless they are trying to break through into the box.

“It’s three touch maximum, especially in midfield where you have to move the ball quickly. Billy does that and sees the pictures really quickly.

“He sets you up for the ball. You play him, he plays you, you play forward and it’s a good balance. He has shown a really high level when he has played for Scotland.”

See also  When does Passover 2022 start, how long is it, and how to wish someone Happy Passover 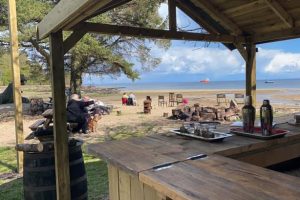