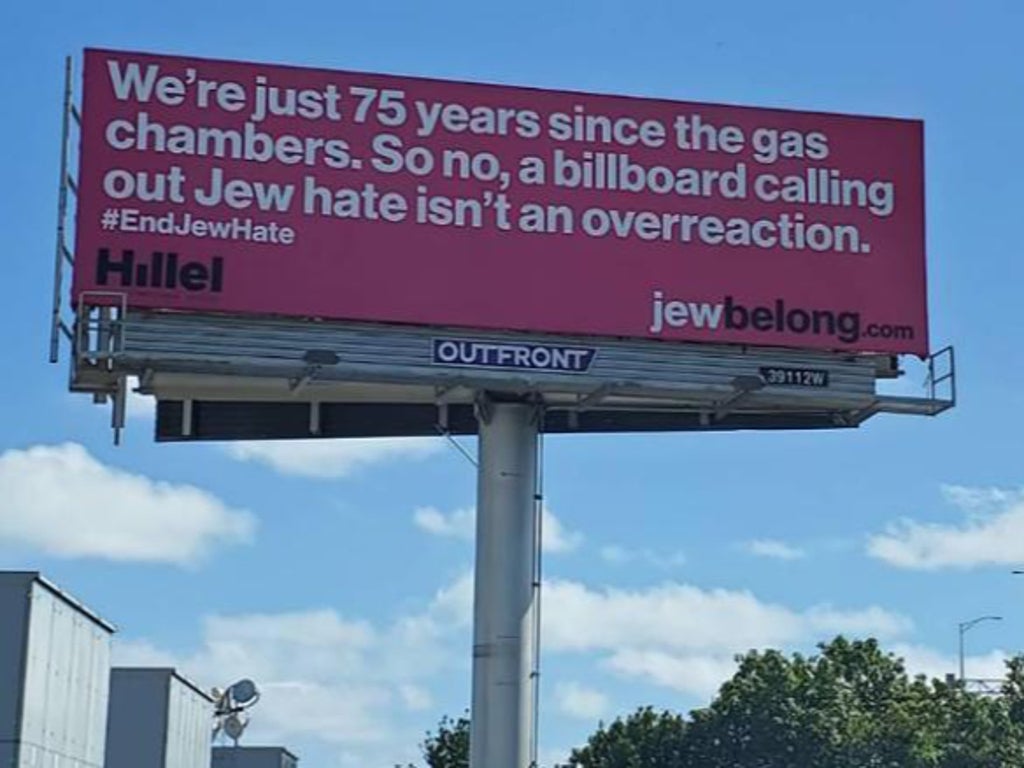 The non-profit organization Jewbelong, which works to help and encourage Jewish people, has put up four billboards in South Florida bringing attention to antisemitism.

The billboards, which are part of the organization’s #EndJewHate campaign, were put up on Friday in Miami-Dade and Broward counties.

Concerns about antisemitism have risen across the country and the campaign comes a week after a man in Texas held four people hostage at a synagogue in a standoff that went on for hours as well as several instances of anti-semitic vandalism in Chicago, Illinois.

Nazis demonstrated in Orlando, Florida last weekend as well as the week before, with hundreds of antisemitic flyers being distributed all over South Florida.

According to the Anti-Defamation League (ADL), antisemitic incidents are at a historical high point.

Jewbelong co-founder Archie Gottesman told CNN that “we need to talk about it and we need to be uncomfortable for a minute”, adding that she believes that the campaigns will prompt “important conversations”.

According to an ADL report, there was a 40 per cent increase in harassment and vandalism in Florida between 2019, when 91 incidents were reported, and 2020, when 127 incidents occurred.

“There’s a lot of ways to stem bad things from happening – there’s education, podcasts, articles and books – and they’re all important,” Ms Gottesman told CNN. “To fight hate, we need a lot of tools in our tool belt and our awareness campaign is one really important tool.”

“We’re just 75 years since the gas chambers. So no, a billboard calling out Jew hate isn’t an overreaction,” one of the billboards state.

“Does your church need armed guards? Cause our synagogue does,” another billboard asks. The messages have previously been put up in New York City, Boston, San Francisco, and Las Vegas.

Toronto is set to be included in the campaign in the future. Ms Gottesman said the non-profit looks for locations where the messages can get the best visibility. She added that the group hopes to take their campaigns all over the country and that more billboards will appear in Florida in the coming months.

“It’s really important to not just drop the subject because I don’t think it’s getting any better and until it starts getting better, we have to keep fighting,” she said. “Sometimes you have to be a little bit compelling and a little different, to get people’s attention.”

More than a dozen self-proclaimed Nazis yelled antisemitic slogans outside a Florida shopping plaza and waved a swastika flag from a highway overpass before authorities broke them up late last month.

The demonstrators, wearing Nazi garb, protested at an intersection near the University of Central Florida on 29 January and on a highway overpass on 30 January.

During the demonstration on 29 January, some participants got into a fight with a passerby, but no arrests were made at the time, according to the Orange County Sheriff’s Office.

Authorities from the Florida Department of Highway Safety and Motor Vehicles and the Florida Highway Patrol said in a statement that they and sheriff’s deputies had disbanded the group on the overpass on 30 January.

“It is against the law to obstruct highway traffic or hang signs on the overpasses and violators will be prosecuted,” the statement said.

Orange County Sheriff John Mina said any reports of criminal activity by the group would be investigated by his agency. Orange County in central Florida is home to the nation’s biggest theme park resorts.

“I along with the Orange County Sheriff’s Office deplore any type of hate speech,” Sheriff Mina tweeted. “This hatred has no place in our society.”