The metal workers from Bizkaia have ended the week of strike, “in defense of the collective agreement.” “Once again, the follow-up has been massive, and thousands and thousands of workers have once again filled the streets of Bilbao,” the ELA union pointed out in a note. The unions have encrypted the follow-up of the strike at 85% this week.

This morning they have registered several tires on fire, From burning containers and some roadblocks in different parts of Bizkaia, during the fifth day of strike by metal workers in Bizkaia.

According to sources from the Security Department of the Basque Government, around the 06:00 hours Tires have caught fire on the Bi-623, in Izurtza, as well as on the Bi-3447 in Gizaburuaga and on the Bi-3336, as it passes through Abadiño, which have suffocated firefighters.

In addition, in the municipality of Elorrio, two containers have burned, one of them in the Polígono de Besaide, and another in Errebonbillo street in the town. The flames have also been extinguished by firefighters. 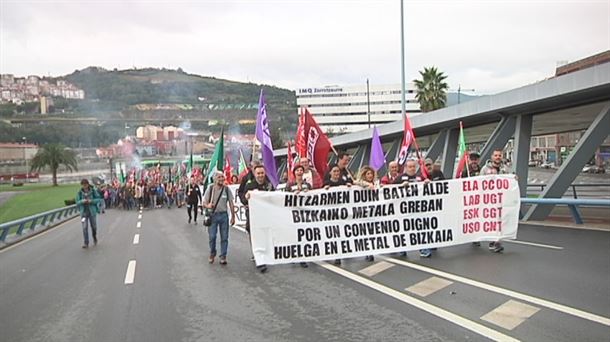 Head of the demonstration on the Euskalduna bridge in Bilbao. Image obtained from an EiTB video.

All unions with representation in the metal sector of Bizkaia -ELA, CCOO, LAB, UGT, ESK, CGT, USO and CNT- have convened a manifestation for this noon in Bilbao, so that the metallurgists have traveled the main streets of the capital of Biscay in favor of labor improvements.

UGT: “If it is necessary to mobilize again, it will be done”

Thus, two columns of protesters have departed since two different points from Bilbao. Specifically, the first of them has come from San Mamés, while the second has started in the vicinity of the clinic building IMQ Zorrotzaurre.

After touring the main streets on this last day of the strike, the two columns of metal workers from Bizkaia have come together in Sacred heart, to go Gran Via and head up the Arenal.

The general secretaries of ELA, Mitxel Lakuntza; CCOO of the Basque Country, Loli García; and LAB, Garbiñe Aranburu, as well as Lander Martínez (from Elkarrekin Podemos) and Oskar Matute (from EH Bildu), among other political representatives.

During the development of the demonstration, unknown persons have set fire to some containers at the height of Alameda Urquijo street.

The unions consider the mobilization “a success”, supported by about 85% of the workers, according to their data, and they do not rule out new calls to strike, although they have also shown their willingness to negotiate with the Biscayan Federation of Metal Companies.

“We believe that it is through mobilization and strikes that we are going to achieve our objectives: a sectoral agreement in Bizkaia that dignifies working conditions, with which we understand that the fight must go on“, said ELA representative Mikel Etxebarria.

According to the UGT representative José María Rojo, the “success” of the strike must serve for the employers to “take notice” and present “serious proposals” at the negotiating table. “We offer our hand to continue”, has indicated.

However, “if it is necessary to mobilize again, it will be done”, the union member has warned, who has affirmed that the unions must analyze the next steps to follow, without ruling out the call for more strikes.

ELA: “You no longer distinguish whether the speaker is the employer’s spokesperson or the Lehendakari himself”

For his part, the general secretary of ELA, Mitxel Lakuntza, has described as “very serious” that the lehendakari, Iñigo Urkullu, “dedicate himself to being the spokesperson for the bosses” in the conflict in the sector.

In an interview with Radio Vitoria, he has referred in this way to the position of the Lehendakari before the conflict of the metal workers of Bizkaia.

“You no longer distinguish whether the speaker is the employer’s spokesperson or the Lehendakari himself,” he added. Lakuntza has stated that Urkullu’s statements on this issue are “totally absurd and inadmissible.”

In the opinion of the ELA leader, they show a “lack of sensitivity and a tremendous distance”, besides “a sample of a character of certain arrogance”.