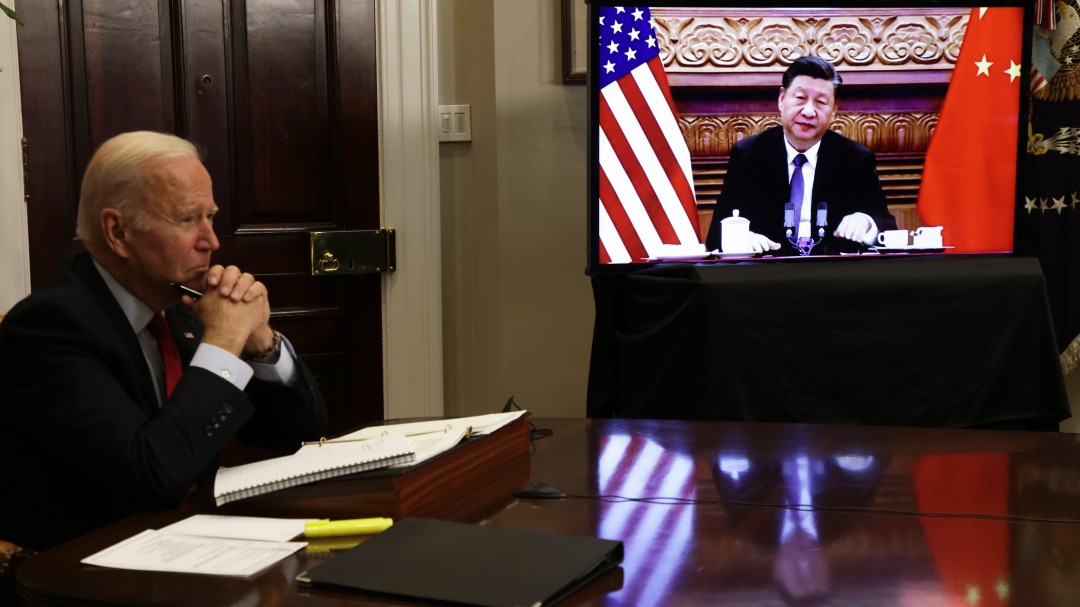 The president of the United States, Joe Biden, has urged his Chinese counterpart, Xi Jinping, on Monday not to turn the “competition” that their countries have into a “conflict” in their first virtual meeting, in which the leader of China he has advocated “mutual respect” between countries.

The long-awaited videoconference between the leaders, which is their first face-to-face meeting since Biden arrived at the White House, took place on Monday night, and began with the US president appealing to the “responsibility” of both for its international relations.

The White House tenant has asked Xi to “ensure that competition” between countries “does not drift into conflict, whether intentional or not,” but is “simple and direct competition.”

The need to be “clear and honest”

“It seems to me that we need to establish some common sense barriers, be clear and honest when we disagree, and work together where our interests intersect, especially on vital global issues like climate change,” Biden said.

It has also stressed that none of this is a “favor” for Beijing or Washington, if not that “what they do for each other” is a “responsible world leadership.” “And you are an important world leader, like the United States,” he acknowledged.

Along these lines, he stressed that the bilateral relationship between China and the United States “will have a profound impact” on both territories, but also on “the rest of the world”, therefore, he added, “all countries have to play with the same rules. “

Giving way to the different issues to be addressed, Biden has demanded a relationship in which both are “open and sincere” and a communication “honest and direct” about the priorities and intentions of both parties.

For his part, Xi has referred to his “old friend” to emphasize that both China and the United States face “multiple challenges together” and advocate for the “communication and cooperation” of both as the “two largest economies in the world” and permanent members of the UN Security Council that they are.

“We must all manage our internal affairs well, while at the same time shouldering our share of international responsibilities and working together to advance the noble cause of world peace and development,” he said.

Thus, he pointed out that this is the “shared desire” of the people of the two countries and “of the whole world.” “A strong and stable relationship between China and the United States is required to promote the respective development of our two countries and to safeguard a peaceful and stable international environment, including the search for effective responses to global challenges such as climate change, to which it made reference, and the COVID-19 pandemic “, has deepened.

For this reason, he stressed that Beijing and Washington “must respect each other, coexist in peace and seek mutually beneficial cooperation”, and has expressed his willingness to work with Biden to “generate consensus, take active measures and advance relations in a positive direction “.

“Doing so would promote the interests of our two peoples and respond to the expectations of the international community,” said the Chinese leader at the beginning of his dialogue with Biden.

Taiwan is one of the issues with the most conflict

The virtual meeting comes after Beijing recently published a statement expressing its willingness to “improve exchanges and cooperation” with the United States. In addition, both countries reached an agreement last week to accelerate their actions in the fight against climate change.

However, tensions are also currently developing between countries. Among them, Taiwan is one of the issues that generates the most conflict in the bilateral relations between the two powers, as the island with the support of Washington denounces the constant overflights of Chinese military planes in Taiwanese airspace, which China has criticized.

Beijing considers Taiwan as part of its territory even though it has been ‘de facto’ independent since the end of the Chinese civil war in 1959.

Furthermore, Washington condemns the “genocide and crimes against humanity” carried out by Beijing in the repression of Uighur Muslims and other minorities in the Xinjiang region.

Rangers v Hearts: Why Hampden should be a stage for Alex Lowry – but not John Souttar