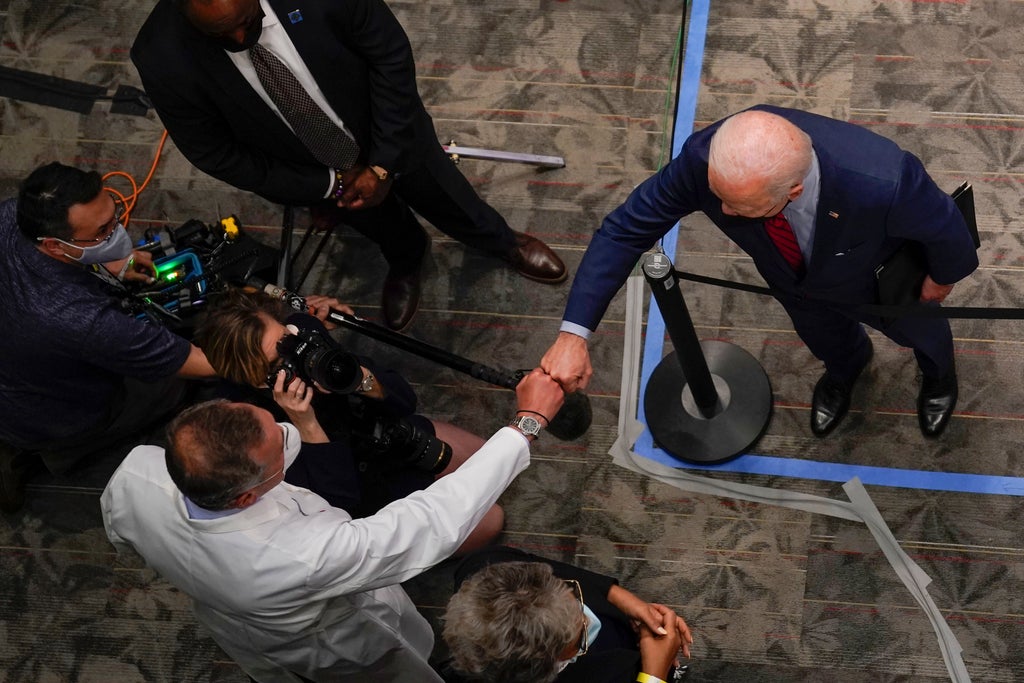 President Joe Biden, renewing his pledge to “end cancer as we know it,” plans on Wednesday to announce a multipronged effort to bolster prevention, screening and research, with the goal of reducing the death rate from the disease by 50 per cent during the next 25 years, senior administration officials said.

The initiative, which Biden is scheduled to outline to 100 cancer researchers, advocates and patients gathered at the White House, represents the relaunch of the “cancer moonshot” that he headed as vice president in the last year of the Obama administration.

Biden and his wife, Jill, embraced the cause with fervor after the death of their 46-year-old son, Beau, from brain cancer in 2015. Biden has often said his work on cancer reflected the almost-unbearable frustrations the couple felt as they struggled to find the best care for Beau.

The moonshot reboot features a long list of goals, and Jill Biden will be heavily involved, according to the two officials who briefed reporters. The plan includes urging Americans to resume cancer screening to make up for the millions of tests missed during the coronavirus pandemic; providing more equitable access to care; and improving the lives of patients during treatment and beyond. The blueprint calls for a new “cancer Cabinet” of officials from across the federal government to coordinate activities, and for the speedup of liquid biopsies to detect multiple cancers through blood tests.

One thing the project doesn’t have: plans on how to pay for it.

“The goals are clear and important, but what’s not clear is how we get there,” said a cancer advocate who spoke on the condition of anonymity to avoid the ire of the White House. “Where are the dollars coming from?”

An administration official, asked by reporters why there was no funding included in the initiative, said the White House wanted to start with a broad discussion about ideas. He added that he was “very confident” Congress would provide robust funding because anti-cancer measures often win bipartisan support.

Congress provided $1.8 billion for the 2016 moonshot, parceled out over seven years. Two years of funding remains, totaling about $400 million. Cancer advocates worry that without a substantial infusion of money, cancer efforts, including those of the National Cancer Institute, could be hampered. They said they would press Biden to lay out concrete funding proposals in his State of the Union address, scheduled for March 1.

“We need to understand that if we’re really serious about this, we need to make sure there’s funding available to develop the new technologies and implement them,” said Margaret Foti, chief executive of the American Association for Cancer Research. “New technologies are expensive.”

Biden, as vice president and as a 2020 presidential candidate, sometimes talked about curing cancer but has since reverted to more measured language. A year ago, during a visit to a coronavirus vaccine manufacturing facility in Michigan for the drugmaker Pfizer, Biden said, “I want you to know that, once we beat covid, we’re going to do everything we can to end cancer as we know it” – the language repeatedly used by aides to describe his new road map.

The centerpiece of the president’s plan – to cut the mortality rate for cancer by 50 per cent during the next 25 years – is an ambitious but attainable goal, said the two administration officials who briefed reporters. They noted that the death rate has fallen by about 25% in the past 20 years, in large part reflecting a sharp reduction in tobacco use, but also because of new treatments, including immunotherapy and precision medicines.

Some cancer experts said the goal of a 50% reduction was too modest and called for a more aggressive target. But Deb Schrag, an oncologist at Memorial Sloan Kettering Cancer Center, said the White House goal was appropriate. At some point, she argued, the decline in tobacco use might slow. At the same time, cancers related to obesity, such as uterine and pancreatic malignancies, are expected to continue to rise or, at best, plateau.

“We don’t have a good solution for obesity,” she said.

Some cancer experts welcomed what they called a more realistic view of the cancer challenge.

“We have had some disappointment with overly ambitious goals,” said Clifford A. Hudis, chief executive of the American Society of Clinical Oncology. “I think realism and maybe even over-delivering is better.”

But others said many of the steps described by the White House are not new and called for much more far-reaching efforts to defeat a disease that kills more than 600,000 Americans a year.

Biden’s announcement on moonshot 2.0 comes about a month after the 50th anniversary of the signing of the National Cancer Act by President Richard M. Nixon – the start of what has been dubbed the “war on cancer.” The act bolstered the National Cancer Institute to tackle cancer and created national networks to conduct clinical trials.

But as the Bidens discovered during their son’s illness, navigating the world of cancer as a patient or family member remains excruciating. As head of the moonshot initiative in 2016, Biden decried technical roadblocks in electronic health records that made it impossible for him to transfer his son’s records electronically from one hospital to another. On research, I have repeatedly urged scientists to move faster and to collaborate more.

In a recap of activities on the original moonshot, the National Cancer Institute said it has supported hundreds of research projects, including expanding the use of immunotherapy, overcoming cancer’s resistance to treatments and finding new ways to treat pediatric cancer.

“The original moonshot demonstrated that it was possible to compress a decade’s worth of progress into a few short years,” said Ellen V. Sigal, chairperson and founder of Friends of Cancer Research, an advocacy group. “We can’t afford to not make that opportunity a reality again.”

After Biden’s term as vice president ended, he and his wife created the Biden Cancer Initiative, a nonprofit organization that focused on issues such as increasing enrollment in clinical trials and improving treatments by community oncologists. The organization suspended operations in 2019 after the Bidens stepped away to concentrate on his presidential bid.

As president, Biden asked Congress for $6.5 billion to fund a new agency, called Advanced Research Projects Agency for Health, to propell breakthrough medical treatments for cancer, diabetes, Alzheimer’s and other life-threatening diseases. The proposal sparked controversy over whether to base the agency at the National Institutes of Health or have it be a stand-alone entity. In the briefing with reporters Tuesday, the administration officials reiterated support for basing the agency within NIH.

Recently, Sen. Patty Murray, D-Wash., chairwoman of the Health, Education, Labor and Pensions Committee, told The Washington Post that lawmakers are in talks with the White House about potentially including Biden’s proposal for the agency into their pandemic plan, which would help prepare for the next pandemic and which they hope to move forward any way they can.

“There’s still some basic decisions that need to be made, like where it’s housed, before we actually add the language,” Murray told The Post.