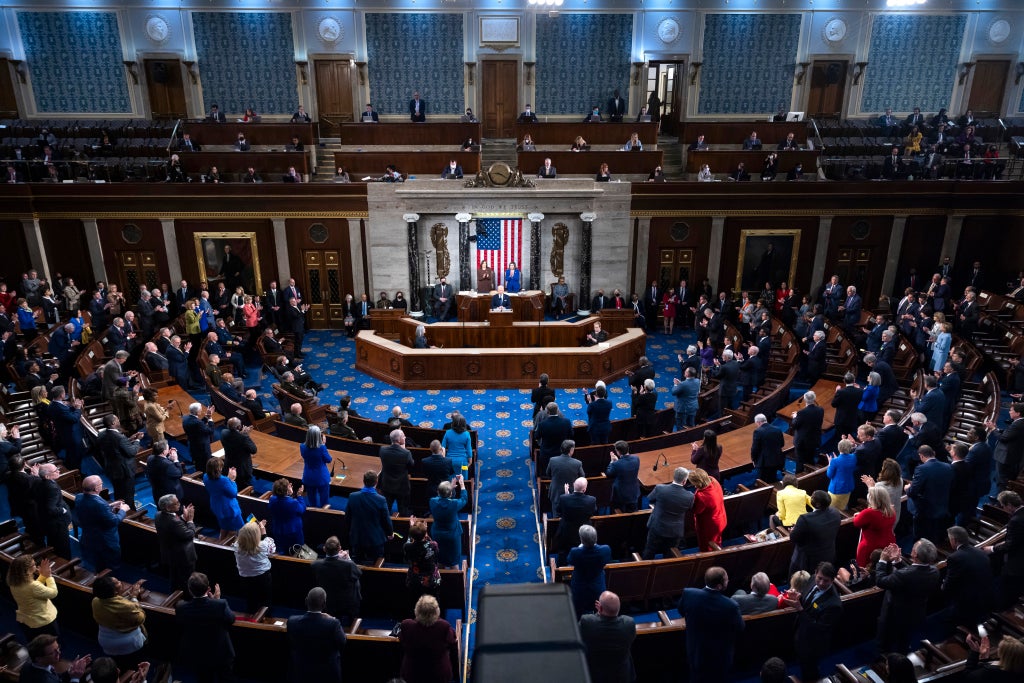 Only a little more than a week ago, President Joe Biden’s first State of the Union address was focused largely inward, looking at the economic and public health woes besetting the US But Russia’s invasion or Ukraine and the war that has ensued changed all that.

The speech and the war in Ukraine gave Biden both the platform and the urgent reason to talk about the fight between democracy and autocracy not as an abstraction but as an urgent reality.

Biden has repeatedly talked about the battle of between the values ​​of liberal democracies and autocrats like Russian President Vladimir Putin as the greatest foreign policy test facing the world.

But Russia’s invasion of Ukraine — and the surprising unity that US and European allies have shown in response — gave the president a chance to speak about the issue in a visceral way to a global audience.

“In the battle between democracy and autocracy, democracies are rising at the moment, and the world is clearly choosing the side of peace and security,” Biden said “This is a real test. It’s going to take time. So let us continue to draw inspiration from the iron will of the Ukrainian people. “

He celebrated the West for coming together on hard-hitting sanctions that are “choking off Russia’s access to technology that will sap its economic strength and weaken its military for years to come” he announced news sanctions to close off US air space to all Russian flights . and he paid tribute to Ukrainian people for “fighting back with pure courage.”

MOVE TO THE CENTER

Biden found himself caught in the middle of culture wars for much of his first year in office. With his State of the Union, the president who has made his long career in politics living in the ideological — had moments where he sought to pivot to the center.

He dismissed those on the left of his party who have advocated for reducing funding of police in the midst of national reckoning on policing in Black communities.

After months of Republicans beating him up on immigration, he allowed that “we need to secure the border and fix the immigration system.” But he also called on Republicans — and the American public — to look at the issue in a pragmatic way, alluding to the country’s worker shorter as the nation emerges for coronavirus pandemic.

“It’s not only the right thing to do — it’s the economically smart thing to do,” Biden said.

PIVOT TO PRICES AT THE PUMP

Even as he appeals to the higher ideals of democracy, Biden believes that many Americans would process the war through prices at the pump instead of geopolitical risks.

It’s a jarring contrast in priorities as Ukrainians beg the US and its allies for weapons to protect themselves, while the US and Europe are focused first and foremost on energy costs in their own economies that are generally experiencing growth instead of an existential threat.

“I’m taking robust action to make sure the pain of our sanctions is targeted at Russia’s economy — and I will use every tool at our disposal to protect American businesses and consumers,” Biden said as he announced the planned release of another 30 million barrels of oil from the US petroleum reserve. Gasoline prices are averaging $3.61 a gallon, according to AAA. But most of that increase occurred over the past year, rather than the machinations of Russia.

It’s a sign that Biden sees his own political fortunes resting on family budgets and reducing inflation, perhaps even more than a land war in Europe.

A SLOGAN PUT ON THE SHELF

Biden almost said it — the motto that disappeared with his political agenda: “Build Back Better.” Oh, BBB. West Virginia Sen. Joe Manchin, the decisive Democratic vote in the evenly split Senate, has pronounced BBB dead with no eulogy.

Biden in outlining his agenda said instead, “I call it building a better America.” So, what does that look like? It looks a lot like his prior agenda, except it’s been slimmed down.

Biden said the country has moved beyond the pandemic, even if it still needs to stay vigilant against mutations. His big argument about him is that the country can’t change its past divides, though it must address the pandemic with a united front.

I have noted that most of the country can now be mask-free. Most Americans are vaccinated and more vaccines are available if needed. Schools are open and workers can return to offices. “COVID-19 need no longer control our lives,” said Biden, echoing statements he made last July 4 when the disease similarly appeared to be in the rear view mirror.

The difference this time compared to the summer of 2020 is not only the increase in vaccinations but the lessons from the omicron and delta waves that caused infections and deaths to accelerate.

WHAT’S IN A WORD? REPETITION

The word count says a lot about where Biden’s frame of mind is right now.

His remarks include variations on the word “job” more than a dozen times as it applied to people working. Inflation netted half a dozen mentions and forms of the word “price” in terms of costs charged were mentioned 10 times. “Pandemic” was mentioned eight times and COVID-19 appeared a dozen times.

He tried to highlight partisan unity by deploying the phrase “Democrats and Republicans” three times. Russia’s invasion of Ukraine (20 mentions) supplanted China as a geopolitical rival, as China got just two mentions. And there was a clear villain: Putin was named 12 times.

Blue and yellow is the new black.

As Russian invasion of Ukraine grinds on, lawmakers showed their support for Ukrainians with their sartorial choices.

House Speaker Nancy Pelosi wore a blue suit adorned with a lapel pin of Ukraine and US flags. Rep. Eric Swalwell made do with a blue scarf.

Sen. Mitt Romney of Utah, who appeared to have a large paper Ukraine flag pinned to his suit, had a bit of wardrobe malfunction. (His Ukraine flag from him fell off as he waded through the packed aisle to make his way to his seat from him.)

Many lawmakers — and guests — also had small Ukrainian flags. In a sign of support for the Ukrainian people, the First Lady Jill Biden has an embroidered appliqué of a sunflower, the national flower of Ukraine, sewn to the sleeve of her dress near her wrist.