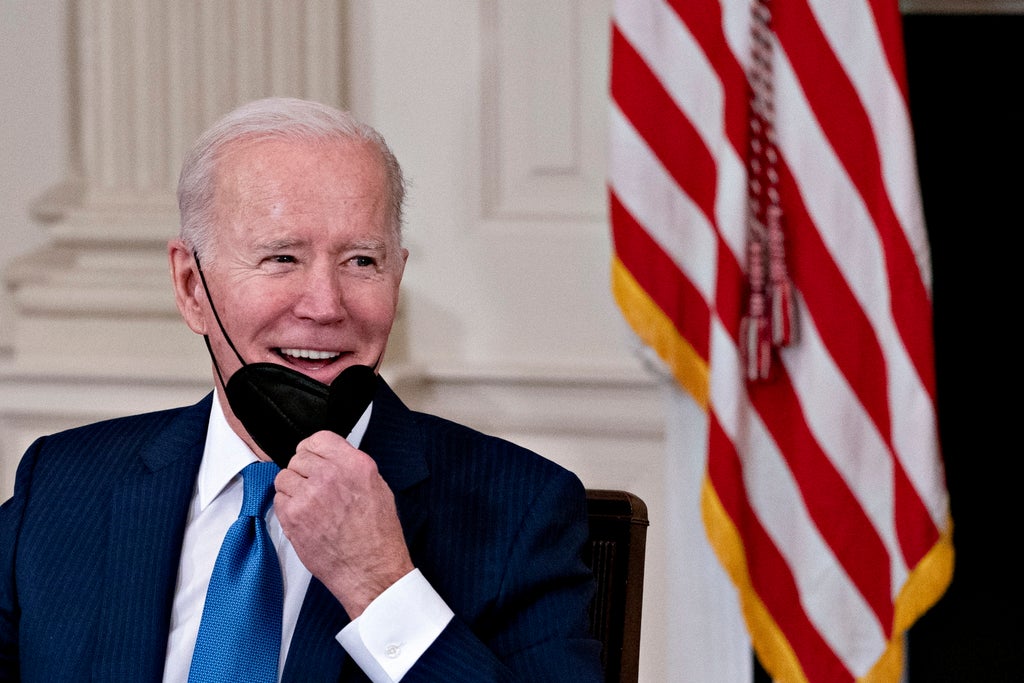 “Losing masks is probably premature,” Mr Biden told NBC’s Lester Holt on Thursday, though he also noted the “profound impact on the psyche of the American people” that the continued pandemic has taken.

On Thursday, Nevada dropped its indoor mask mandate for most places besides healthcare facilities. Meanwhile, states like Connecticut, Delaware, New Jersey, Oregon, Rhode Island, California, New York, Illinois, and Massachusetts are considering joining the many GOP and Southern states which have dropped or never had tight masking rules.

“It’s hard to say whether they are wrong,” Mr Biden added in the interview. “They set a time limit and I assume it has something to do with whether the omicron variant continues to dive.”

Still, the president, as well as the CDC director, have insisted that leaders should still be encouraging masks.

“Now is not the moment” to ditch masks, the CDC director Rochelle Walensky said earlier this week.

A sense of urgency may be on the wane when it comes to mask mandates, but Covid has hardly abated.

The worst of the omicron surge appears to be over, but average weekly cases in the US were still over 169,000 on Thursday, still higher than much of the pandemic, including the period when the vaccine wasn’t available. The only time there have been more cases has been during the worst of the recent omicron surge, and last winter’s spike in delta-drive cases.

Speaking at a recent roundtable of public health experts, Dr Georges Benjamin, executive director of the American Public Health Association, said the Biden administration had “started off really well” battling the pandemic, but, “the challenge is that this virus continues to throw us curves,” I’ve told NPR.

Experts have praised Mr Biden’s emphasis on expanding vaccine access, restoring trust in public health officials after the chaos of the Trump administration, and passing the $1.9 trillion American Rescue Plan.

Still, the president has failed to convince or reach nearly a quarter of the population, mostly Republicans, who haven’t received a single dose of the vaccine.

Still others have argued that the administration has put too much faith in vaccination alone to get us out of the pandemic, neglecting to develop strategies like widespread disease monitoring, easily available high-quality masks and Covid tests, and other mitigation strategies.

“I do think that there may have been an overemphasis on vaccination as being the easy way to solve this at the cost of testing and other mitigation strategies that we could have continued to do to reduce some of the burden that we’ve seen,” Seema Lakdawala, a University of Pittsburgh virologist, added in the NPR discussion.

Of course, there are things that are out of Mr Biden’s hands, such as the onslaught of two powerful Covid variants, each more powerful than the last, as well as America’s decentralized federal governing structure, which gives the president little influence over the decisions of states, school officials, and other drivers of public health policy in day-to-day life.