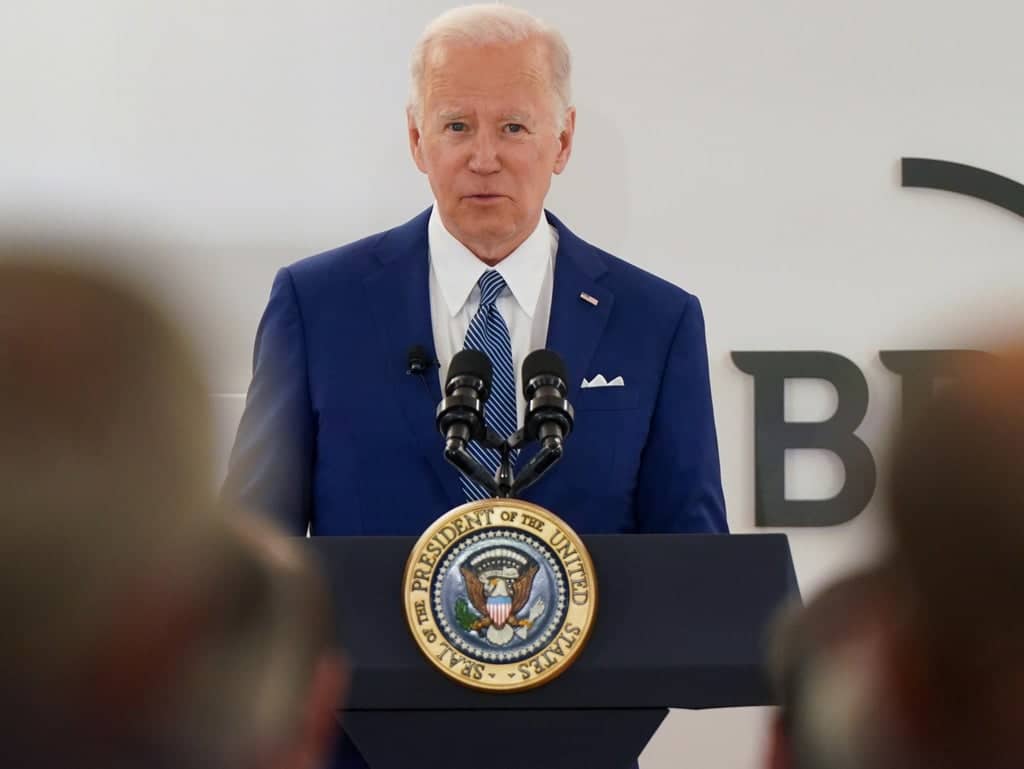 Joe Biden has inadvertently drawn the attention of conspiracy theorists with remarks he made at the end of a speech about the implications of Russia’s assault on Ukraine.

Speaking at a meeting of the Business Roundtable lobbying organisation, Mr Biden declared: “Now is a time when things are shifting. We’re going to — there’s going to be a new world order out there, and we’ve got to lead it. And we’ve got to unite the rest of the free world in doing it.”

The “new world order” conspiracy theory dates back decades, and holds that a nefarious elite led by the United Nations and other shadowy forces is planning to install a single transnational global government via the use of force – possibly with the involvement of US agencies including the Federal Emergency Management Agency, which some believe is preparing to put Americans in concentration camps.

Meanwhile, Mr Biden is planning a trip to Poland to shore up his administration’s commitment to it and other Nato allies in eastern Europe. The visit comes after the US rejected a proposal under which Poland would have supplied Ukraine with MiG-29 jets via a US airbase in Germany.

The supposed politicization of classrooms is a core Republican talking point these days, but parents at a Christian private school in California have voiced their outrage at a video of a teacher encouraging pre-school children in an anti-Biden chant.

As the Russian war in Ukraine rages and a Supreme Court nomination process proceeds, much of the right-wing commentariat remains fixed on what could charitably be called a peripheral issue: the laptop belonging to Hunter Biden that was found in a Delaware repair shop towards the end of the 2020 election.

What is the “new world order” conspiracy theory?

Joe Biden’s allusion yesterday to the “new world order” offered a shot of adrenaline to a tendency of veteran conspiracy theorists and self-proclaimed “patriots” who for decades have been convinced that the United Nations and other shadowy forces are planning to take over the US and install a transnational authoritarian global government.

Outside of the world of conspiracy theories, of course, the phrase is a perfectly mundane one. Here, Joe Sommerland explains why it nonetheless sets so many people on edge.

The vice president has lost another staffer, this time her national security adviser, Nancy McEldowney, who according to Reuters cited “pressing personal matters” as the reason for her departure.

In response, Ms Harris said Ms McEldowney had provided “invaluable counsel” and that she is grateful for her “service, her exceptional talent, deep expertise, and leadership navigating complex challenges”.

While Joe Biden is signaling that Russia’s invasion of Ukraine puts the US and the west under both a moral obligation and a serious security threat, the Pentagon has given a damning assessment of the Russian military’s performance.

Describing the invading forces as “flummoxed” and “frustrated”, spokesman John Kirby said yesterday that the Russians have failed in their major objectives at enormous cost to their own military. “When you look at what they’ve managed to do in 26 days, it’s not that impressive,” he declared.

Are chemical and biological weapons on the horizon in Ukraine?

Joe Biden yesterday warned that with his “back against the wall”, there is a “clear sign” Vladimir Putin is considering using chemical and biological weapons in Ukraine.

A Russian-led conspiracy theory about US-sponsored biolabs in Ukraine producing biological weapons has gathered support from some areas of the American right, raising concerns that any Russian attack using unconventional weapons could easily be misrepresented by the Kremlin to large audiences in the west.

The development comes as Russia faces disastrous military setbacks in the conflict, which has seen Ukraine put up a far stronger fight than expected while Russian forces suffer desertions, tactical failures and thousands of casualties.

Zaina Alibhai has this explainer on the missile and its implications.

Why Biden is heading to Poland

Joe Biden will be visiting his counterparts in Warsaw this week as part of a European tour, a chance for him to touch base with a government that finds itself just across the border from a major Russian offensive military.

Read: Biden on the world after Putin’s Ukraine invasion

Joe Biden was not, in fact, promoting the idea of ​​a single transnational world government when he addressed business leaders in Washington yesterday. Instead, he was making the point that the confluence of major crises – war, Covid-19 and the climate emergency – was an opportunity to greatly improve life for people all over the globe.

As per a White House transcript, here’s the segment of his speech that’s drawn attention:

Watch a clip of his remarks below.

First Lady Jill Biden will meet with four Ukrainian children and their families who have been brought to St Jude’s Children’s Research Hospital in Memphis, Tennessee.

The State Department worked with St Jude’s to evacuate the children from Ukraine. Secretary Antony Blinken tweeted about the airlift of these vulnerable patients.

Dr Biden will visit on Friday, the East Wing confirms.