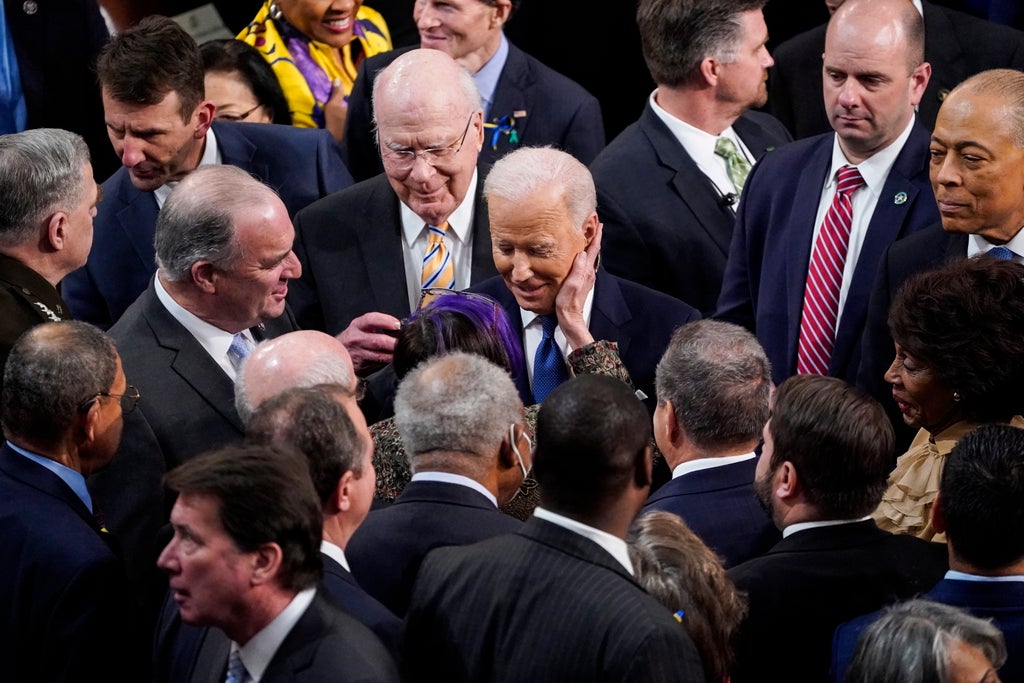 President Joe Biden focused heavily on reducing the federal deficit and combatting inflation in his State of the Union address Tuesday evening as much of the rest of his domestic agenda languishes in Congress.

Mr Biden said in January that he expected “big chunks” of Build Back Better signed into law. But those concerns took a backseat to the topic that concerns American voters the most ahead of the midterm election: inflation.

A poll from NPR, PBS NewsHour and Marist found that 38 per cent of Americans think Mr Biden should focus on inflation.

The same poll found that 56 per cent of Americans think Mr Biden’s first year was a failure and 54 per cent said that they do not think he is not fulfilling his campaign promises, while 51 per cent said they are economically worse off than they were a year ago

The first part of Mr Biden’s speech focused heavily on Russian President Vladimir Putin’s invasion of Ukraine, the United States’s support for the people of Ukraine and the measures his administration is taking to combat it. But even then, Mr Biden could not ignore the concerns that people have about rising costs.

“These steps will help blunt gas prices here at home. And I know the news about what’s happening can seem alarming,” he said.

Mr Biden was quick to highlight the rapid job growth during his administration and his success in combatting the coronavirus pandemic.

“Inflation is robbing them of the gains they might otherwise feel,” he said.

Mr Biden explained that the economy “roared back faster” than expected but that the pandemic meant businesses had difficulty hiring enough workers and that this was exacerbated by global supply chains. Some Republicans have argued that enhanced unemployment insurance discouraged workers from finding jobs and numerous Republican governors ended the unemployment insurance enhancement under the American Rescue Plan that passed last year.

“When factories close, it takes longer to make goods and get them from the warehouse to the store, and prices go up,” he said.

In turn, Mr Biden said he planned to prioritize making more products in the United States.

“And instead of relying on foreign supply chains, let’s make it in America,” he said “Economists call it ‘increasing the productive capacity of our economy.’ I call it building a better America.”

In the same respect, Mr Biden also appeared to be speaking directly to Mr Manchin, who has emphasized debt reduction and concerns about inflation.

“My plan will not only lower costs to give families a fair shot, it will lower the deficit,” he said. Similarly, he said he planned to fight fraud committed during the pandemic.

“By the end of this year, the deficit will be down to less than half what it was before I took office,” he said. “The only president ever to cut the deficit by more than one trillion dollars in a single year.”

Mr Biden also framed his plans on corporate profiteering in terms of reducing costs for families.

“When corporations don’t have to compete, their profits go up, your prices go up, and small businesses and family farmers and ranchers go under,” he said. “And as Wall Street firms take over more nursing homes, quality in those homes has gone down and costs have gone up. That ends on my watch.”

Mr Biden also spoke about lowering insulin costs and pointed to his guest Joshua Davis, who is 13 years old and has type-one diabetes.

“Drug companies will still do very well. And while we’re at it let Medicare negotiate lower prices for prescription drugs, like the VA already does,” he said. Similarly, Mr Biden also mentioned the expanded child tax credit, which lasted until the end of last year and would have been extended under Build Back Better but to which Mr Manchin objected.

Mr Biden also urged Congress to pass the minimum wage and also was quick to highlight how the Centers for Disease Control & Prevention had loosened masking restrictions for many Americans.

“It’s time for Americans to get back to work and fill our great downtowns again. People working from home can feel safe to begin to return to the office,” he said. “Our schools are open. Let’s keep it that way. Our kids need to be in school.”