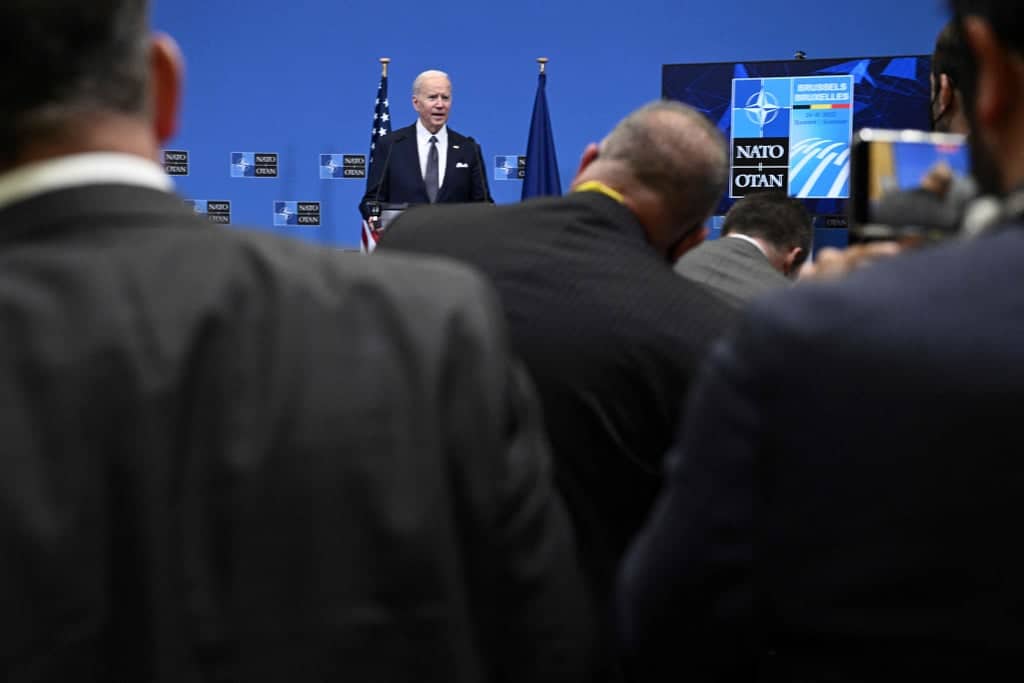 Addressing reporters at a Nato conference in Brussels on Thursday, Joe Biden said he had no concerns about a potential face-off against his 2020 Republican opponent, Donald Trump.

A reporter for the German magazine Der Spiegel pointed out that there was a presidential election – to which Mr Biden quipped “you’re kidding?”

After a small shuffle of laughter, the reporter continued and posed, without stating the former president’s current name, what the Biden administration is doing now to prevent all the work he’s doing here with Nato, at the alliance’s headquarters, from “coming undone two years from now”.

Before immediately addressing the reporter’s question, Mr Biden began with a preamble to explain his motivations for running in 2020.

“I wasn’t gonna run again, and I mean that sincerely,” said Mr Biden, who before 2020 had made two failed attempts at the presidency.

What motivated him, he said, were the scenes from the 2017 Charlottesville rally, an alt-right protest that he evoked during the Q&A portion of the summit, which he found had a haunting resemblance to Nazi Germany.

“I saw those folks… carrying torches and carrying Nazi banners, literally singing the same vile rhyme that they used in Germany in the early 30s.”

He then went on to address his 2020 opponent’s response to the riot, which left one woman dead, and, in a similar fashion to the German reporter, answered without ever actually saying Mr Trump’s name.

“When the gentleman you mentioned was asked what he thought,” Mr Biden began, “he said they were very good people on both sides.”

That, he said, was the moment he decided to make his run for president official.

Before circling back to answering the reporter’s original question, about whether or not he or Nato alliances were doing anything today to ensure that Mr Trump, or a candidate like him, won’t undo all the foreign policy decisions made during the Biden administration, he acknowledged that, while the election was a long way off, the motivation for asking about it was “not an illogical one”.

President Biden, who will be 82 by next presidential election, has indicated that he intends to run in 2024, should he continue to be in good health. For his part, Mr Trump has repeatedly hinted that he will run again but has refused to confirm whether he will or not.

At the close of the conference, the US president made sure to reassure reporters in the pool that he had no fear of a potential match-up against the man whose name he wouldn’t even acknowledge during the briefing.

“The next election, I’d be very fortunate if I had the same man running against me,” the US president said before walking off the stage and closing the question section of the Nato conference.

Thursday’s meetings were arranged to coordinate with Nato allies on military assistance for Ukraine, new sanctions on Russia, and the boosting of defenses in Eastern Europe.

Further meetings were scheduled for Thursday afternoon including with European Council President Charles Michel after which the president will address the council’s summit on the Ukraine war.

See also  Donda 2 live updates: When does Kanye West's album drop and how can I stream it?

On Friday, Mr Biden will head to Poland where there is still a possibility the US president could arrange a visit to the Ukraine border, though there is no confirmation on that visit from the White House.