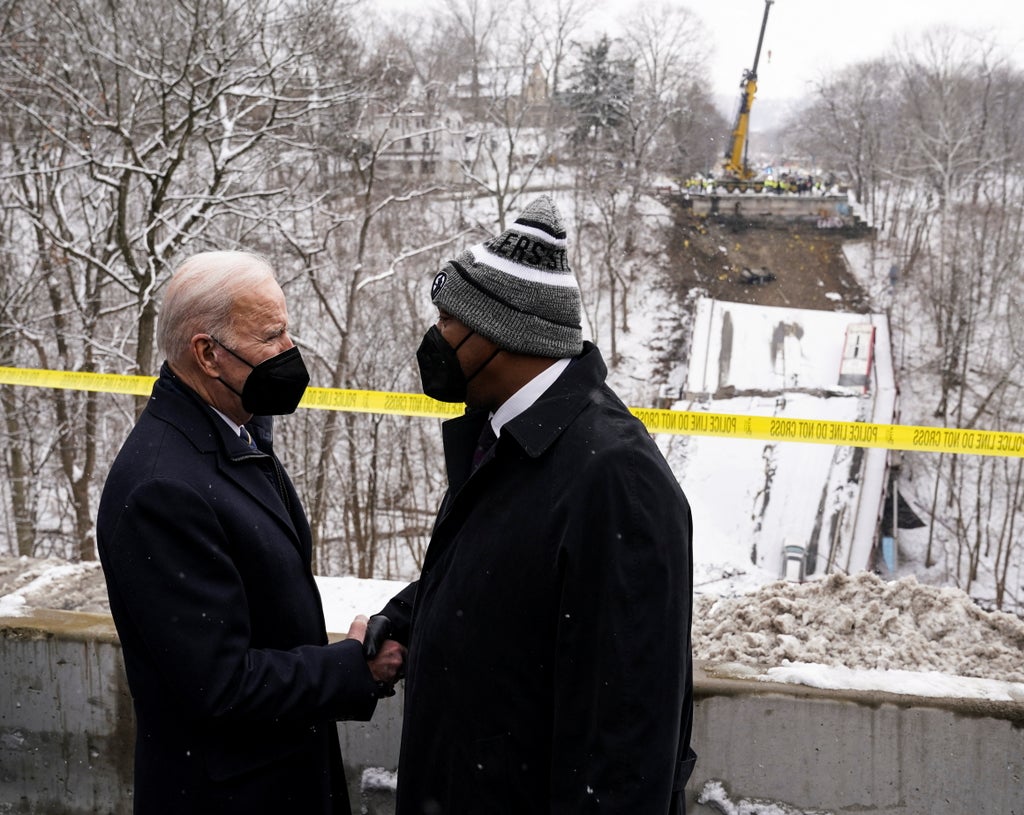 President Joe Biden has visited the scene of a collapsed bridge in Pittsburgh, which injured at least 10 people on Friday morning.

The president was already scheduled to visit Pittsburgh in the afternoon and speak at Carnegie Mellon University to discuss jobs, the nation’s economy, supply chains and tout his bipartisan infrastructure law.

In his remarks, Mr Biden emphasized why investment in infrastructure is needed, saying: “We don’t need headlines saying that someone was killed when the next bridge collapses… We saw today, when a bridge is in disrepair, it literally can threaten lives … We’re going to rebuild that bridge.”

He noted that there are another 3,300 bridges in Pennsylvania, some just as old and decrepit as the one that collapsed, but the infrastructure law is now in place to begin the work of repairing or replacing them.

Earlier at the site of the disaster, meeting with first responders and local lawmakers, the president noted the scale of the challenge of repairing America’s infrastructure, both just in the state and across the nation.

“I’ve been coming to Pittsburgh a long time, and as a former Pennsylvanian, I didn’t realize there are literally more bridges in Pittsburgh than in any other city in the world. Did you know? More than in Venice.”

“And we’re going to — they’re going to fix them all. Not a joke. This is going to be a gigantic change. And there’s 43,000 nationwide. And we’re sending the money.”

Today’s remarks on the economy and infrastructure were originally scheduled in Pittsburgh because, as a one-time steel town, the city has worked hard to reorient its economy over the decades.

At Carnegie Mellon Mr Biden spoke at Mill 19, a manufacturing and research facility on the site of a former steel mill.

He said: “Instead of people saying you’re a city without a future I believe you’re a city of the future. You have some of the most innovative businesses, you have a future with some breathing room. We need to ease the burden that is placed on you, you deserve that.”

“We need to ease the burden on working families… That’s what my Build Back Better plan is all about,” said the president. “That’s why those major corporations came to the White House asking to see me, to tell me they supported Build Back Better even though it was going to increase their taxes.”

When news of the bridge collapse broke early this morning, White House Press Secretary Jen Psaki said Mr Biden had been briefed, but that the trip was still on.

“The President will proceed with trip planned for today and will stay in touch with officials on the ground about additional assistance we can provide,” she tweeted.

Pittsburgh Public Safety said that the collapse happened at roughly 6.50 am and that a gas line was cut after people could smell natural gas.

Pittsburgh Mayor Ed Gainey mentioned the necessity of the bipartisan law signed in November, saying the “bipartisan infrastructure law is critical to southwest Pennsylvania and the city of Pittsburgh. We know we have bridges that we need to take care of.”

See also  Charles of England, positive for coronavirus for the second time | People