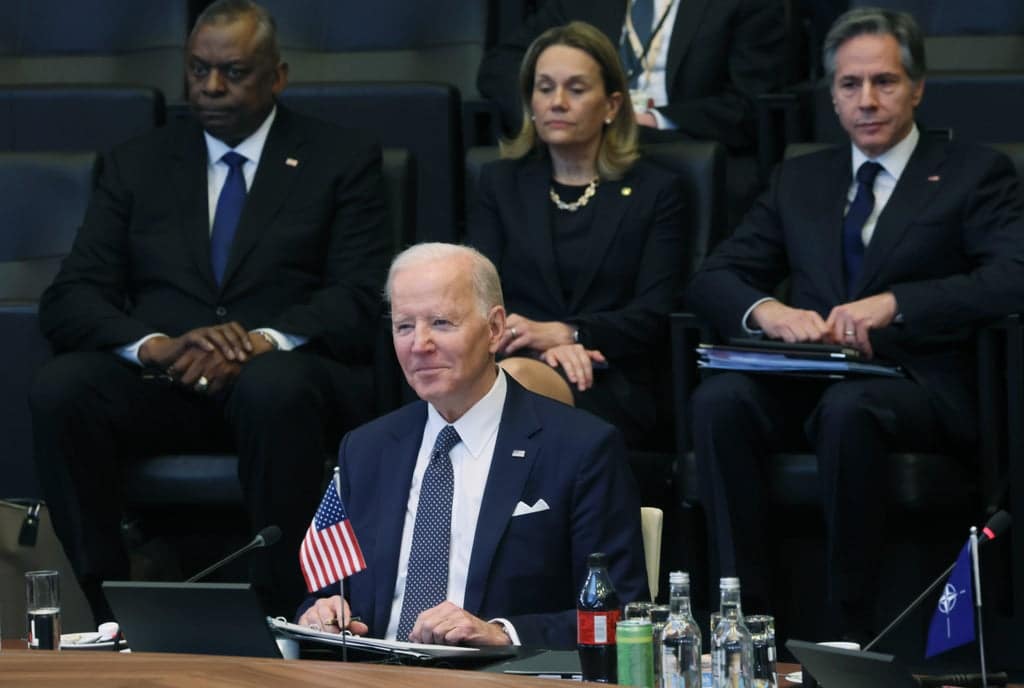 The majority of Americans want Joe Biden to take a tougher stance when responding to Russia’s invasion of Ukraine according to a new poll by the Associated Press and NORC Public Affairs Research.

Released on Thursday, the results show 56 per cent of respondents say they believe the president’s response to Vladimir Putin’s attack on Ukraine has not been tough enough, while only 36 per cent think it has been about right, and six per cent said it has been too tough.

According to the poll, the president has an approval rating of 43 per cent and a similar number approves of his handling of the relationship with Russia — though neither of these figures has moved significantly during the month-long war when compared to an AP-NORC poll conducted in the days before the attack.

While Russia faces some of the most extreme sanctions ever rolled out by the US and its allies, it nevertheless continues to attack Ukrainian cities with air strikes and artillery, even as its ground forces have failed to make further gains on the battlefield.

As President Biden attends the Nato, G7 and EU summits in Brussels, only a quarter of Americans are very confident that he has the ability to handle a crisis, promote US standing in the world, or effectively manage the US military, according to the poll , but the majority have at least some confidence that he does.

Even among Democrats, Mr Biden faces pressure to do more. As many as 43 per cent say he hasn’t been tough enough, while 53 percent say his response to him has been “about right”.

“I understand he’s between a rock and a hard place,” said Rachel Collins, a 41-year-old Democrat from Chicago. “It just feels like Putin’s not going to stop at Ukraine.”

“How many years are we gonna watch this happen and then have to step in anyway?” she added. “It just feels inevitable and, in the meantime, we’re just watching all these people suffer.”

Support for a greater US role has grown since February, from 26 per cent to 40 per cent, but the poll shows close to half of Americans are “extremely” or “very” concerned about being drawn into war with Russia.

There are particular fears about the potential for Putin to deploy chemical, biological, or tactical nuclear weapons, which would significantly escalate the conflict and could trigger a response form Nato.

Regarding ground forces, Mr Biden has repeatedly said that he will not send American troops to Ukraine, though some have been deployed to neighboring Nato countries. The alliance this morning announced a significant shoring up of defense forces on its eastern flank, with new battlegroups in Romania, Slovakia, Hungary, and Bulgaria.

“I think that he’s doing the right thing and being cautious, but it’s really hard when you’re watching and reading about these stories day by day,” Ms Collins said. “More aggressive at where we are means putting troops on the ground, and I don’t necessarily know if that’s the answer either.”

“Then, you know, there’ll be people saying ‘why are we putting troops in there,’” she added.

While Republicans are less likely than Democrats to support the US having a major role in Russia’s war, most also say they think Biden’s response has not been tough enough.

Mr Stoddard, 76, would prefer somebody like former President Donald Trump over Mr Biden to tell Putin “that Putin may have a red button but the United States’ red button is bigger,” he said.

Stoddard thinks there’s more Biden could be doing to strengthen sanctions and support Ukraine militarily, including transferring Polish MiG fighter jets to Ukraine from a Nato air base in Germany, which the Pentagon declined to do earlier in March.

The administration has said it is determined to avoid further action that could be seen as escalatory by Putin.

Majorities of Republicans and Democrats alike said they approve of economic sanctions imposed on Russia in general and on the ban on Russian oil in particular, according to the poll.

However, while 77 per cent of Democrats approve of how Mr Biden is handling the relationship with Russia, just 12 per cent of Republicans do.

While some Democrats acknowledged thinking that Biden could be doing more, many are confident in him to do what’s best for the country.

“I’m sure there’s more that he could do,” said Chris Hollander, a research assistant in Denver. “But as far as being tough, he’s not a pushover.”

Listening to the intelligence community and getting Nato countries to work together reflect Mr Biden’s “behind the scenes” leadership, Mr Hollander, 33, said. “I think he’s threading a needle.”

With reporting from the Associated Press