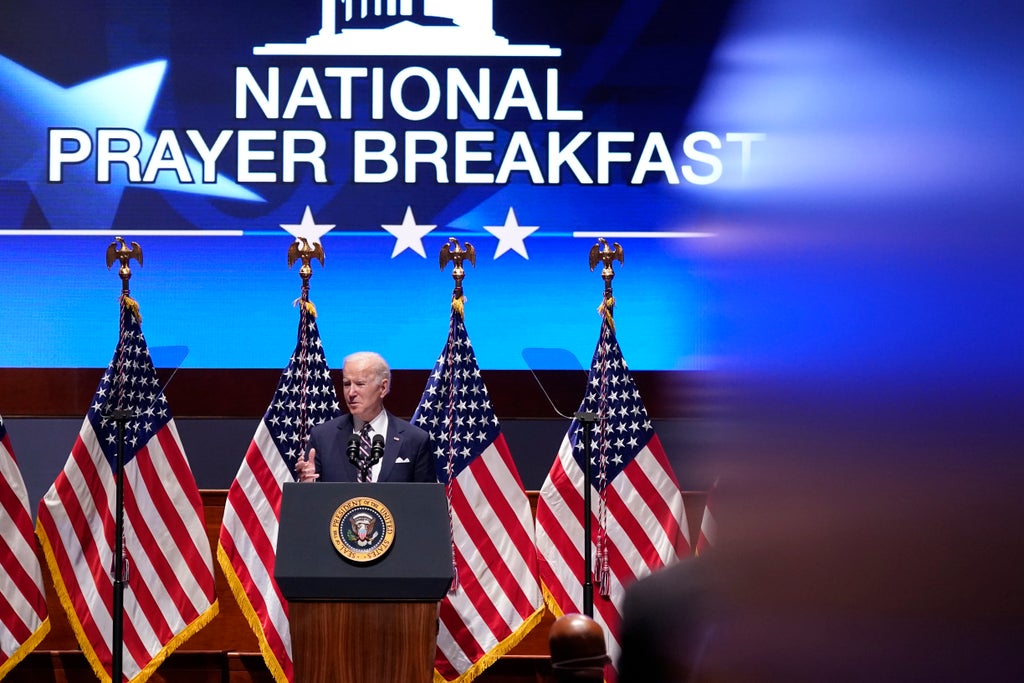 For the second year in a row, the President of the United States delivered a speech to an annual interfaith gathering without discussing television ratings, bragging about the stock market, boasting of partisan political achievements or attacking perceived political enemies.

When President Joe Biden arrived at the 70th annual National Prayer Breakfast on Thursday, he certainly had something to boast about. The night before, he had watched in the White House situation room as US soldiers conducted a successful operation to eliminate Isis leader Abu Ibrahim al-Hashimi al-Qurayshi, the terrorist leader responsible for the group’s 2014 genocide against the Yazidi people in Northwestern Iraq.

But Mr Biden did not speak of his administration’s new counterterrorism success story. He did not insult any of the members of Congress who were present, and he did not invoke hot-button issues such as abortion or LGBT+ rights.

Instead, the 46th president — just the second Roman Catholic to serve as America’s chief executive — spent just over 20 minutes holding forth on matters far more germane to the annual confab, which is hosted by members of congress and organized by the Fellowship Foundation, a Christian nonprofit group.

Opening his remarks, Mr Biden noted that the Thursday event was taking place on what would have been the 53rd birthday of his late son Beau Biden and credited his family and friends for helping him endure a series of personal tragedies, including his eldest son’s death from cancer, and before that the deaths of his first wife, Neilia, and his daughter Naomi in a car crash just after his election to the Senate in 1972. But he noted that many people suffering through grief don’t have the support network he has enjoy.

“We’ve all gone through really difficult times, every one of you out there one way or another. I had an overwhelming advantage. I mean it honestly. I had a family that was there for me every single solitary moment, so I don’t deserve this credit for enduring,” he said.

Two of the lawmakers present for his remarks had suffered similar losses. Georgia Representative Lucy McBath had in part built her rise in politics on pushing for stronger gun laws after the death of her teenage son Jordan Davis at the hands of a gunman who’d objected to her loud music at a petrol station. And South Dakota Senator Mike Rounds recently buried his wife Jean, who passed late last year after a battle with cancer.

“Mike, I know it’s been three months to this day that you lost Jean to cancer. So, you know – you know of which I speak. And it’s like losing a piece of your soul,” he said. “Congresswoman McBath, just like your precious son Jordan – he’s always going to be with you, for real.

“And for everyone out there who has lost a piece of their soul, they’re always with you. And all through the pain… if you can find purpose, find purpose. Purpose of a life that makes you worthy in their eyes and what they expect of you,” he said.

He then turned the gathering’s attention to the absence of one member of congress, New Mexico Senator Ben Ray Lujan, whose office recently announced that he’d suffered a stroke and would be absent from Washington while he recovers.

“I think, from what I understand, he’s going to be okay and be back with us in the not-too-distant future. But we pray for a safe recovery,” Mr Biden said.

He also spoke approvingly of one of his major political adversaries, Senate minority leader Mitch McConnell.

Addressing the Kentucky Republican, the president drew laughter from the crowd with a quip: “I don’t want to hurt your reputation, but we really are friends.

“You’re a man… of your word, and you’re a man of honor. Thank you for being my friend,” Mr Biden added.

Mr Biden’s meditations on grief and affirmations of friendship with members of the opposite party were a far cry from the subject matter covered in the quartet of addresses delivered to previous prayer breakfasts by his predecessor, Donald Trump, who made his first appearance at the annual event just weeks after he was sworn in as the 45th president of the United States.

That day, the man who would become the only American president thus far to incite a riot in hopes of preventing Congress from certifying his successor’s victory boasted of the success he’d had as host of the NBC reality show The Apprentice and complained about the state the program was in under his replacement, former California governor Arnold Schwarzenegger.

“We had tremendous success on The Apprentice. And when I ran for president, I had to leave the show. That’s when I knew for sure that I was doing it. And they hired a big, big movie star, Arnold Schwarzenegger, to take my place. And we know how that turned out — the ratings went down the tubes,” he said.

And because he was at a prayer breakfast, he added: “I want to just pray for Arnold if we can, for those ratings, OK?”

That moment of bizarre presidential oratory was perhaps the high point of Mr Trump’s addresses to the annual gathering.

Three years later, Mr Trump attended the 2020 event on the day after every GOP senator — save for Utah’s Mitt Romney — voted to acquit him in the first of his two impeachment trials.

That day, Mr Trump started to air his grievances within the first two minutes of his remarks, just after a passage about how the yearly event was a way for Americans to “come together as one nation, blessed to live in freedom and grateful to worship in peace”.

“As everybody knows, my family, our great country and your President, have been put through a terrible order by some very dishonest and corrupt people. They have done everything possible to destroy us. And by so doing, very badly hurt our nation. They know what they are doing is wrong, but they put themselves far ahead of our great country,” he said.