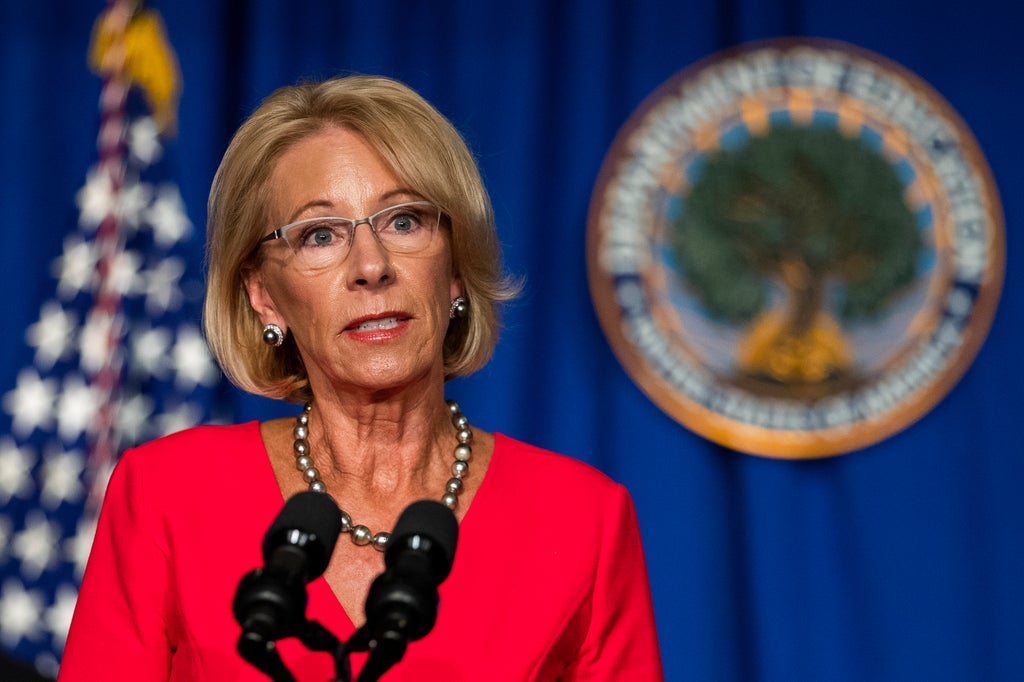 Critics like the proposed scholarship funds to vouchers and say they would be unconstitutional due to the state’s ban on public assistance for private schools.

DeVos, a longtime school choice advocate whose family has given $400,000 to the Let MI Kids Learn ballot committee, encouraged residents to support the effort. She contended it would withstand court challenges because the contributions — for which corporate and individual donors would get an equivalent income tax credit — would go to scholarship-granting organizations and “never become state money.”

“Parents don’t have to send their kids to schools that don’t care what mom and dad think. By signing these petitions, we can help every child have equal access to a world-class education — no matter if it’s public, private, charter, home, pod, dual-enrolled, online, earn and learn, tutor, after-school, extracurricular or any combination of the above,” DeVos, the education secretary during President Donald Trump’s administration, said during a virtual event to kick off petition gathering by volunteers. Paid circulators have been in the field since December.

The group needs about 340,000 valid voter signatures to send each of two initiatives to the Republican-led Legislature. Lawmakers then could enact the measures despite Democratic Gov. Gretchen Whitmer’s veto of identical bills in November.

DeVos helped lead a 2000 ballot measure — resoundingly rejected by voters — that would have required poorly performing school districts to offer vouchers for students to use at private schools.

Whitmer, who is up for reelection, has said the latest proposal would cut state revenue by as much as $500 million in the first year and make private schools “tax shelters for the wealthy.” Noting that a high percentage of Michigan’s charter schools are run by for-profit entities and citing low reading scores, she has called the movement to privatize education a “catastrophic failure.”

“This is an anti-public education effort that will take funding away from schools during a teacher shortage and will be used to give tax breaks to DeVos and her allies,” said Lonnie Scott, executive director of the liberal advocacy group Progress Michigan.

DeVos said it is “ridiculous” to suggest the plan would benefit the wealthy.

“This is a mechanism for individuals to redirect a portion of their tax bill, whether individual or corporate, to directly help students that need the help the most,” she said.

Let MI Kids Learn had taken in $1.7 million as of Dec. 31, including $800,000 from a Washington, DC-based group called Get Families Back to Work — which shares an address with the Republican Governors Association — and $475,000 from the conservative State Government Leadership Foundation.

Under the proposal, K-12 students would be for scholarships if their family income is no more than double the cutoff to receive free or reduced-priced lunch — $98,050 for a family of four now — or if they have a disability or are in foster care. Nearly 1 million, or two-thirds, of schoolchildren could qualify.

Students attending private schools could get up to 90% of the state’s minimum base per-pupil funding, which equates to $7,830 this year. Those in households with incomes at 100% to 200% of the free and reduced-lunch program threshold would receive less on a sliding scale.

Children enrolled in public schools could get a maximum of $500 per year, or $1,100 if they have a disability.