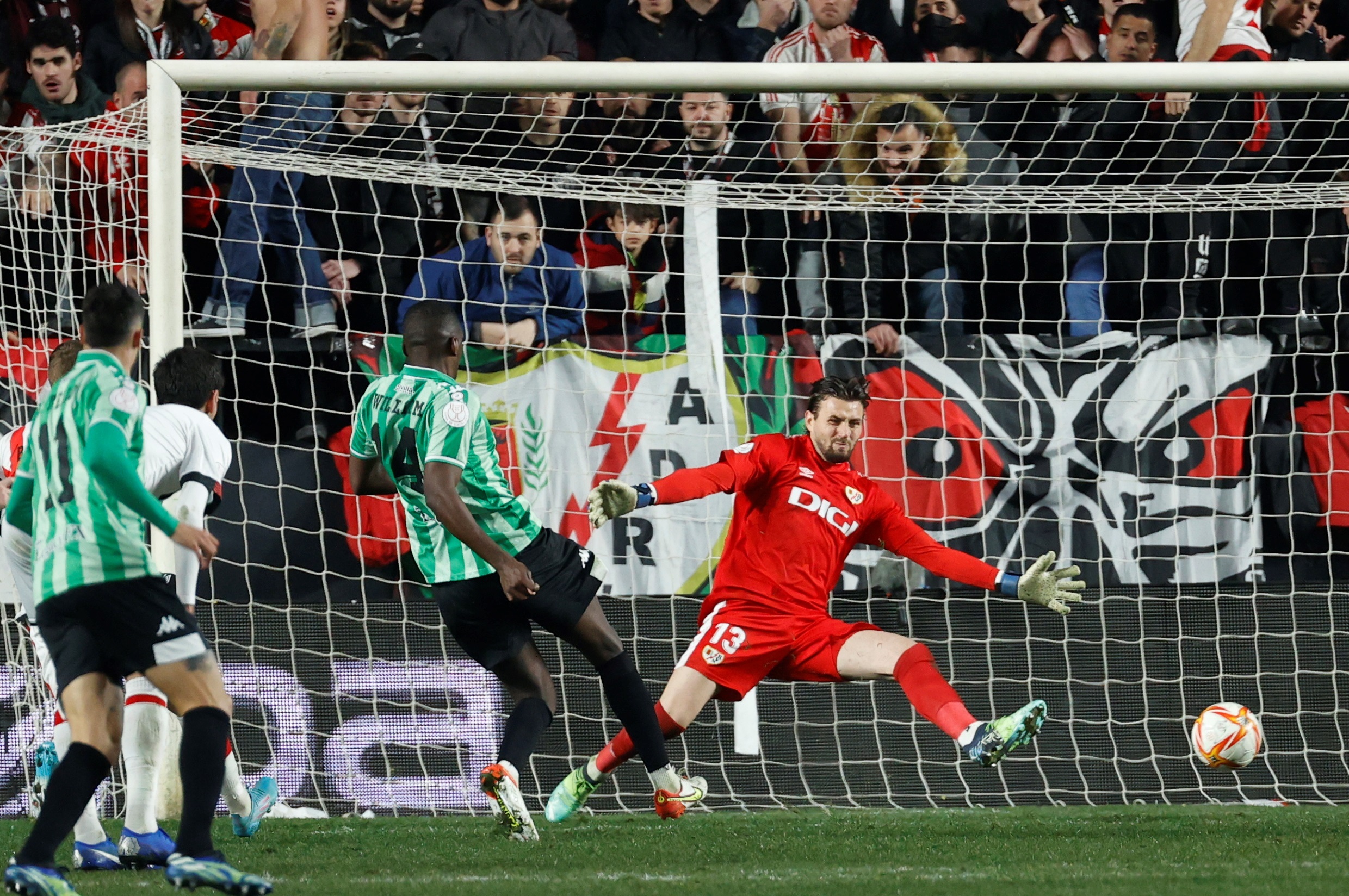 The illusion of reaching the Cup final for the first time in its history adorned Vallecas. Comanche territory for many visitors this course that ended up conquered by Betis and an imposing William Carvalho, owner and lord of the game by power and his expertise to win the duel with a monumental goal. In such a neighborhood setting, his street goal was the culmination of a memorable performance. A delicacy as cold as it is harmful. A tunnel to Catena in the heart of the box and a fine, soft touch on Dimitrievski’s exit. Betis won in the first leg, overcoming the cyclone that Rayo wanted to be and the early riser goal that conceded.

With the neighborhood overturned and on fire before the historic event, Rayo emerged groundbreaking and on the run. Álvaro García’s early goal attested to this. Balliu’s ride had the power of an obstacle to jump over Álex Moreno’s entry. If the gallop was devastating, the pass was clinical. The Albanian looked up and put down a poisoned banana. Álvaro García’s trickery to win Sabaly’s back let the Senegalese know that he was stepping on Vallecas. Five minutes had not passed and Rayo had made it clear to Betis that they wanted to run. With Trejo pressing the accelerator of technique and vision. On the left, another ball to Fran García ended in another thread similar to that of Balliu, who this time did not find a finisher. Vallecas burned before the staging of his team. Brave and upright, showing why her transitions are the talk of the First. Boosted by the lines of that pattern of play that Iraola has imposed so in keeping with the identity of the neighbourhood, Rayo distressed Betis with such an explosive start.

Pellegrini’s team showed up with the pandemic withdrawal of Canales and it took a quarter of an hour to get the air out of the game. The Cantabrian midfielder is what Trejo is for Rayo. Without the great reference of him, Betis understood that it was convenient for him to lower the game of revolutions. It grew from William Carvalho. The Portuguese midfielder is a horse that this course has been tempered with the ball. He first imposed his physique so that the Lightning no longer progressed in speed and then began to make the distribution more fluid. The game was his by presence and decision. He put a 40-meter ball to Juanmi that broke the daring local forward defense that used to live on the wire. The picadita, before the astonished Dimitrievski, was not up to the prodigious control of Juanmi and did not take the door.

Fekir, Ruibal and above all Borja Iglesias joined the green-and-white flood. The striker began to give thread to the game of his team in the last meters, which until then died in the local area. A download here, a ball held there and a goal that explained how a striker looks for life. From a heel cut hiding the ball and another dance she cleaned Óscar Valentín and Fran García. In the crescent the goal was opened and he opted for a tight shot that Dimitrievski’s hard low flight did not stop.

Borja Iglesias for everything

The goal ended up shutting down Iraola’s team and finalizing the handling of the game that Betis had won. Rayo tried it without giving up his attempts to hurt with vertigo, but William Carvalho was joined by Guido as a dike. With a penetration by Ruibal and the subsequent shot by Borja Iglesias, Betis went into the break with the feeling of having tamed a team that came out to bite them.

And with those same intentions, Rayo appeared at the restart. Álvaro García assumed his role as a troublemaker winger to give his team the incentive. The starting scenario was repeated. Lightning at full speed, Betis to tame it. And he succeeded, again with Carvalho and Borja Iglesias as decisive pieces. The striker’s match had everything that can be asked of a battering ram of his characteristics. He marked territory in the duels with Mario Suárez and Catena and made them suffer when he left the area.

Carvalho’s was a firework in his goal. The play was born from a quick free kick that Borja Iglesias held until Tello appeared on the left side. The low center of this fell to the Portuguese midfielder. He broke all the laws for a footballer of his stature. He stopped time in the area like a sibylline playmaker to go through Catena with a school pipe. Alone against Dimitrievski, he executed with the coldness of a nine. Inside and in the corner. The taming that he did of Rayo and the game was culminated with that work that leaves Betis one step away from the final. Although the rule that goals in the opposite field are no longer worth double and Rayo’s courage do not guarantee success.