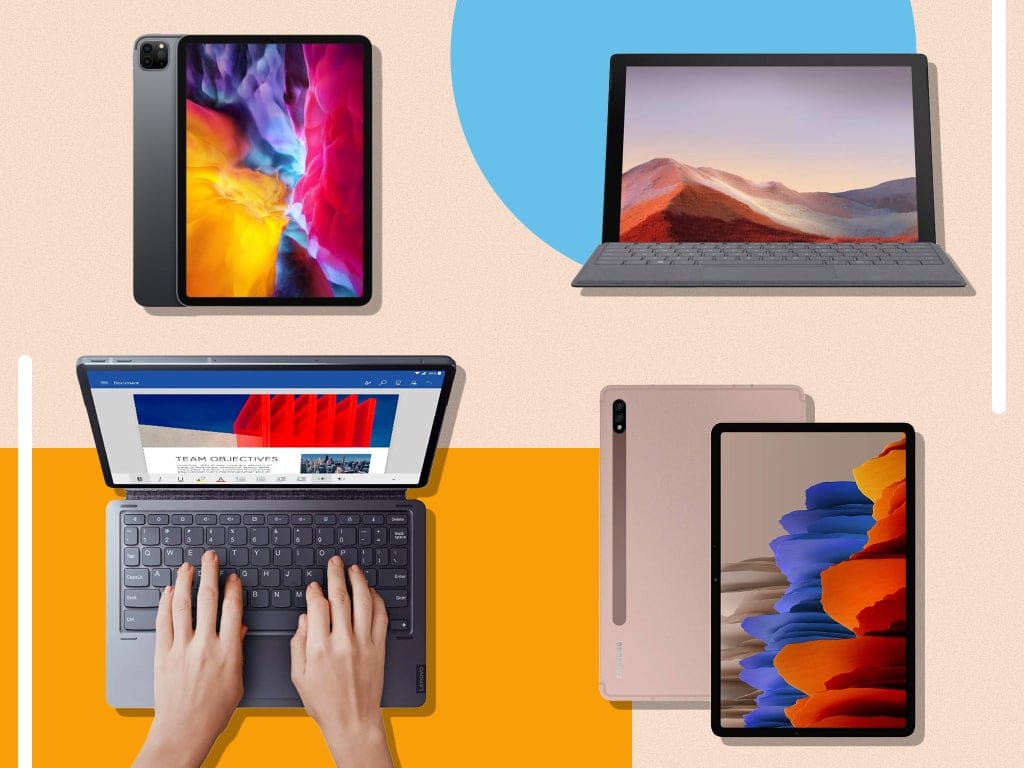 For years now, tech firms like Apple, Microsoft and Samsung have told us that the future of computing is tablets instead of laptops.

These companies produce tablets with a broad range of screen sizes, features and prices. Some can be bought with detachable keyboards, others have convenient kickstands, and many work with digital styluses, for help in unleashing your inner artist.

Tablets are often lighter, thinner and generally more portable and convenient than a laptop, with a broader price range and smartphone-based operating systems to make them easy enough for anyone to use.

When thinking of tablet computers, it’s easy to jump straight into the Apple Store and pick up an iPad. And while, yes, the iPad range is larger than ever, with prices stretching from just £479 for the iPad mini (Apple.com), all the way up to £2,149 for a fully-loaded 12.9in iPad pro (Apple.com ), there are plenty of alternatives out there, too.

Companies like Lenovo, Samsung and Microsoft all offer a range of tablets to choose from. If you don’t own any Apple devices, and aren’t in the company’s ecosystem, then looking at an alternative manufacturer can be a great idea – and potentially save you some money, too.

The best tablet deals for March 2022 in the UK are:

See also  I tried everything for my hormonal acne so I went to a dermatologist for answers.

Our tester enjoyed the “tremendous” looks of the 4th generation iPad air, which landed a spot in our best tablets round-up. Putting looks aside though, it works with the Apple pencil and magic keyboard which means it can transform into a “decent laptop substitute” too.

In our more in-depth review, our tester was pleased with the A14 chip, which ensured the air was “super speedy to navigate around and can happily handle processor-intensive apps and multitasking.” And if you’re after a tablet that will last all day, the battery life on this one is excellent.

There’s a modest £43 off the 128GB version of the latest iPad pro at Currys, which should appeal to anyone not willing to shell out almost two grand for the 2TB model featured above. Similar savings can be found on the 256GB and 512GB models if you need some extra space, but we’re big fans of spending less on on-device storage and more on cloud storage, especially if you’ve got fast wi-fi.

You can choose between a silver-grey or gray iPad pro at Currys. Both colourways offering slightly different discounts, so be sure to check out both before you add the tablet to your basket.

The Galaxy tab A series is Samsung’s range of budget-friendly tablets, and if you’re simply after a portable screen so you can watch your YouTube videos in the bathtub we can’t recommend them highly enough. The A8 is the latest in this series of affordable Android tablets, but it has quality where it counts. Samsung’s saved money by skimping on storage and RAM (which you don’t need for streaming) but focused on build quality, a long battery life, top security specs and proper stereo speakers.

The 4G version of Huawei’s flagship tablet has dropped in price by £150. This is a stylish device with a premium design and a class-leading battery life. Our reviewer did note however, that it lacks some of the more useful apps you might find on the iPad pro. For everyday use and entertainment however, it’s a brilliant piece of hardware with a luscious, high-resolution screen.

The Surface pro 7 has a large 12.3in display, is powered by a desktop-grade Intel Core i3 processor and runs Windows 11. A clever kickstand on the back flips out to hold the surface at various angles while you want to work or watch a video and, unlike many other tablets, the Microsoft Surface pro 7 has a range of ports for easily connecting USB-A and USB-C devices.

Read our review of the Microsoft Surface pro 8

Here’s an almost £150 saving on the Surface pro 8 tablet by Microsoft. This particular version of the three-in-one machine is powered by an Intel Core i5 processor with 8GB of RAM and 128GB of storage. It’s the latest-generation of Surface pro, which arrived in 2021, and can work as both a laptop and a tablet when connected to an optional keyboard, which also doubles as a folding protective case.

Read our review of the Microsoft Surface pro 8

For the latest discounts on tablets and other tech offers, try the links below:

Looking for more insight? Read our guide to the best tablets you can buy in 2022