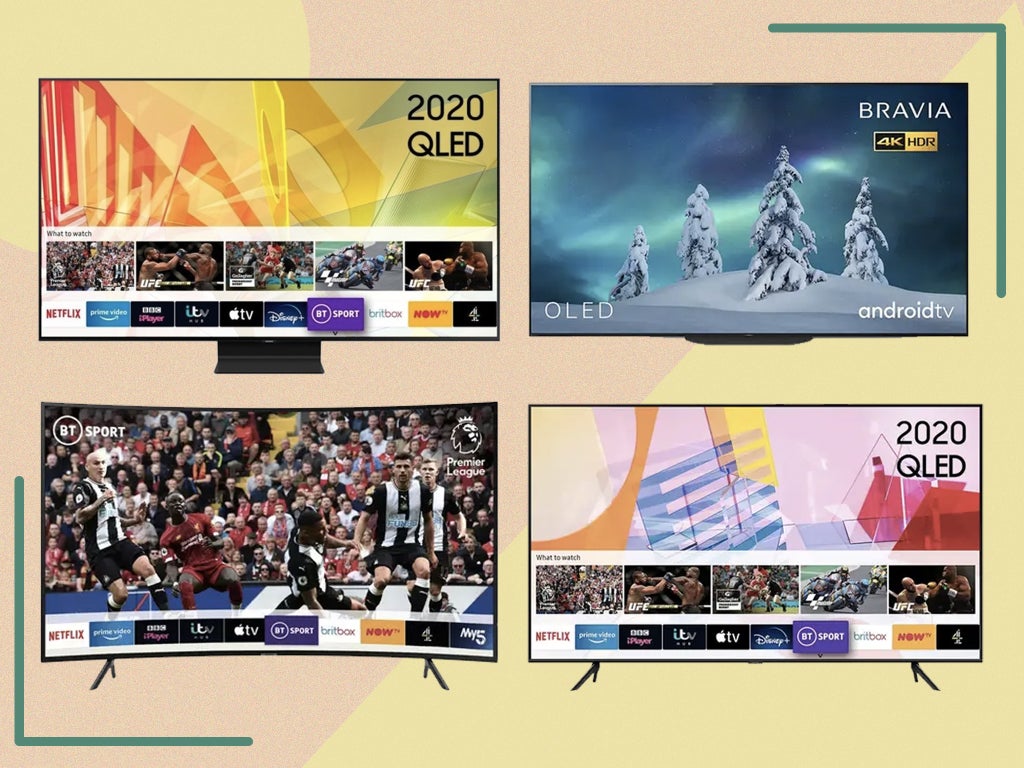 Considering a TV upgrade? Whether you’re after a wider screen or sharper picture quality, we’ve pulled together some of the best discounts on big-brand tells this February.

If you’re not quite sure which type of set is right for you, keep in mind that bigger doesn’t always mean better. You can find great bargains on 1080p (or Full HD) televisions, but while that resolution will be supported for years to come, 4K displays (or Ultra HD) are now becoming standard. They’re also cheaper than you might think – you can find decent 4K televisions for well under £1,000.

OLED and QLED TVs are at the cutting edge, but they’re expensive. LCD (also called LED, confusingly) is the entry-level panel technology, but don’t let that fool you into thinking that means low quality. The best LCD TVs look far better than the cheapest OLED TVs.

All of the TVs in our list are 4K. You can buy 8K televisions, which do look noticeably sharper on very large sets, but the technology is in its infancy and still exorbitantly expensive. There are also currently no broadcasts in 8K, so you won’t gain any additional fidelity while watching Coronation Street. Most screens also offer high dynamic range (HDR), which enables a TV to show detail in dark shadows and bright highlights at the same time.

Whether you’re after a bargain 55in TV for the family or a supersize glossy 75in model to stream your favorite shows in all their glory, here’s our pick of the top TV offers you can snap up this month.

The best TV deals for February 2022 in the UK are:

Best 75in TV deals in February

If you want a truly massive smart ultra-HD TV set, then this model from Samsung could be the one for you. It’s powered by the company’s crystal 4K processor, which upscales everything you’re watching. There’s HDR, powered by HDR10+; adaptive sound, which adjusts the audio in every scene; and gaming smarts, like the “motion xcelerator” feature, which adapts the picture to match the speed of the game.

Best 65in TV deals in February

The LG OLED A1 6LA is the entry-level version of the brand’s top-flight C1 set, and right now it’s the cheapest it’s ever been. A step above LCD/LED screens, OLED technology offers per-pixel illumination – which looks more similar to a phone screen than a traditional TV screen – and so can achieve vastly improved contrast, color and definition. The A1 series is the most affordable OLED that LG makes, and with nearly a grand off it’s one of the best TV deals you’ll find this February.

There’s an impressive £800 off this 65in Sony Bravia. The 4K OLED screen is less than a year old and is powered by Google’s smart TV tech, and uses Sony’s clever acoustic technology to create sounds from behind the display that reacts to what’s happening on screen. This is a cutting edge TV at a head-turning discount.

This mid-range 65in Panasonic TV has been discounted by a modest £30. It’s a 4K HDR10+ TV with local dimming technology for improved contrast, plus Dolby vision and Dolby atmos signal processing, so you know the sound quality and picture are going to be top notch. Better yet, it works with Alexa and the Google Assistant, and comes with Freeview Play built-in, letting you control on-demand entertainment with just your voice.

Best 55in TV deals in February

The 2021 model of this budget-friendly 55in 4K smart TV comes with Alexa voice assistant built in. Dolby Vision and HDR 10+ deliver sublime contrast and deep blacks, while DTS audio processing improves sound clarity – even without the use of an external speaker.

This near bezel-less 2021 Samsung TV is packed with features. It comes with HDR 10+, so you always get the sharpest picture; adaptive sound – meaning the audio adjusts to what’s playing on the screen, and nifty 4K upscaling.

Best 43in TV deals in February

This Samsung set is special for a few reasons: it launched in 2021 so it’s still very new; it’s relatively petite for a QLED TV and so it’s ideal for smaller rooms; and it uses the brand’s latest “neo QLED” pixel technology for improved contrast and image quality over previous QLED panels. It might be the best 43in television you can buy, and right now there’s a generous £200 discount at Currys.

An entry-level 4K television, the Samsung AU8000 uses an LED display that, while not as rich as a higher-end OLED or QLED screen, produces a vibrant color palette and a dynamic contrast ratio.

Best 32in TV deals in February

Exclusive to Samsung, the frame is designed to blend into the background when not in use and looks at its absolute best when mounted flush to a wall, preferably with some clever wire-disguising. It uses light sensors to detect ambient conditions and gently adjusts the brightness and temperature of the artwork displayed on screen to create the impression of a painting. Per pixel QLED lighting means the screen can be completely black in a dark room, enhancing the illusion when the TV is off and creating impressive, immersive contrast when used for watching TV and movies.

For the latest discounts on TVs and other tech offers, try the links below: