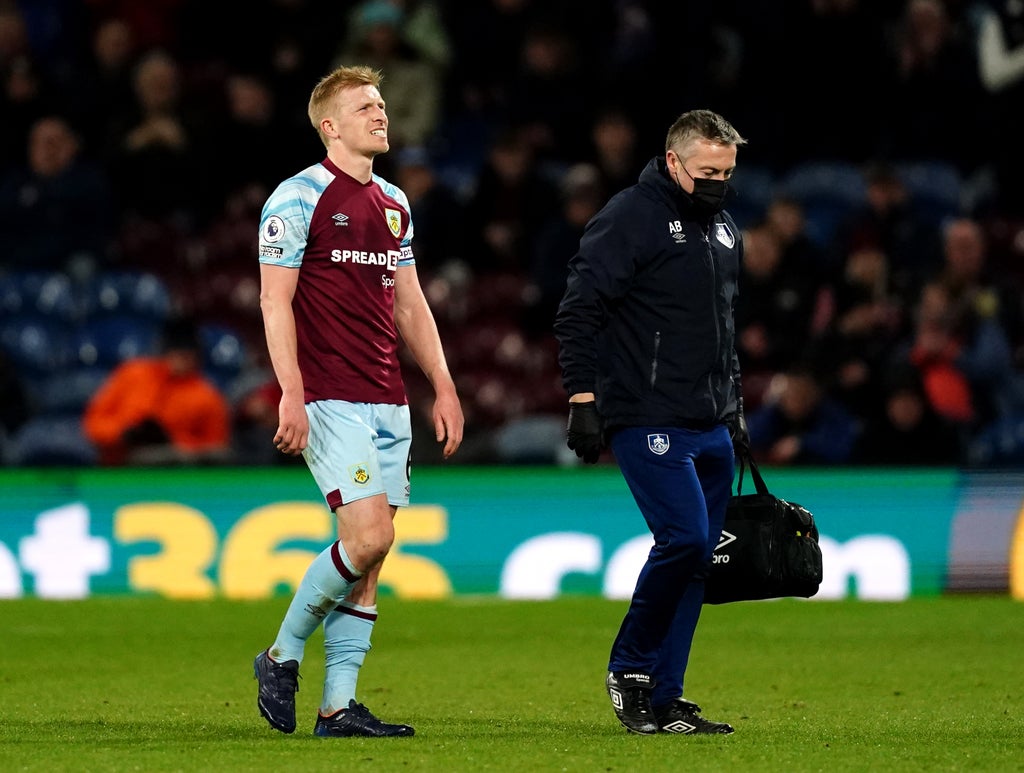 Burnley have a fresh injury concern over Ben Mee for Saturday’s Premier League visit of Chelsea after their captain was forced off in the first half of Tuesday’s 2-0 home defeat by Leicester.

Mee put in a strong challenge to block Patson Daka’s attempts to break into the box around 20 minutes into the match, and after twice receiving treatment on his knee the 32-year-old was forced off five minutes before half-time, replaced by Nathan Collins.

Sean Dyche said after the match he did know how serious the injury was, and was hoping for more information on Wednesday.

“I think he has a bang on his knee, hopefully a bang more than a twist but I will wait to find out more,” he said.

Burnley have the stingiest defense of any side in the bottom half of the Premier League but can expect a tough examination of those credentials when Thomas Tuchel’s side visit Turf Moor on Saturday.

Dyche admitted after Tuesday’s defeat his side had been off the levels which had brought them seven points from the previous three matches, breathing new life into their fight to avoid the drop.

They had frustrated Leicester for 80 minutes but had relied on a four fine saves from Nick Pope to keep things level, but eventually succumbed as substitutes Jamie Vardy and James Maddison tipped the game in the visitors’ favour.

Vardy set up the opener as he latched on to a long ball from goalkeeper Kasper Schmeichel to tee up Maddison, and then got the second himself in the 90th minute as he headed in a Harvey Barnes cross.

Both goals disappointed Dyche, particularly the first as Vardy was quickest to respond to Schmeichel’s clearance.

“I was really disappointed with the goals,” he said. “Vardy has made his whole career out of going on maybes.

“We’ve tried to do the right thing and open our shoulders but we’re relying on an offside and nowadays you don’t need to because it can be called back anyway.

“We just had that split second where we don’t react and end up recovering too deep to press.”

Leicester’s win was their first in the league this year, and also their first since Vardy’s last appearance – a 1-0 win over Liverpool on December 28 – before he was sidelined by a hamstring injury.

While his availability as a substitute on Tuesday perhaps came one match earlier than expected, Brendan Rodgers raised a few eyebrows with his decision to keep Maddison on the bench as well, though the strategy paid off.

“I just felt we needed that physicality in the side, especially early on with the pressing, having Kiernan (Dewsbury-Hall) up there gave us that extra man in midfield.

“One of the problems we’ve had is we haven’t pressed the game well enough and we’ve allowed too many opportunities. We’ve been great with the ball and not so great without it.

“Then we have those players to come into the game and make the difference.”

Defeat would have left Leicester only three points above a Burnley side who have been battling relegation all season, but the win instead moves them back up into mid-table and looking up.

“Just win the next game, that’s our target,” Rodgers added. “This was one of our games in hand. We’ve got to keep looking to perform well and not get too far ahead. If we keep trying to produce good performances we will get back to our level.”