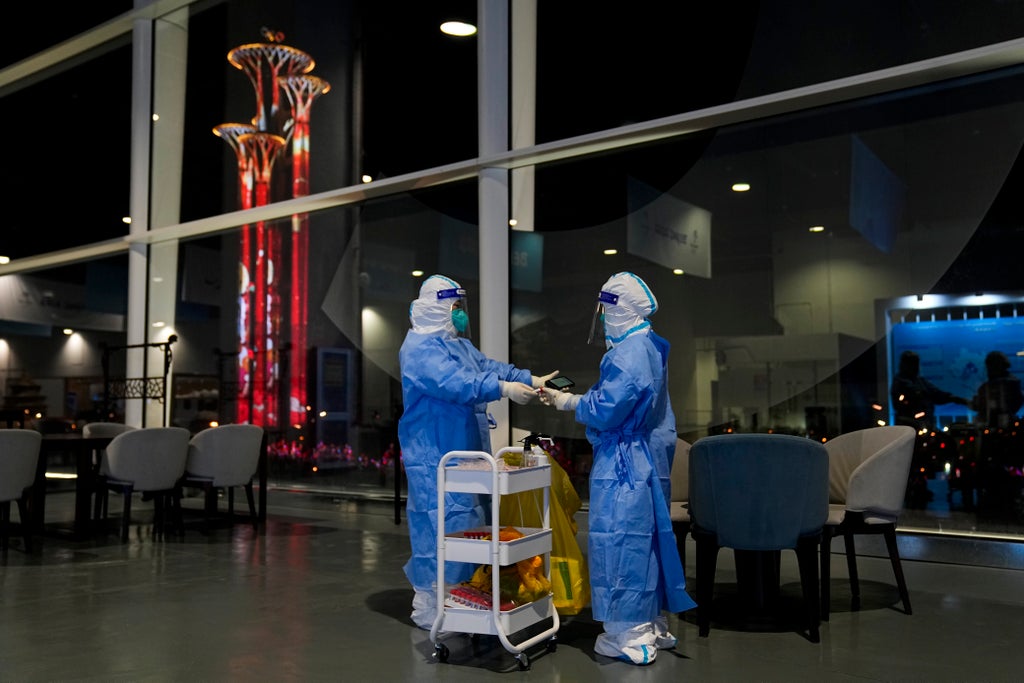 For a country determined to keep out the virus that first emerged within its borders, bringing in more than 15,000 people from all corners of the world was a serious gamble. It appears to be working.

One week into the 17-day event, China seems to be meeting its formidable COVID-19 Olympic challenge with a so-called “bubble” that allows Beijing Games participants to skip quarantine but tightly restricts their movement so they don’t come in contact with the general population. There have been 490 confirmed cases — many of them positive tests on symptomless visitors — and no reports of any leaking out to date.

Inside the bubble, Olympic organizers are employing a version of the government’s zero-tolerance approach. Everyone is tested daily for the virus, and anyone who tests positive is rapidly isolated to prevent any spread. Athletes and others are required to wear N95 face masks when not competing.

“Arguably the riskiest thing they’ve done so far is to host the Games, and if they can get through that, then they can continue to use this strategy to keep localized outbreaks under control for a long time,” said Karen Grepin, a public health expert at the University of Hong Kong.

China has tight restrictions on who can enter China and requires those who do to quarantine at designated hotels for two to three weeks. It responds to even the smallest outbreaks with lockdowns of buildings and neighborhoods, followed by mass testing of all residents to root out and isolate positive cases.

The strategy is not without cost. In the run-up to the Olympics, China expanded its lockdowns to entire cities of more than 10 million people to stamp out outbreaks, forcing factories and nonessential shops to close and restricting people to their residential compounds.

A southwestern area of ​​about 4 million people bordering Vietnam has been locked down this week because of an outbreak that has infected about 180 people. In Beijing, two residential neighborhoods remain locked down because of a handful of cases two weeks ago.

The closed loop, as the Olympics bubble is officially called, has created two separate worlds. Athletes and other participants aren’t able to visit Beijing’s tourist sites or restaurants and bars in their downtime. Their only glimpses of the city are from the windows of buses that shuttle them from lodging to venues and back.

Both their hotels and the competition venues are fenced off with temporary walls; guards are posted to keep people from going out or coming in.

Outside, life goes on as normal for most in the nation’s capital. Select groups — school children, corporate sponsors, winter sports groups, foreign diplomats and journalists among others — are being invited to fill the stands partially, but most follow the Games on their smartphones or TV.

“We don’t feel the Winter Olympics are far from our life,” said Yi Jianhua, a retiree from Hunan province visiting his daughter in Beijing. “We can watch it on TV and mobile phone. Although we cannot be there in the venue, we still pay close attention to it, because this is a grand event. Yes, there are regrets but it’s acceptable.”

China has had scattered outbreaks in the past month, but none related to the Olympics. On Friday, health authorities reported 22 new cases in an outbreak in Liaoning province, east of Beijing.

See also  Disney's Pam & Tommy may be 'based on' fact, but should be viewed as fiction – Alastair Stewart

None of the 450 confirmed infections inside the loop have spread to others in the bubble, Huang Chun, a pandemic control official, said earlier this week. And there have been no reports of anything medically serious.

The possibility of a large outbreak inside the bubble, potentially sidelining athletes from competitions, has been a greater fear than any leakage into the rest of China.

“I feel all the protective measures are well in place,” said Fang Yanmin, a tourist taking photos with her friend in front of a statue of Bing Dwen Dwen, the Games’ panda mascot. “There is no need to panic.”

Guo Haifeng, waiting for friends at a nearby subway station, applauded the closed loop, saying it prevents the athletes and public from interrupting each other’s lives. Even if he were offered tickets, he said he wouldn’t go.

“Because of the pandemic, we should try to avoid going to the scene,” he said. “We should restrain ourselves and not affect others.”

The final test will come after the Games, when thousands of Olympic staff and volunteers from China exit the bubble. They are expected to be required to quarantine for a week or more before leaving to try to forest the effects of any latent infections they might have.

China’s zero-tolerance policy has kept the virus at bay. Health authorities have reported 4,636 deaths since the start of the pandemic, a tiny fraction of those in other major nations. Most date from the initial outbreak in early 2020 that overwhelmed the health system in the city of Wuhan.

“For us, we achieved the goal of zero cases so we can travel with ease,” said Yi, the retiree.

Grevin believes the health and economic benefits of China’s approach have outweighed the costs, borne by those caught up in lockdowns and industries such as tourism, which has been damaged by on-and-off pandemic-related travel restrictions. Economic growth slowed to 4% at the end of last year but exports remain strong.

“They’ve had incredibly low mortality by any standard, and most of the country has lived a relatively normal life for the last two years,” she said.

China’s relative success may make exiting its zero tolerance strategy more difficult. Most of the nation’s 1.4 billion people have not been exposed to the virus, so they haven’t developed antibodies that way. And while the vaccination rate is high, the emergence of new variants such as omicron may make the vaccines in use less effective.

For at least the near future, that means anyone caught in an outbreak could face lockdowns and repeated testing — and those coming to China will be isolated in a hotel room for two weeks or more. The repercussions from the 2-year-old pandemic keep marching on.