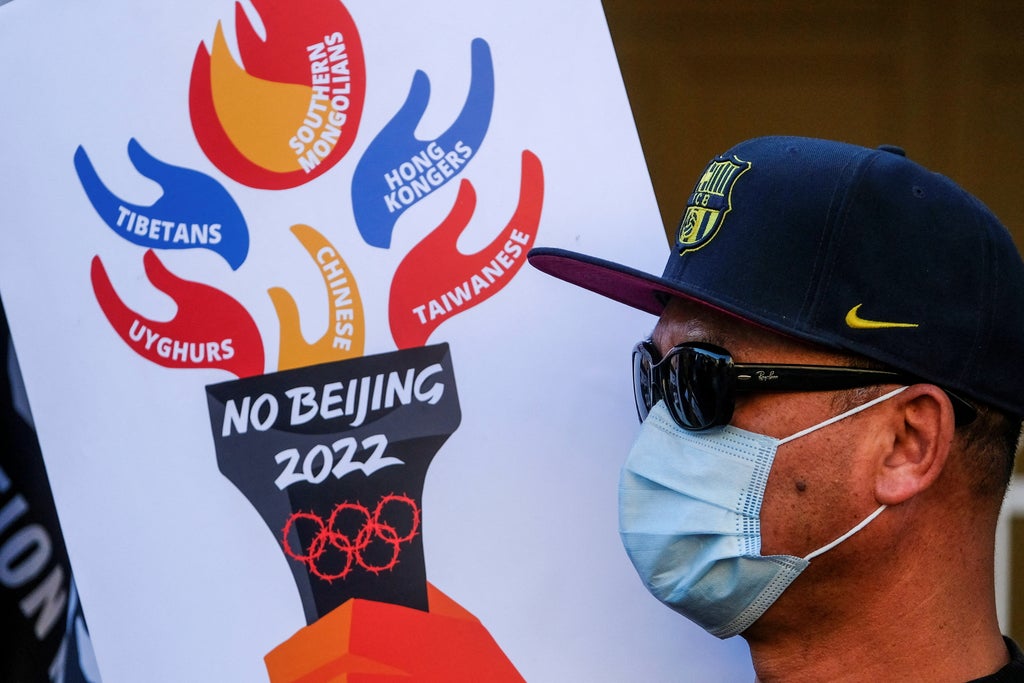 The last time Beijing hosted the Olympics – the Summer Games in 2008 – Uyghur human rights lawyer Rayhan Asat woke up early full of excitement to watch the Olympic torch relay in the Chinese city of Wuhan.

Now, as the 2022 Winter Olympics are about to begin, Ms Asat is one of many people worldwide protesting against the Games and questioning China’s human rights record.

“As China basks in the glory of hosting the Olympics that bolster its standing, I cannot imagine the betrayal the innocent Uyghurs feel at the cowardice of many world leaders?” said Ms Asat, who is now based in the US.

“Allowing a country that’s committing atrocities to host the Olympics is a stain on our consciousness,” she told The Independent by phone from New Haven, Conn.

The lawyer has been advocating for the release of her brother, Ekpar Asat, a Uyghur entrepreneur from Xinjiang who went missing in 2016 after attending a US State Department-sponsored course in Harvard, and was reportedly later jailed for 15 years on charges of “inciting ethnic hatred and ethnic discrimination”.

Ms Asat is far from alone in her denunciation of the Chinese government and the Winter Olympics.

The US, UK, Canada and several other Western nations are staging a diplomatic boycott over widespread allegations of Chinese abuses against the Uyghur minority in Xinjiang, while there have been protests worldwide with activists – Tibetan exiles among them – marching in Delhi and outside the International Olympic Committee (IOC)’s headquarters in Switzerland.

Ethnic Tibetans make up more than 80 per cent of the population in the Tibet Autonomous Region, one of the most restricted areas in China. Critics, led by exiled Tibetan spiritual leader the Dalai Lama, say Beijing’s rule amounts to “cultural genocide”.

“The Beijing Winter Olympics must not be allowed to pass as a mere sportswashing opportunity for the Chinese authorities, and the international community must not become complicit in a propaganda exercise,” said Alkan Akad, China researcher at Amnesty International.

Amid the growing global scrutiny on China, Beijing has repeatedly denied allegations of human rights abuses and says it opposes the “politicization” of sports.

“The so-called China human rights issue is a lie made up by people with ulterior motives,” Zhao Weidong, spokesman for the Beijing Games, said on Thursday.

What’s more, the Chinese government has warned athletes to be careful about what they say while at the Games as any speech against the Olympic spirit or Chinese laws would be “subject to certain punishment”.

The IOC has largely dodged questions around China’s alleged human rights violations and instead is emphasizing the need for the organization to remain politically neutral.

“If we are getting in the middle of tensions, disputes and confrontations of the political powers then we are putting the Games at risk,” IOC President Thomas Bach said on Thursday.

However, campaign groups continue to urge the IOC to ensure that athletes’ freedom of expression will be protected at Beijing.

“Athletes should not have to be scared for their safety when they go to China,” said Noah Hoffman, two-time US Olympian skier and a board member of Global Athlete, in a joint statement issued by more than 130 rights organizations.

“It is completely unacceptable that athletes have to censor themselves on human rights and other topics, in order to keep from being censored or sent home by the Chinese government,” he added.

Some activists have criticized the IOC for a perceived failure to challenge China over human rights concerns.

“(The IOC) know that the human rights situation in China is deteriorating, but it refuses to exert any pressure on the Chinese government,” Chinese human rights lawyer and activist Teng Biao told The Independent.

Mr Biao said the Chinese government had vowed to address human rights issues and improve the rule of law in the build-up to the 2008 Olympic Games, but ultimately failed to fulfill its promises.

In a speech to the IOC on Thursday, Chinese President Xi Jinping said China was ready to host the Winter Games, having consistently championed the Olympic spirit from 2008 to 2022. Mr Xi said China would do its best to deliver “a streamlined, safe and splendid” Games.

However, for many activists, such words ring hollow.

Hong Kong campaigner Frances Hui said she hoped China’s dramatic crackdown on the territory since 2019 would remind the international community about the promises that the Chinese government has failed to live up to over the years.

In the latest such development, veteran Hong Kong activist Koo Sze-yiu was arrested on Friday, days after he announced plans to protest the Beijing Winter Olympics outside government offices in the city, according to local media.

“Hong Kongers were hopeful, especially in 1997 and 2008, that the Chinese government would continue to give Hong Kong people the freedom and autonomy it had promised,” Ms Hui told The Independent.

“Now many are sentenced to jail while others have to flee their hometown,” she added. “Hong Kong’s civil society was completely dismantled with the loss of freedom of speech.”