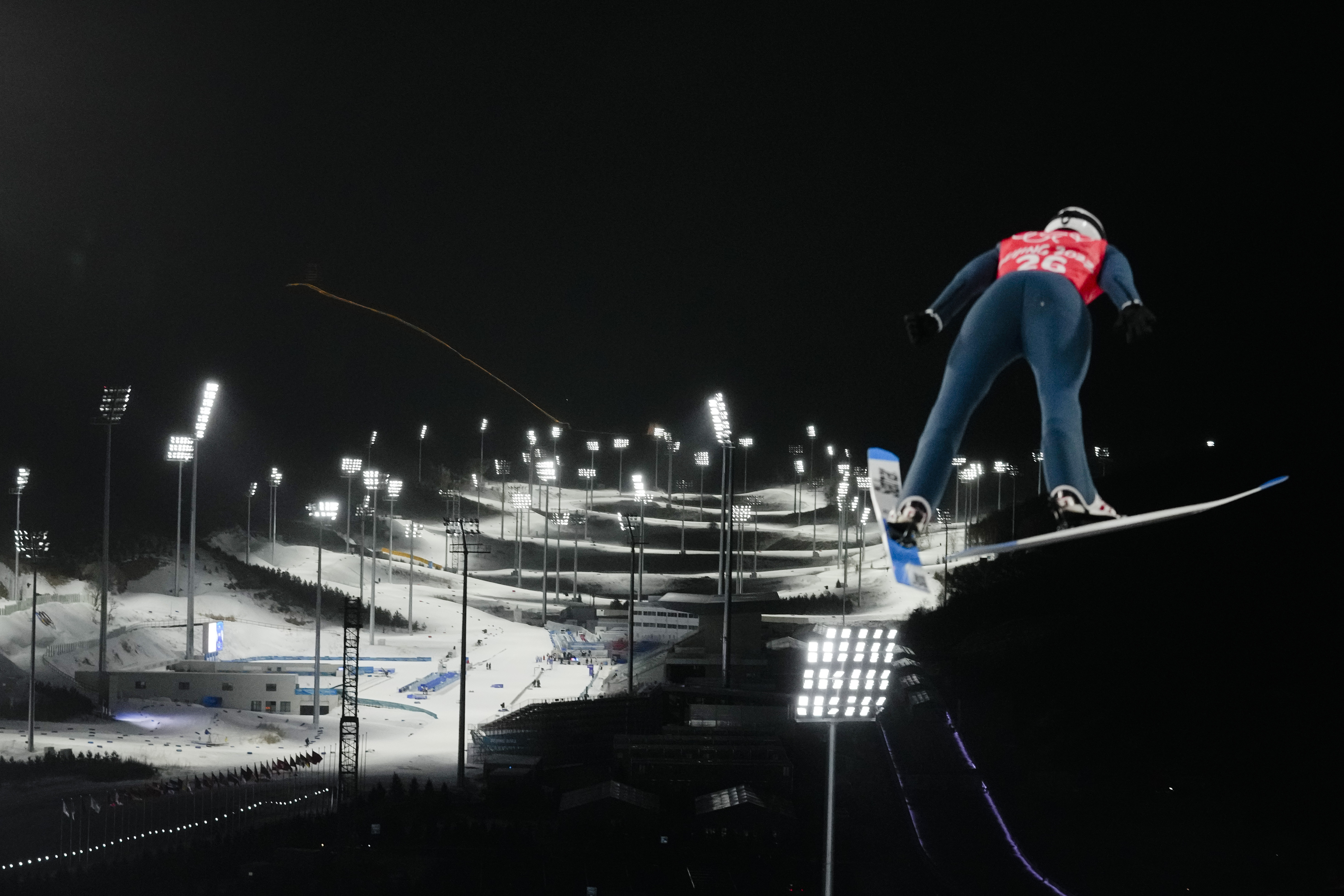 The red and silver Olympic torch has completed its journey through the Chinese capital before the opening of the Beijing 2022 Winter Games this Friday, February 4, in El Nido. A tour of only three days and the door almost completely closed. Barely 400 invited people, including journalists, officials, athletes and volunteers, witnessed the first relay in the Olympic park. It is one more of the extensive precautions taken against covid, one of the great concerns of the organizers of the competition that takes place until February 20.

Everything is ready for the inauguration of these Winter Olympic Games in El Nido, the stadium that China inaugurated for its first Games, in the summer of 2008. The doubles matches in curling have served as the premiere of an event that brings together some 2,000 athletes (only 14 Spanish). The bubble against covid around the three competition areas has been sealed for a month. Nearly 300 snow cannons imported from Italy have worked overtime in recent weeks to cover the dry mountains of Zhangjiakou and Yanqing in white, where despite the low temperatures it barely snows in winter.

The organizers, with President Xi Jinping at the helm, have promised a “safe, simple and splendid” Games. The president of the International Olympic Committee (IOC), Thomas Bach, has assured that this edition “will mark a new era for winter sports”.

It is the first time that a city has organized both types of Games, winter and summer, 14 years after those of 2008. Both events have things in common: in both, China has been determined to throw the house out the window to amaze to the world; human rights represent a sticking point with the West; they even share the same opening ceremony director, filmmaker Zhang Yimou. But other circumstances are completely different.

Unlike then, the United States and eight other countries have declared a diplomatic boycott and will not send senior officials to the Games, protesting human rights abuses against Muslim minorities in Xinjiang. There are also doubts about the situation of Peng Shuai, the tennis player who denounced sexual abuse by a former Chinese leader, and who disappeared from the public eye for three weeks.

Although the biggest difference, of course, is marked by the covid, which has dashed the hopes of the organizers of holding the Games in relative normality. A China that aspired to show the world its success against the coronavirus has seen how in the last two months outbreaks have emerged in different provinces that it tries to control against the clock. In Beijing itself, a small focus of the delta variant – and half a dozen cases of omicron – has left at least 115 infections and is still not completely under control.

In Chongli, 180 kilometers from Beijing and which will host part of the competitions, Wang Jingxiang, head of the National Ski Jumping Center, proudly shows journalists that facility, one of the crown jewels of these Games. The futuristic design of it has been inspired by a ruyi, a buddhist scepter symbol of good luck. His tracks, he assures, have the most advanced design, designed to reduce the risk of serious falls. And its construction has been one of the most complicated. “The pandemic has presented many difficulties for the construction of these runways,” says Wang, “many workers and the construction process were affected. But we have overcome those difficulties.”

The measures to prevent the spread of covid are even stricter than at the Tokyo Games this past summer. All participants in the sports macro-event must arrive vaccinated at least 14 days before with the complete schedule. If for medical reasons it was not possible, they would have to complete a 21-day quarantine. Upon landing, they remain inside the bubble since their arrival in Beijing, where daily pcr tests will be carried out and where workers and volunteers have already been locked up since January 4.

Athletes can only move between the different facilities, and can only participate in activities related to their sport. Special vehicles have been assigned for their transport, which circulate in reserved lanes. In the press area, food for accredited reporters is served by robots.

As in the Tokyo 2020 Games, the organizers have been forced to throw in the towel and give up ticket sales. It was already announced months ago that there would be no foreign audience. In January it was confirmed that tickets would also not be sold to domestic viewers, who were expected to have generated more than €100 million in revenue. Instead, small groups by invitation will attend the stands, which will have to pass strict controls – including several pcr tests and the complete vaccination schedule – to witness the competitions.

See also  Images of the destruction in Mariupol

The isolation between the bubble and the local population is absolute. So hermetic is the system that citizens have been instructed that, in the event of an accident involving one of the vehicles for the delegations, they should not approach to provide assistance. Even in Beijing, the hotels where they stay and that are part of the closed circuit are fenced and protected by the police.

At the moment, the system seems to work. Although nearly 300 covid cases have been detected inside the bubble, no jump cases have been reported to local residents. Those infected are transferred to specific hospitals, in the vicinity of the competition areas. They will only be able to leave once the symptoms have disappeared and they test negative twice.

Beijing was not the preferred starting candidate when the International Olympic Committee (IOC) awarded these Games in 2010 after the withdrawal of the European applicants. China had no tradition in these sports, which were only practiced by a small and very wealthy minority. Its few facilities were very rudimentary. And, above all, although Beijing’s winters are very cold, they are also very dry. Neither the capital nor the surrounding mountains receive hardly any snow. The government promised facilities of the highest level, and that by 2022 about 300 million Chinese would be initiated into these sports. A promise that he claims to have fulfilled, with 346 million started.

The lack of snow is already a chronic problem in the Winter Games. Both Sochi (2014) in Russia and Pyeongchang (2018) in South Korea had to resort to cannons to make artificial snow. But in the case of Beijing, it will be the first time that all of it has been produced by machines.

In itself, it is not a problem for the practice of sport. Artificial snow is more compact and allows better sliding. But experts point out that the water needed to make it is a very limited resource in the sports areas of Beijing 2022, and using it for the tracks means no longer using it for agriculture or other purposes. The environmental organization China Water Risk, in Hong Kong, assured in a 2019 report that all of Beijing is a city “with enormous water problems.” In Zhangjiakou, water availability per person is a fifth of the national average. Professor of hydrology Carmen de Jong, professor of hydrology at the University of Strasbourg, considers that holding the Games in that area is “unsustainable” for the environment.

China, on the other hand, claims that the conversion of these traditionally agricultural and resource-poor areas into a major sports tourism center has created new jobs and eliminated poverty in the area. And that the water available, well managed, is enough. Official calculations speak of 186,000 cubic meters of water, or 49 million gallons. The consumption of the facilities in Zhangjiakou represents 2.8% of the resources in that area; in Yanqing, 4%, says Beijing Olympic Committee spokesman Zhao Weidong. An ambitious reforestation project has also reduced water loss.

In Chongli, a series of cisterns have been built to store the water that falls during the summer rains. This water is reserved and is used to make artificial snow. Without other added substances, when it melts it is absorbed by the ground, where a new cycle begins. “We are self-sufficient, ecologically circular,” says Wang.

As is often the case in each edition of the Games, the real challenge, demonstrating that the investment and these systems are sustainable in the long term, will begin after the closing.