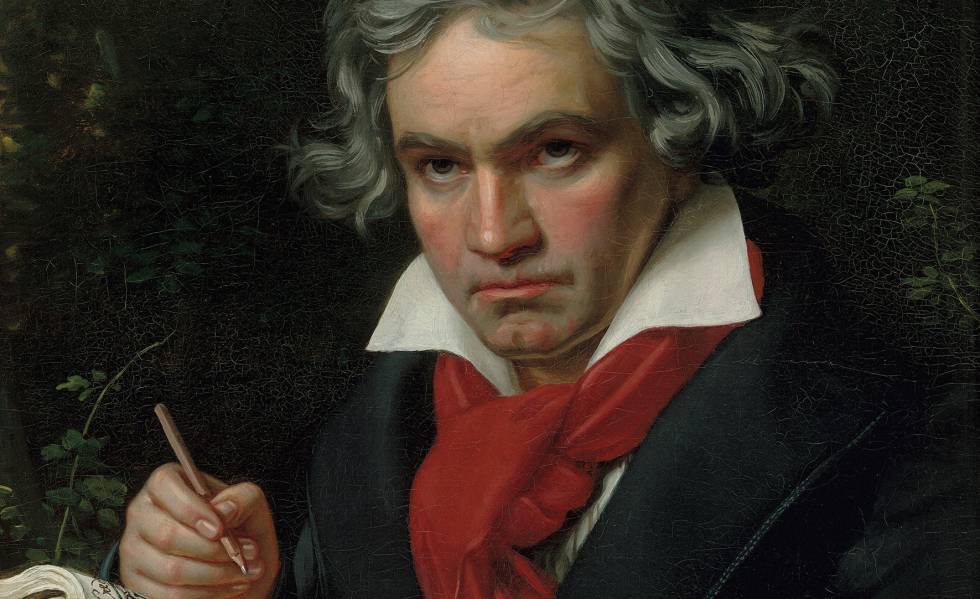 For Ludwig van Beethoven (Bonn, 1770-Vienna, 1827) the current pianists would be amateurs. The difference is not in technical prowess or musicality, but in improvisation. Today we identify this creative practice with jazz, and its knowledge is not indispensable for any classical pianist. But, at the beginning of the 19th century, it served to distinguish a dilettante from an expert. And an instrumentalist had to fill the scores he played with personal additions, whether they were ornaments, fermatas, or cadences.

We have a lot of information from that time on piano technique and the instruments used, but it is not easy to know how Beethoven improvised. “The testimonies are sometimes contradictory”, assures the pianist and composer Gianluca Cascioli in a videoconference with EL PAÍS. “But we know that some indications of Beethoven’s scores have changed their meaning.” And he shows it with an anecdote transmitted by his disciple Carl Czerny to Theodor Leschetizki: “During the interpretation of a sonata, the composer ordered him to improvise a fermata on a pilot whale sign. After two short or inappropriate attempts, he opted to run his fingers in a brilliant three-octave passage until Beethoven grabbed him by the shoulder and yelled, “That’s too much!”

Cascioli (Turin, 42 years old) has just published, on the Harmonia Mundi label, his recording of the Concert number 4, by the German composer. In it he does not play any period instrument, but his interpretation is closer than any other to the sound intentions of Beethoven, through manuscripts, treatises and other contemporary testimonies, which complete the version published in the Bureau of Arts and Industry. “I do not pretend to offer absolute certainty, although I would like to demolish our granite conviction that we are playing exactly what Beethoven wanted,” he says.

The origin of this project dates back to the late nineties. “I was looking for a source for the work close to Beethoven and my record label, Deutsche Grammophon, provided me with photocopies of a manuscript kept in the archives of the Society of Friends of Music in Vienna and produced by Josef Klumpar, one of Beethoven’s copyists. . It included abundant additional virtuosic passages, in the first movement and in the third, hastily written above the solo part. Shortly after, I was able to consult the original in Vienna and I learned that those pencil additions were by Beethoven himself ”.

The pianist refers to the famous manuscript A82b, commented on by Gustav Nottebohm in Second Beethoveniana (1887), whose study continues to divide musicologists. There are those who claim, such as Hans-Werner Küthen, that it is a pre-premiere version and intended for a private, chamber-based interpretation of the work. Others maintain, like Barry Cooper, that these additions were after the publication of the score, in August 1808, and Beethoven wrote them down in a hurry to be able to play them on the day of the premiere, on December 22 of that year, at a marathon runner. concert that included the first auditions of the Fifth symphony, the Pastoral and the Coral fantasy.

Each theory has generated a different record edition. In 1998, the pianist Robert Levin recorded Küthen’s chamber version in DG, for piano and string quintet. And, in 1993, Mikhail Kazakevich recorded Barry Cooper’s orchestral proposal, on the Conifer label, under the direction of Charles Mackerras.

Cascioli opts for the orchestral version. “I cannot assure you that this ornate version of the solo part was what Beethoven played at the premiere of his Fourth concert, but there is a testimony of Czerny, which Nottebohm collects in his Second Beethoveniana, and which ensures that the composer played the work taking many licenses and introducing many more notes than were written in the published version “. The Italian pianist has chosen to make his own transcription of this kind of improvisation written by Beethoven. “He uses an extremely difficult notation to decipher, since he wrote it for himself, in stenographic handwriting.”

The additions include exquisite details that enhance the published version. An example is the start of development, in the cheerful moderate opening, where Beethoven sketches an exquisite contrapuntal dialogue. Cascioli debuted this version of the work at the London Proms in August 2005. On that occasion, the critic Andrew Clements accused the pianist, in The Guardian, to add other licenses, such as the arpeggiated initial chord. “I was crucified for it and it is true that it is not written that way, but Czerny points out it in his Pianoforte school, probably because he learned it from Beethoven ”, he admits.

In his intention to deepen the spirit of this music, Cascioli has found ideal companions in Riccardo Minasi and the excellent Ensemble Resonanz. A conductor and violinist specializing in historically informed performance and an ensemble of 36 musicians who combine modern instruments with period criteria. We can see this in the flexible handling of the weather of walker with motorcycle. Here Beethoven supposedly evokes the myth of Orpheus appeasing the Furies, and we hear the piano walking at a slower pace than the orchestra. “This is also proposed by Czerny to contrast the difference between two antithetical ideas and it surely comes from Beethoven, although it appears much earlier in the Piano school, by Daniel Gottlob Türk “, he remarks.

Cascioli is also not alone in his intention to overcome the limitations set in the score published by Beethoven, the young pianist Juan Pérez Floristán (Seville, 28 years old) agrees with him: “We cannot forget that the score is tremendously imperfect and anyone who Try to accurately transcribe a melody sung by Jonny Cash, Nino Bravo or Rosalía, you will see how short the musical notation is. The score must be read in depth, but in itself it is worth absolutely nothing, “he says in an audio from WhatsApp.

It is not surprising that this Spanish pianist has adopted, like Cascioli, that ornate version of the Fourth concert Beethovenian. With her he debuted, in February 2020, with the Valencia Orchestra. And he also played it, last May, in the final of the prestigious Arthur Rubinstein Competition, in Tel Aviv, which he won. “They almost disqualified me for this,” explains the pianist, “because the rules indicated that we should play works from published editions and not from manuscripts. Fortunately, the members of the jury contacted Robert Levin, who had used that manuscript in his recording, and they accepted my proposal ”.

Pérez Floristán has assimilated Beethoven’s ornamentation, with slight personal modifications. He has done it from the transcripts of Luca Chiantore (Milan, 55 years old) included in his book Beethoven on the piano (Musikeon Books, 2020), where we read the most complete study of the aforementioned Viennese manuscript A82b. This Italian pianist and musicologist, based in Spain, has continued his sound investigation of Beethoven’s music, based on numerous notes and sketches by the composer, with the inVersions project. A deliberately subversive artistic proposal that aspires to change our expectations. “I intend to challenge, through musicology, the traditional interpretations of Beethoven, so linked to what is written exclusively in his scores,” explains Chiantore about to fly to Mexico.

The first result of his project was a CD with experimental interpretations of the sonatas. Moonlight Y Waldstein, with personal contributions and variants of the composer located in his manuscripts. Now he has just offered, in Mexico City and Morelia, another experimental version as a soloist of the Concert number 5 “Emperor”, adding fermatas, cadences and interludes. “For all the variants, I use the notes that appear in the sketches of this work and in other sketches, and I have even made the indications of basso continuous pointed out by the composer”, he admits. But his work is not limited to the solo piano. “I have also rewritten the timpani part with passages optionalWell, we know that the percussionists of the time were very free and added many more notes than those that appeared in the score ”.

Chiantore ends his book by paying homage to Frederic Rzewski as a pioneer in practicing a creative and experimental approach to Beethoven’s music. This American composer and virtuoso, who died in June at the age of 83, recorded live versions of the sonatas Hammerklavier Y Passionate, with makeshift fermatas, additional ornamentation, and a rhetorical understanding of the weather and dynamics.

“I do it because I think it’s authentic,” said Rzewski when asked about it: “It’s what I think Beethoven would have done.” His interpretations allow us to glimpse the advantages that a fluid communication between composition and improvisation brings to Beethoven. The future of the piano performance of the Bonn composer, beyond historical technique and period instruments, is to claim his most admired skill: that of a great improviser.