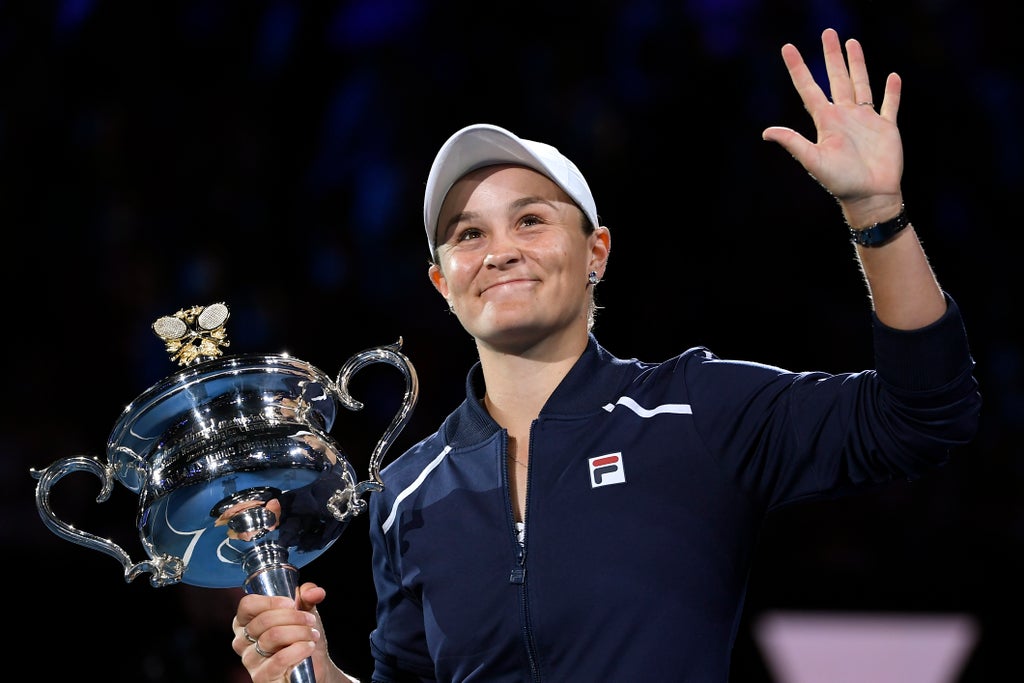 Ash Barty will no longer need to overthink the 1970s when she prepares for the Australian Open.

The top-ranked Barty recovered from 5-1 down in the second set to beat Danielle Collins 6-3, 7-6 (2) in the final on Saturday night, ending a 44-year drought for Australian women at their home Grand Slam tournament.

Barty is the first Australian women’s singles champion since Chris O’Neil in 1978. She was the first homegrown player to reach the final since Wendy Turnbull in 1980.

The pressure is off the 25-year-old Aussie who has made a remarkable career comeback after taking time off — missing every Grand Slam tournament in 2015 and ’16 — and briefly flirting with taking up a professional cricket career after three first-round exits at the majors in 2014.

Barty now has Grand Slam singles titles on three surfaces, adding the hard court at Melbourne Park to her win on grass at Wimbledon last year and on clay at the 2019 French Open. She joins Serena Williams as the only active players on the women’s tour with majors on all three surfaces.

Evonne Goolagong Cawley, a tennis icon with seven Grand Slam singles titles and a trailblazer for Indigenous athletes from Australia, was a surprised guest to present the champion’s trophy to Barty, who is part of a new generation of Indigenous stars.

O’Neil was involved in the night, too, after carrying the trophy into the stadium for the pre-match ceremony.

See also  Djokovic's first message from the hotel: "Thank you to people around the world for your continued support" | sports

“I’m an incredibly fortunate and lucky girl to have so much love in my corner,” Barty said, thanking her coach and support team, her family, the tournament organizers and the crowd.

Barty hadn’t dropped a set and had only granted one service game through six matches, against American Amanda Anisimova in the fourth round.

The 28-year-old Collins was the fourth American to take on Barty in four consecutive rounds. Barty had beaten Anisimova, Jessica Pegula and 2017 US Open runner-up Madison Keys in straight sets.

Collins had spent more than four hours longer on court than Barty in her previous six matches, having to come back from a set and break down to beat Danish teenager Clara Tauson in the third round and rally from a set down to beat Elise Mertens in the fourth.

Barty took the first set after saving a break point in the fifth game and then breaking in the next.

Not to be outdone, Collins hit back quickly, unloading with her powerful ground strokes and relying on her high-intensity game, breaking Barty’s serve in the second and sixth games to take a 5-1 lead.

Collins twice served for the set and twice was within two points of leveling the match and taking her first Grand Slam final to a deciding set.

She led 30-0 in the seventh game of the set, but started to lose momentum when Barty jumped on a second serve and sent a return winner down the line. Another forehand winner just caught the baseline and then Barty got a breakpoint chance with another powerful forehand.

Collins went to the chair umpire to complain about people making noise during the point and got booed heavily by the crowd. The umpire asked fans to refrain from shouting during play, as a courtesy to both players.

When Collins hit a backhand wide to drop the game, she got another loud boo from the crowd.

Barty picked up the energy from an almost full house in Rod Laver Arena, despite government restrictions on ticket sales in the COVID-19 pandemic.

She won five of the next six games to force a tiebreaker and then took control by racing to a 4-0 lead.

“As an Aussie, the most important part of this tournament is being able to share it with so many people,” Barty said. “This crowd is one of the most fun I’ve ever played in front of. You relaxed me, forced me to play my best tennis.”

Barty had reached the quarterfinals at her home major in the three previous years and was the top seed for the third straight year, but her best run until Saturday at Melbourne Park was a semifinal loss to eventual champion Sofia Kenin in 2020. The pressure of home expectations had taken a toll in the past. This time, she said, she was just rolling with it.

There were pockets of fans in gold shirts with Barty printed on the front in red, mimicking the logo of Vegemite, the famous Australian condiment. Other fans wore the canary yellow shirt of the national World Cup-winning limited-overs cricket team — a nod to one of Barty’s other sporting passions.

Australian flags and the red, black and yellow Aboriginal flag were waved around the crowd. Cathy Freeman, who draped both flags around her to celebrate her gold medal in the 400 meters at the Sydney 2000 Olympics — one of the defining images of those Games — was sitting adjacent to the baseline in Rod Laver Arena in full support.

Barty congratulated Collins and told her she “absolutely” belonged in the Top 10, adding: “I know you’ll be fighting for many of these in future.”

The run to the final was the best at a Grand Slam so far for Collins, who reached the semifinals in Australia in 2019 and the quarterfinals at Roland Garros.

She paid tribute to her longtime mentor Marty Schneider and her boyfriend Joe Vollen, who were in the stands for support.

“Thank you for believing in me,” she said, crying. “I haven’t had a ton of people believing me in my career. To support me every step of the way means everything to me.”