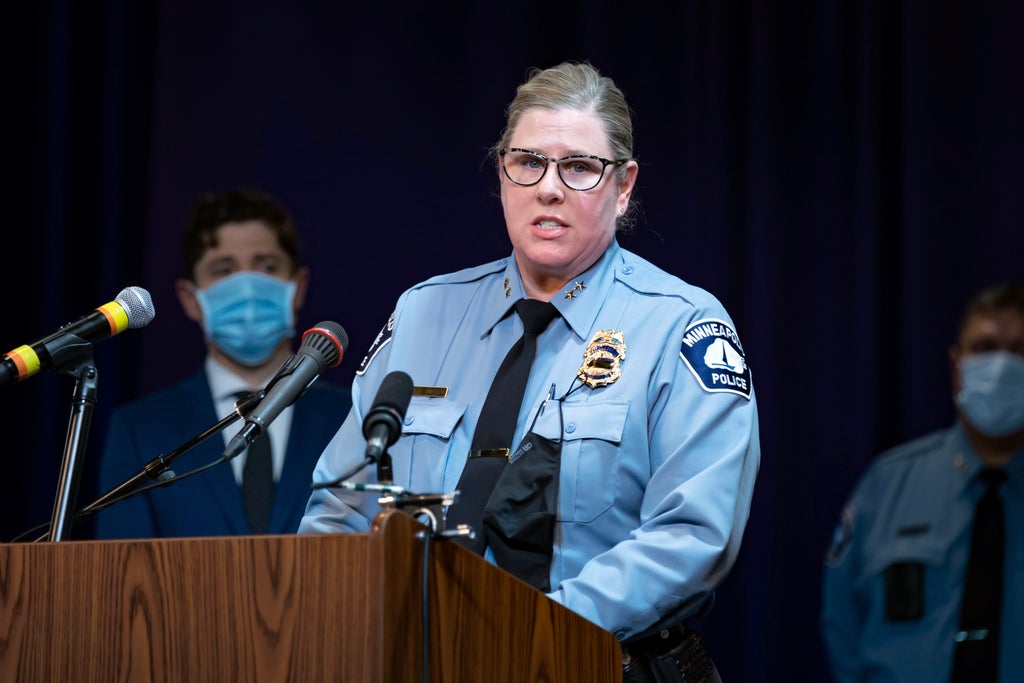 Minneapolis Police Chief Amelia Huffman was taking questions about the fatal shooting of 22-year-old Amir Locke when a reporter challenged the police account that Locke’s gun was pointed toward officers serving a search warrant. Huffman’s attempt to explain was too much for one local activist.

“This is what I would call the anatomy of a cover-up,” Nekima Levy Armstrong said, striding forward to confront Huffman and Mayor Jacob Frey at the news conference. “Amelia, you’re saying you want to be the chief. Then act like it. … Don’t cover up for what those cops did.”

The exchange underscores the fraught situation that Huffman — named interim chief just weeks ago and a candidate to take the job permanently — faces as she attempts to steer a department in tatters since George Floyd’s killing 20 months ago shattered community trust.

Huffman, who joined the department in 1994, built a wide-ranging resume before Frey tapped her to replace the retiring Medaria Arradondo. Huffman investigated financial crimes, crimes against children and Internal Affairs cases, served as a department spokeswoman and commanded units including Homicide.

A police spokesman didn’t respond to a request to interview Huffman. In a 2019 interview with a Minneapolis weekly, Huffman, of Springfield, Ohio, described studying constitutional law at Smith College before joining the police department.

“Minneapolis was looking to hire people who had backgrounds in things other than law enforcement,” Huffman told the paper. “I wanted to do something that would make a difference — not just pushing meaningless papers from one place to another.”

John Swenson, the director of public safety in Lino Lakes, Minnesota worked with Huffman in Minneapolis’ Internal Affairs division for about a year in the early 2000s. Both sergeants, they handled investigations within the department and for agencies that needed an outside perspective.

He recalled teaming with her on an investigation into an allegation of sexual assault against a police officer in rural Minnesota. Huffman’s compassion for her while interviewing both the victim and the suspect as well as her attention to detail stuck out, he said.

“She’s an incredibly smart individual who cares a tremendous amount about her work product and being professional, and wants to see the organization and our profession continue to move forward,” Swenson said.

While homicide chief in 2007, Huffman, who is white, clashed with a high-profile Black investigator over her public suggestion that a man’s murder was connected to a drug purchase — upsetting the victim’s family and the investigator.

Then-Chief Tim Dolan backed Huffman and transferred the sergeant to another department. Dolan said in an interview that the investigating sergeant undermined Huffman by going public with his opposition to her comments from her and had been warned before.

“But you have to decide whether you back the commander or you back the sergeant,” Dolan said. (Huffman) “is bright, fair and capable. She deserves my support.”

Arradondo, who is Black, had worked with Frey on a raft of policy changes aimed at overhauling the department’s policies and culture following Floyd’s death. He also came out publicly against a voter referendum in November to replace the department with a new public safety unit, which was defeated. But soon after, he announced he would retire anyway.

Reaction to Huffman’s interim appointment was largely muted, with Levy Armstrong and other activists saying they didn’t know her well. Much of the anger since Locke’s death has focused on the department for executing a no-knock warrant — Locke’s parents said body-camera video suggested Locke had been startled awake and then “executed” by officers swarming into the apartment — and for its initial account of events, including a news release that called Locke a “suspect” even though he wasn’t named in the search warrants.

For the activists, those actions fit the pattern of a department focused on protecting their own.

“She stepped into that role knowing that we are still grappling with the impacts of the murder of George Floyd… knowing the expectations for accountability and transparency,” Levy Armstrong said this week. “That is the standard you are held to. I don’t feel that she rose to the occasion.”

Michelle Gross, president of Communities United Against Police Brutality, said she initially questioned whether Huffman had the ability to transform the department and considers the interim chief’s handling of Locke’s death confirmation of that fear.

“Own the mistake, apologize for it and tell us it’s not going to happen again,” Gross said. “She did none of that.”

When Huffman was made inspector of the Fifth Precinct spanning southwest Minneapolis, the city was still reeling from the 2017 fatal shooting of Justine Ruszczyk Damond by a police officer. In the 2019 interview on taking that new position, Huffman pledged that she and officers in the area would focus on being out in the community, creating low-pressure opportunities to get to know people.

“Healing that chasm is going to take time and work,” Huffman said. “We need to engage with folks during the course of their regular life.”

But she was also focused on bread-and-butter policing, saying residents were unlikely to see major changes in priorities and specifically listed a focus on drug and property crimes including burglary and theft.

Floyd’s murder put the city’s police force under a microscope again the following year. While many large protests in Minneapolis remained peaceful, some people looted and vandalized businesses in the Uptown neighborhood, within the Huffman oversaw precinct.

Jill Osiecki, executive director of the Uptown Association, said those attacks were “catastrophic” for some businesses and credited Huffman for making one-on-one visits to each affected place and never rushing those conversations.

“It was so impressive to see somebody rise to that occasion in such a difficult time,” Osiecki said. “For many reasons, it’s very difficult to be a police officer in Minneapolis. I truly feel she is a compassionate human being.”

Huffman became part of Arradondo’s leadership team in February 2021 as a deputy chief overseeing professional standards, including training. Her interim chief appointment was announced in December and she took over on Jan. 15.

Frey credited her with the department’s adoption of training that emphasizes officers’ responsibility to intervene when a steering coworker is putting someone in danger and reforming its field training officer program.

“She has an encyclopedic knowledge of policy, procedure, and training — the building blocks of enacting a culture shift across the department and keeping our city safe,” Frey said when he announced Huffman as interim chief.

Asked about activists’ calls to fire Huffman, Frey stood by her this week without any commitment for the future.

“I didn’t appoint interim Chief Huffman to serve as interim chief only in good times,” he told Minnesota Public Radio News, adding that the city is “moving forward with a national search to make sure we end up with the best possible person in our police department.”

Find AP’s full coverage of the death of Amir Locke at: https://apnews.com/hub/amir-locke