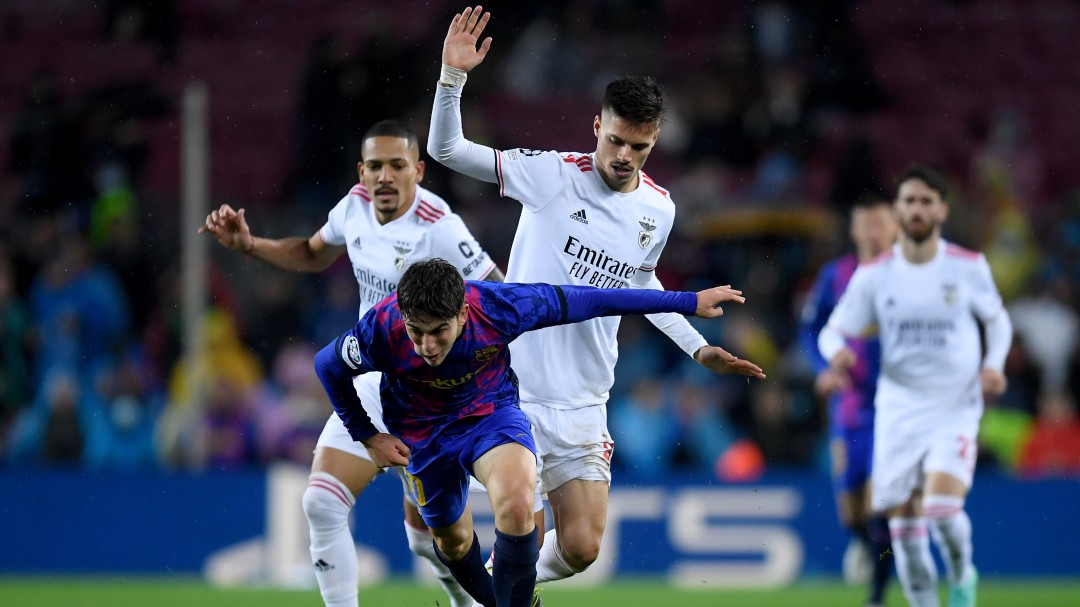 Barça tied against Benfica (0-0) in a match that showed the Catalans’ lack of punch, forcing them to play the pass to the second round in Munich against Nagelsmann’s Bayern.

Barça has been living on the tightrope for too long, and that is something that will not change in the near future no matter how much Xavi Hernández wants to do tightrope walking. That way of standing on the tightrope requires taking risks to get out, and the new tenant on the bench knows where to look to risk. As if it were Cruyff, the Catalan coach opted for a striking 1-3-4-3, clearly demonstrating his intentions in a game vital to the economy and the club’s project: against Benfica, it didn’t matter what happened, because it would happen as that had made Barça great.

Although the quality of Nico González and Gavi (who today were guarding Memphis Depay from the midfielder) made control and approaches to the area fall under their own weight, it was evident that the tension for a good result was there. Ter Stegen, who is not curdling his best season although little by little he is returning to his level, failed to start the ball, putting Yaremchuk on a tray that almost opened the scoreboard. Benfica knew perfectly well that this was their game, playing more with the needs of Barça than with their own. If they made it to the second half alive, they were going to have their chance, and Xavi Hernández’s men had to avoid it anyway.

Nico and Gavi, with the impudence typical of youth and with the consciousness of a veteran about what was at stake, were the ones who best interpreted what Xavi wanted from his footballers. Their individual actions, simple for them but unattainable for the rest, made the collective work in attack. In one of those individual plays there was a chance for Jordi Alba, who despite not ending up in a goal due to a good save Vlachodimos, lifted the Camp Nou. The problems came when Nico and Gavi, because of not being able to multiply, did not appear on all sides.

In defense, with the three-central scheme, either due to nerves or lack of confidence, the team did not work. Yaremchuk, the only forward of the Portuguese, brought headaches to the defenders, being Araújo the only one capable of reducing water. With those bad feelings came two actions that could put an end to Barça’s morale, but either by Ter Stegen or by luck, the score remained at zero. After seeing the wolf’s ears, Barça lowered its arms despite the fact that it was close to winning at halftime due to a brilliant action by Demir, who ended up hitting the crossbar.

The return of the changing rooms did not favor Barça. Although the stands were plugged in again after Demir’s option at the edge of halftime, Xavi Hernández’s team did not quite believe it and time continued to run. Despair was taking hold of the Catalans, falling little by little into Benfica’s trap. The entry of Darwin Núñez, the executioner of Koeman’s team at Da Luz at that time, put all the Lisbon cards on the table. There was more than half an hour left and Barça had already suffered too much.

Faced with a declining morale, Xavi decided to wake up his team with the departure of Dembélé. Although it was a sign that any past time was better, it was comforting to see the Camp Nou public cheering their own, increasing the decibels of the Frenchman’s entry. The winger, with his unpredictability as a flag, shook up the game by giving a variant to the stuck positional attack from Barcelona. His drives down the right tipped the field toward Vlachodimos’ goal, and the goal was looming.

Despite the danger coming through lateral centers against a well-planted defense, Jordi Alba had the necessary coolness to break Benfica with an anthological pass while leaving behind, putting Araújo in an ideal situation to score. The Uruguayan did not fail, causing the Camp Nou to explode in jubilation. Although, as has been the norm in the Blaugrana fiefdom in recent times, the joy does not last long. The linesman raised the flag and the VAR confirmed it: Araújo was offside.

The meeting ended with Barça aware that the train had passed, trying with little faith. In a counterattack, Seferovic freed the Catalans from a defeat with one of the failures of the season, thus saving himself from a worse situation for the last day. With the final whistle, everything remained practically the same, since Barça continued to depend on itself to go to the second round. Even in this way, the problem was that this “depending on themselves” had small print, since it implied winning in Germany at Bayern. If they did not take the three points, we would have to wait for the result of Benfica against Dinamo Kiev in Lisbon. Therefore, Xavi cannot be completely dissatisfied … although time is running out to prepare to do the trick to win in Bavaria and they don’t have too many ballots.