Cancer is a heartbreaking illness which devastates so many lives.

This World Cancer Day, the Greater Manchester Cancer Alliance is reminding those with potential symptoms that they should never let fear stand in the way of them seeking help from their GP.

In 2018, Karen had just returned from the trip of a lifetime, having taken early retirement from her role at Manchester Metropolitan University. Not long after her return to the UK, a cough which lasted for a number of weeks was the prompt she needed to contact her GP.

She was prescribed antibiotics, and her GP sent Karen for a chest x-ray – the results of which triggered a raft of further investigations.

Karen soon received a heartbreaking diagnosis of lung cancer. Karen explained the fear and anger that consumed her on a trip away. The fit and active 66-year-old said: “I had a sinking feeling.

“I remember going off to Wales on my own to go hill-walking, and screaming at the hills and the cloud and the wind: “This isn’t fair!”

According to figures from Cancer Research UK, 47,800 people in the UK are diagnosed with lung cancer every year. Although lung cancer makes up 13% of all cancer cases, referrals have been affected by the pandemic, with some evidence suggesting the public are weary of Covid-19 and others reporting they would rather not have a confirmed cancer diagnosis.

South Manchester specialist cancer GP Sarah Taylor says: “Often, these symptoms may be nothing to worry about, but we know that if a patient has symptoms that do turn out to be cancer, the earlier it’s diagnosed the better.

“That said, we know people can let the fear of diagnosis put them off seeking help. Cancer treatments and research have come on leaps and bounds compared to what many people may have in their minds from say, 10 or 20 years ago.

“It’s never too late to seek help if you think something is missing, but the main point is not to delay.”

Karen’s clinical team explained that because her cancer had been picked up early, it was small and hadn’t spread – so they were fortunately able to treat her with surgery alone, by removing a part of her lung, without the need for additional chemotherapy or radiation therapy.

“I was being told that they were operating to cure me,” she recalls.

“It was described as the gold standard of treatment and that I’d be back to normal in a few months.”

Karen explains her advice to others who are concerned that something may be wrong, but are perhaps worried about the outcome.

She says: “I can only say, you just need to go to your GP. If your fear is that there is something sinister there, the longer you leave it, the harder it is going to be to treat.

“At one time, being told you’d got lung cancer was a death sentence, but nowadays, people survive for years with lung cancer, having more or less treatment depending on their individual situation.

“I was very lucky, because not only was it found very early and was small, but as with most illnesses, the sooner somebody gets to look at it, the better the chances of there being a really positive resolution – and that’s particularly true with lung cancer.

“I’m not how I was before, but I am strong and fit and active, I look after my two-and-a-half year old great nephew, I’ve done phone befriending, I go hill-walking with friends and I am independent.

“Since my operation, I have also taken up ballet dancing, and I’m waiting on an allotment – I’ve always gardened, but this is something new. There’s a lot to be said for getting your hands in the dirt.”

Greater Manchester Cancer Alliance says the public should take particular notice of persistent and unexplained symptoms such as:

Seek advice from your GP if you are concerned. For more information, click here.

The strength of Krivii Rih steel against the misery of war 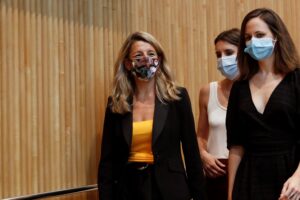 What is ‘Sumar’ and what role does Podemos have?