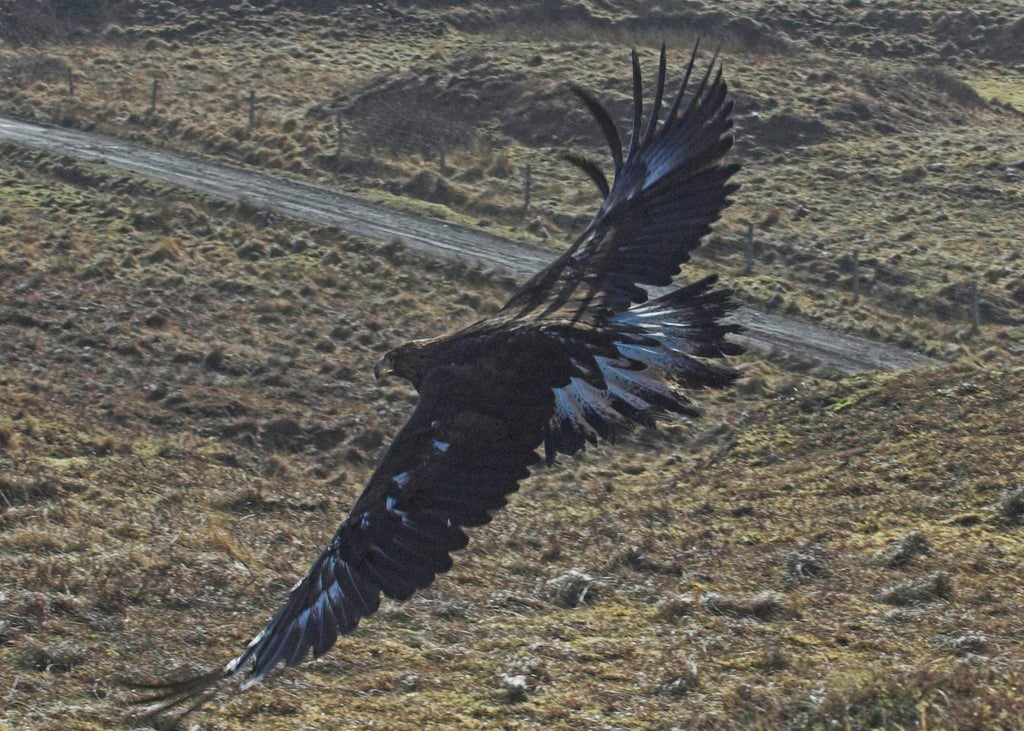 Bald and golden eagles are being wiped out by lead poisoning from guns, warns new research.

The iconic birds of prey are not in the crosshairs of hunters – but are consuming deer that have been shot, according to scientists.

They say dead carcasses contaminated by bullets are stunting both species’ comeback.

It has implications for other species, including humans whose health can be affected by eating fragmented bullets inside the game. Hunters are being urged to use copper bullets instead.

The shaggy, fierce-eyed bald eagle has been the national symbol of the US since 1782.

“But this new study is the first to show population-level consequences from lead poisoning to these majestic species at such a wide scale.”

Nearly half of the birds sampled showed evidence of repeated exposure to lead.

The findings are based on 1,210 bald and golden eagles across 38 US states including Alaska.

Lead author Dr Todd Katzner, a wildlife biologist at USGS, said: “This is the first study of lead poisoning of wildlife at a nationwide scale.

“It demonstrates the unseen challenges facing these birds of prey. We now know more about how lead in our environment is negatively impacting North America’s eagles.”

The eight year analysis in Science discovered it was “widespread and frequent” – impacting both species’ populations.

Poisoning is causing population growth rates to slow for bald and golden eagles by 3.8 percent and 0.8 percent annually, respectively.

Short-term exposure was more frequent in winter months. Previously, evaluations were only performed locally and regionally.

Both eagle species are scavengers and use dead animals as a food source year-round.

They particularly rely on them during the winter months when live prey is harder to find.

Lead poisoning typically occurs when an eagle eats lead ammunition fragments lodged inside an animal carcass or in gut piles.

Many hunters ‘field dress’ a deer they shot with lead ammunition, removing the contaminated internal organs where the animal fell.

The frequency of chronic lead poisoning increased with age. It accumulates in bone as eagles are repeatedly exposed to the heavy metal throughout their lives.

Co-author Brian Millsap, US Fish and Wildlife Service National Raptor coordinator, added: “The study’s modeling shows lead reduces the rate of population growth for both of these protected species.

“That is not as impactful for bald eagles since this endemic species population is growing at 10 percent per year across the US.

“In contrast, the golden eagle’s population is not as stable, and any additional mortality could tip it towards a decline.”

The bald eagle became a global ‘environmental pin up’ in the 1960s and 1970s as numbers plummeted from the effects of DDT.

Once the pesticide was banned half a century ago the bird began to rebound, gradually at first and then with increasing vigour.

In 2007, the US Fish and Wildlife Service removed the Bald Eagle from the federal endangered species list. Now it faces a new threat.

If a deer or other animal isn’t killed immediately and runs, eagles find it – and ingest the lead. Once absorbed in the gastrointestinal tract, it becomes toxic.

Lead poisoning can cause seizures and lead to a lack of judgment – increasing the risk of being hit by cars.

Millions of birds across the United States are poisoned by lead every year, according to the American Bird Conservancy.

The lead poisoning increases during deer season. The only solution is to educate hunters on the importance of using non-lead ammunition.

Copper bullets can be purchased online but are more expensive and difficult to find in stores.

The Bald and Golden Eagle Protection Act, established in 1940, prohibits possessing, selling or hunting the birds.

‘We have to learn the lessons of the past’: Why calling monkeypox a ‘gay disease’ is wrong and harmful