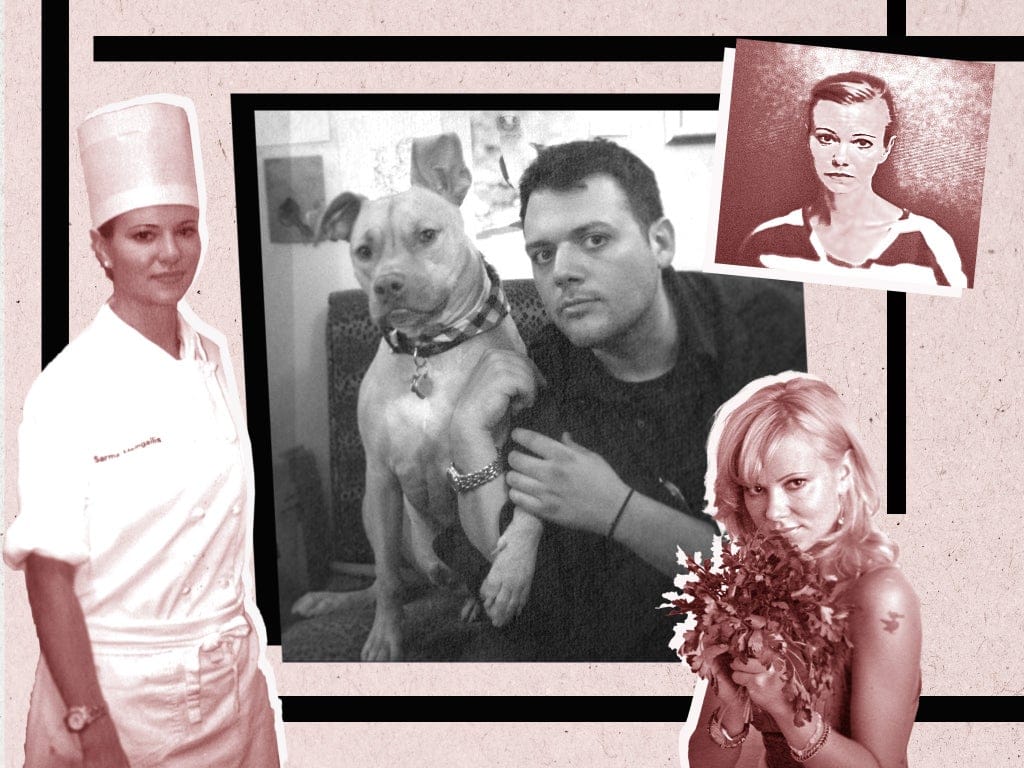 IImagine being at a crossroads: maybe you’ve made a big, risky career move, or you’ve ended a long-term relationship. You feel off-kilter and unbalanced, like everything is up in the air.

Then, seemingly out of nowhere, someone slips into your life; a friend of a friend of a friend (you think), and you both just seem to click. Next thing you know, you’re falling in love and they’re promising to stay with you forever and make all your problems go away. As long as you believe in each other, nothing will stand in your way.

But then they start to ask you for things – money, to make big life changes for them, and a flicker of doubt enters your mind. You dismiss it, they tell you you’re on a path together. And things start to spiral.

This is what allegedly happened to Sarma Melngailis, a former New York restaurateur who ran a hugely successful raw vegan restaurant, Pure Food and Wine, and is now the focus of Netflix’s latest docuseries, Bad Vegan. She reportedly fell victim to “cult-like techniques” used by her ex-husband, Anthony Strangis, which led to her becoming isolated from family and friends, giving him more than US$1.6 million, becoming a wanted fugitive, losing her business and going to jail.

But how do cults form, and what kind of person becomes a cult leader? The word “cult” has several definitions, ranging from “a system of religious veneration”, to “a person or thing that is popular or fashionable among a particular group”.

While most people associate cults with “unorthodox or spurious” religions, perhaps a better definition is one offered up by the Merriam-Webster dictionary, which is a “great devotion to a person, idea, object, movement or work”. But in order to examine why cults occur, it’s important to understand the people behind them.

People who start cults employ a range of manipulative tactics to exert “mind control” over their victims, experts have said. One such expert on destructive cults, Dr Steven Hassan, tells The Independent that cult leaders do this by constructing a false reality around their victims, which allows them to confuse and control their members.

Dr Hassan is himself a former member of the Unification Church, a new religious movement and alleged cult founded in 1954 by Sun Myung Moon. Members are known as “Moonies”, who believe the founder’s claims that he was a Korean Messiah. Dr Hassan says he was “deceptively recruited” at the age of 19 and spent 27 months as a member.

He explains that cult leaders will lie about who they are and their past, as well as deliberately confusing their victims by “breaking” their sense of self. A confused person is an easily manipulated person, he says – and it isn’t even that difficult to do. All it takes is something slightly out of the ordinary to interrupt a person’s everyday routine.

“A lot of what humans do is automated behaviour,” Dr Hassan explains. “For example, when you go out to eat, you walk into a restaurant, you wait to be seated, you get a menu, you wait for a waitress – there is an unspoken script that we follow.

“We only become aware of that script when it is violated. When something happens that’s slightly out of the ordinary, like a handshake that is just a bit too long, people get confused. In that moment, a cult leader can start giving directions that bypass somebody’s critical thinking.”

The most common subcategories that cults fall into include destructive cults, the most famous of which was the Peoples Temple, led by Jim Jones; Doomsday cults such as Heaven’s Gate, led by Marshall Applewhite and Bonnie Nettles; and political cults, which involve world leaders who have created a cult of personality, such as Russia’s Joseph Stalin.

Other subcategories include, but are not limited to, polygamist cults, which allegedly includes the Fundamentalist Church of Jesus Christ of Latter-Day Saints (FLDS Church); racist cults, which the Ku Klux Klan has sometimes been accused of being; and terrorist cults, which experts say include Al-Qaeda.

There are some cults that don’t fall into any of these. One of the most notorious groups that have been accused of being a cult, The Children of God – which included members such as the parents of Rose McGowan and Joaquin Phoenix, who were both born into it and left with their families – has sometimes been described as an “authoritarian” cult, while others have alleged it was a “sex abuse” cult. McGowan told The Irish Times in 2019 that her family decided to leave the group when “they started advocating child-adult sex”.

Another organization which has sometimes been described as a “cult” that is difficult to categorize is Scientology. The movement describes itself as religion where the ultimate goal is “true spiritual enlightenment and freedom for all”. However, it has also been accused of being a “cult of greed and power” as well as a “business” with political interests – allegations which the organization and its members deny. Famous members of the Church of Scientology include Tom Cruise, Kirstie Alley, John Travolta and Anne Archer.

While a cult usually consists of a group of people, in some instances – such as Melngailis’ – they can be formed between just the leader and one or two other people.

Strangis has never been accused of abuse or other similar charges and, through his lawyer, denied allegations in a 2016 Vanity Fair article that he manipulated Melngailis. While her lawyers de ella considered a coercive control defence, which is a form of domestic violence, the US does not have any specific laws criminalizing the behaviour, and they ended up dropping it.

Still, in an interview before going to jail for three and a half months, Melngailis said: “What happened is just something that is not well understood within the legal system… Why didn’t I run? Why didn’t I leave? Why didn’t I call the police? That’s the big question.

“Nobody talks about issues related to somebody manipulating your mind. You know, I believed these things were, in a sense, reality.”

In Bad Vegan, Melngailis claimed that Strangis took over communicating with her friends, parents and employees on her behalf. He allegedly used a false identity to retrieve her passwords from her under the guise of “security” and sent out emails under her name from her, answered her phone for her, and made her tell people nothing was wrong when in fact, everything was wrong.

According to Dr Alexandra Stein, who specializes in the social psychology of cults, cult leaders use coercive control techniques similar to those seen in abusive relationships, such as isolation, control of relationships, monitoring and humiliation.

Dr Stein is herself a survivor of a cult. At the age of 26, she joined The O, a Marxist-Lenninist political cult that is characterized by its extreme secrecy. Members use code names – Dr Stein’s was “Clare”, she revealed to The Independent in 2017 – and are under the control of the group’s charismatic leader Theophilus Smith.

She says that victims often find themselves isolated without anyone to turn to for support, which many victims of domestic violence also experience. This isolation is a key part to creating an environment in which the victim can be controlled.

“The isolation is very important,” she tells The Independent. “It doesn’t have to be physical, but the social and psychological isolation is enough. Perpetrators use secrets a lot to do this, telling followers not to talk about anything with other people because they won’t understand, or that they have the answers to everything so the follower doesn’t need to turn to anyone else.”

Dr Stein, who teaches about cults and totalitarianism at the Mary Ward Center in Bloomsbury, London, adds that leaders then alternate between “assault and leniency” as a way to “brainwash” their followers.

“A person who is supposed to be the loving figure serves the function of protection, acting as your safe space. But when this same person also unexpectedly becomes frightening or terrifying, they are no longer a safe space.

“However, because the victim is so isolated, they keep going back to them,” she says, explaining that it creates a feedback loop. “When we’re frightened, we seek out a safe person for comfort. When your loved person frightens you, you get locked into that relationship because you keep going back to get comfort from the fear.

“If you weren’t isolated, you could go to someone else. But this dynamic is super confusing and creates an emotional glue that our minds tend not to cope well with, and causes dissociative states. When someone is in this state, there’s no getting through to them, they literally can’t think because to think about the situation is to think of something terrifying without any way out.”

But when the people close to someone who is beginning to get sucked into a cult fail to intervene, it can quicken their spiral into the leader’s control. Dr Hassan warns against being complacent when something feels off, particularly if someone who was previously close to you begins withdrawing or suddenly cuts off contact.

“People often think things like, ‘She’s too smart to fall for this’ or ‘They’re an adult and they say they’re happy, so I can’t do anything about it’. But if there is mind control at work, then those things don’t apply – this isn’t a normal situation anymore,” he says.

“If you care about somebody and something out of the ordinary is happening, then you need to speak up, test their reality, find out more about who’s influencing them and do a background check. It seems like no one did that for Sarma.”

The Independent has contacted Strangis’ legal representative for comment.

If you feel you are a victim of manipulation or abuse, you can contact the National Domestic Abuse Helpline which is open 24/7 365 days per year on 0808 2000 247 or via their website https://www.nationaldahelpline.org.uk/