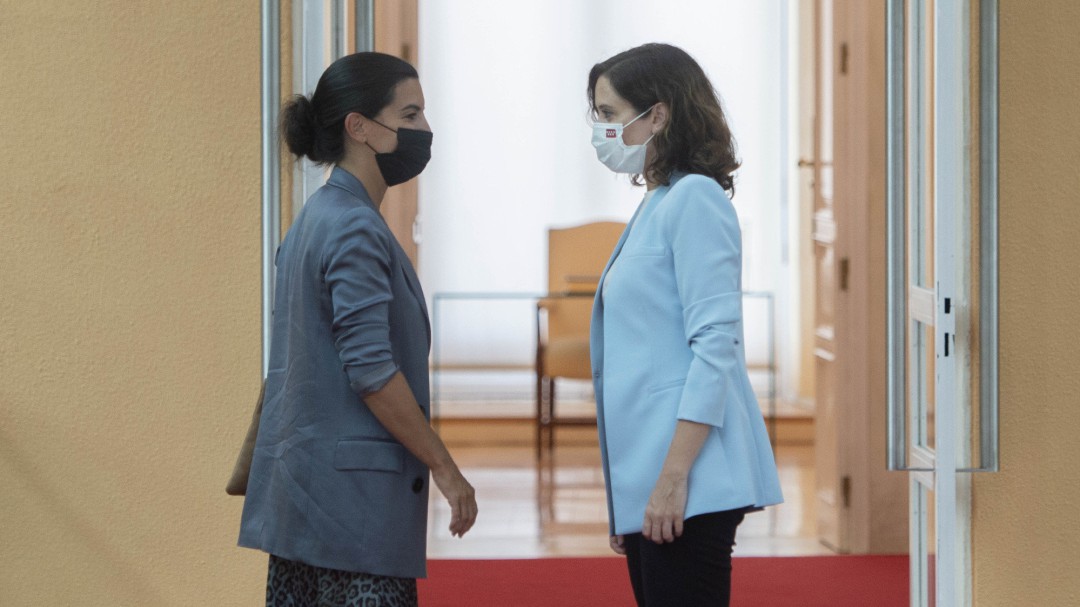 The president of the Community of Madrid, Isabel Díaz Ayuso, and Vox have closed their agreement to approve the 2022 budgets. They will be the first Ayuso accounts in three years of government. The Minister of Economy, Javier Fernández-Lasquetty, and the Vox spokesperson, Rocío Monasterio, have already stamped their signature on the document, as Radio Madrid has learned.

Many details of the agreement have not yet been revealed, but it is known that there will be 13 measures. One of them is that the Ayuso government has agreed that public education from 0 to 3 years is free, as requested by the extreme right. This request was one of the 15 premises that Ayuso and Vox closed in a first budget agreement, scheduled to be approved in March of last year, just before the early elections were called in the Community of Madrid.

Radio Madrid has published that prior agreement, in which, in addition to free public education from 0 to 3 years, there were other measures such as reinforcing the security of centers for unaccompanied foreign minors. Monastery is currently detailing the agreement, at 10 am Lasquetty is scheduled to appear. Both the Vox spokesperson and the Minister of Economy celebrated the pact at the party after the presentation of the book by Cayetana Álvarez de Toledo, which was attended by both.

These are the points present in the final agreement:

According to the agreement document, the Ayuso Executive accepts the request of Vox, which has been requesting that the non-mandatory stages be free. Although it will be progressive, not immediate. “For reasons of budgetary impact, this proposal should be deployed between three and four years,” reads the letter. What is proposed, in particular, is “to increase the amount of the educational checks / vouchers and the number of beneficiaries of the same” in the non-mandatory stages, which include from 0 to 3 years (infant), baccalaureate and training Middle Grade and Higher Grade professions.

Early childhood education is the one that takes the most part. It is expected to increase “33% aid and beneficiaries each year”, while the rest of the stages “will be 25% per year”. This measure is expected to benefit 18,090 families, because an income limit will be established, which will be set according to the average GDP of the Community of Madrid. The expected cost of the measure will amount to an additional 62.5 million euros in the full course. Monastery, at a press conference, has celebrated this measure because, according to it, “it will bring real equality.”

2. Reduction of structural and operating expenses

Some of the expenses that the Government of Ayuso undertakes to lower by 2020 are 10% of the amount destined for the promotion, “as long as essential actions are not compromised” and other costs such as administrative structure contracts or leases. They also add that “the feasibility of recasting or suppressing organs or entities” will be analyzed, although it does not specify which ones. They estimate that this will save 10 million euros.

It was one of the points that were already known. The Ayuso Executive undertakes to reduce by 10% the regional contribution to Madrid’s public radio-television, to Telemadrid. This will mean a decrease in service income by 7.4 million euros.

4. Audit to control the costs and subsidies of centers for unaccompanied foreign minors

The agreement contemplates carrying out “a specific audit” to analyze the costs of the services (legal, financial, procedural and operating) of the centers for unaccompanied foreign minors in the region, as well as the subsidies associated with these minors. The document details that “the contracting or commissioning of the audit” will begin, at the latest, in the three months following the approval of the accounts in the Madrid Assembly. This follow-up is expected to cost € 50,000.

See also  Can a long-haul holiday ever be carbon neutral?

5. Increase in the endowment of the Palliative Care Plan

It is contemplated to increase the financing of this Palliative Care Plan for people with serious health problems and / or dependency. The number of beneficiaries is not estimated a priori, but it is detailed that it will cost 5 million euros.

Another measure, which is part of the Vox ideology, is to help pregnant adolescents. The financial provision will be increased for entities that support pregnant adolescent women, “with the aim of facilitating their motherhood in adequate social conditions, while they can remain active in their work or in their studies.” It will cost an additional million euros.

7. Support for families with members with Autism Spectrum Disorders

This support will be done through support and assistance programs for families with members suffering from Autism Spectrum Disorders. It is expected to cost an additional € 1 million.

The objective of this program, according to the document, is “to promote the emancipation of young people” and that is why they are helped with financing for the purchase of housing for people under 35 years of age, who are solvent, but who do not have savings. This help will be made through a guarantee provided to the buyer, through an assurance or guarantee. An additional 9 million euros will be allocated.

This measure is in line with Plan Vive. “All existing possibilities will be studied, based on public-private collaboration, in order to mobilize all the public land owned by the Community of Madrid”, in order to increase the supply of rental housing at an affordable price. A proposal that, for the moment, has no quantifiable cost.

The Government undertakes to maintain the principle of equality in all calls for aid or incentives for employment, without any type of discrimination between applicants. It will be done both in calls that comply with requirements set by the national government or the European Union, and in those that come from funding administrations. There will be no cost.

Either the regional government with its own means or with the contracting of external institutions (such as AIReF), audits will be carried out on all the grants awarded in the last four years. The objective is “to verify their impact on the subsidized activity and the results achieved”. The procedures for hiring them will be done in the three months following the approval of budgets. The expected cost is 200,000 euros.

The Ayuso Executive undertakes to streamline “administrative actions aimed at paying providers in the Community of Madrid, respecting current regulations and attending to budget availability”. It has no quantifiable cost.

13. More security for the people of Madrid

Finally, the focus is placed on the safety of the people of Madrid. The regional government will study the possibility of appearing in court actions that deal with matters that pose a “serious risk to the personal safety of citizens or their properties.” These risks can be caused by administrative or criminal offenses, “organized by organized groups or individuals”. It also has no expected cost.