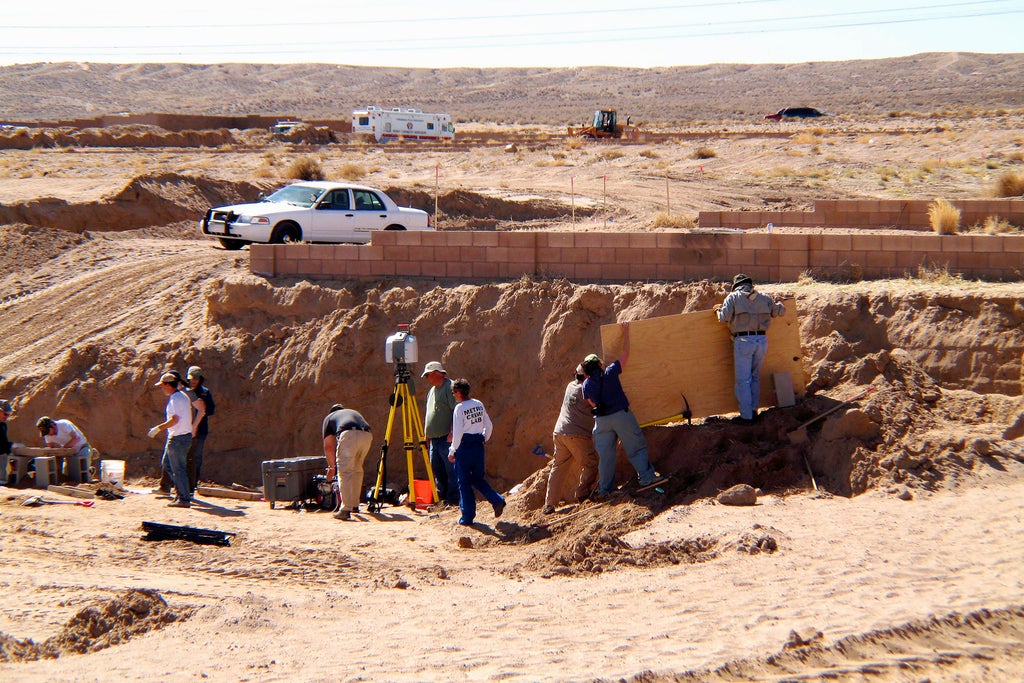 The remains of 11 women and an unborn child were discovered buried more than a decade ago in the desert on the edge of Albuquerque kicking off what would be the largest homicide case in the police department’s history.

Tips are still coming in today, and investigators said Wednesday they’re hoping to get that one bit of information — however tiny it might seem — that will help to break open the case.

“I think that we have to remember that we can never give up hope,” said Police Chief Harold Medina, who was a lieutenant on the graveyard shift when the discovery was made.

Authorities gathered to mark the 13th anniversary of the discovery of a human bone by a woman who was walking her dog on the table not far from a new housing development. It was the first of many skeletal remains that would be unearthed as part of an intense around-the-clock excavation that was followed by a nearly yearlong effort to identify the victims based on DNA and dental records.

A few years before the discovery, Detective Ida Lopez noticed women with ties to drugs and prostitution had been vanishing from Albuquerque. All of the women who made the detective’s list were among those found at the mass grave site on Albuquerque’s west side.

While many of the victims struggled with drugs, family members never imagined they would turn up dead. Some were mothers and many knew each other.

“These women were loved, each one has a unique story and their families want answers, and we are dedicated to finding those answers,” Lopez said in a statement.

The women’s names were read aloud by City Councilor Klarissa Peña, whose district includes the area where the remains were found. She said the case has been burned into Albuquerque’s collective memory and that a memorial park helps to keep the women’s memories alive.

“These family members just want closure,” she said. “We hope that there are tips out there or anybody who knows anything can help in closing this case so the families can finally put their family members to rest in peace.”

Investigators said whoever killed the women was likely charming or friendly and able to build trust with these other street-wise women. They also said the person would have been comfortable with the place that the women were buried.

Nearly 1,200 tips have come in over the years and about 200 women with arrest records for drugs and prostitution have been interviewed as part of the case. A task force is also conducting an audit of all the tips to ensure each one has been worked to the fullest.

In 2018, two extensive searches were done — one of which used ground penetrating radar based on a tip received in search of evidence of the missing women. The other search was near the original dig site and was determined to be an ancient burial ground. In 2021, another search was conducted based on a tip but nothing turned up.

Other cold case homicides are also being reviewed to see if there are similarities.

Authorities said there are “more than a few” suspects in the serial killings, noting that the number changes as tips come in and as investigators rule out possible suspects.

The Albuquerque Police Department, the FBI and the families of the women have contributed a reward of up to $100,000 for information that leads to an arrest and successful prosecution in this case.

Major Tim Keller said new information is what will lead to the case being solved.

“Sometimes we don’t have all the answers, but we’re not going to quit,” he said.